As summer is in full swing, the chances for rain and thunderstorms significantly increase, causing many fearful dogs to shake, hide and panic as they seek a safe retreat around the house from the booming thunder. It’s very tempting to seek out some remedy or medication to help these dogs out, but sometimes things may not go as planned. Acepromazine is a central nervous system depressant that is sometimes prescribed by veterinarians to help dogs better cope with fearful situations such as grooming visits, vet visits and anxiety associated with exposure to loud noises such as thunder and fireworks. As much as Acepromazine may seem effective, there are chances that this same drug meant to help your dog, will actually make things worse. 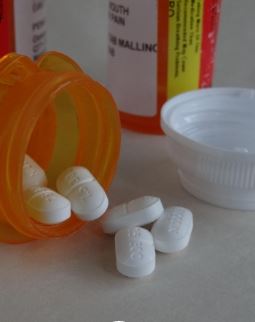 Also known as Promace, and often referred to as “Ace,” acepromazine maleate is a sedative that is frequently used in veterinary medicine for its sedative and antiemetic (effective in reducing nausea and vomiting as seen in motion sickness in dogs) effects. This drug is classified as a phenothiazine neuroleptic drug, which, according to veterinarian Dawn Ruben, simply means that it works by changing the chemicals in a dog’s brain so to change behavior accordingly. As a sedative, Acepromazine works by depressing the dog’s central nervous system; however, the exact dynamics remain unknown. There’s belief that it works by blocking the receptors (theD2 receptors) of dopamine , a neurotransmitter released by the brain that helps regulate movement, focus and attention and emotional responses. By blocking dopamine, Acepromazine should therefore help dogs suffering from fear and anxiety.

“Acepromazine works by depressing the central nervous system. The exact mechanism of action of acepromazine is unknown. It is thought to block receptors of dopamine in the brain, a chemical used for cell-to-cell communication.”~ Dr. Dawn Ruben

The Problems With Ace 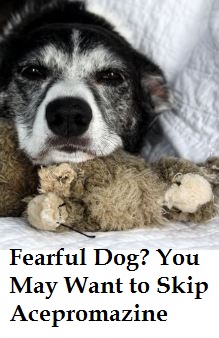 As a sedative, and central nervous system depressor, Acepromazine may at a first glance seem like a good option for anxious and fearful dogs. Indeed, still as of today, Acepromazine remains one of a veterinarian’s preferred go-to tranquilizer; however, there are some problems with its use that more and more veterinarians and board-certified veterinary behaviorist are raising awareness about. So what’s the problem with this drug? There are actually several.

At a first glance, Acepromazine may make a dog or cat  look as if he’s handling the fear well, when in reality, he just can’t show the signs or do anything about it, explains Jason Nicholas, graduate of The Royal Veterinary College in London, England and Chief Medical Officer of Preventive Vet. If we put ourselves in our dog’s shoes (or better, paws)  it’s as if we’re being aware of a fearful situation but because of the drug’s dissociative effects it doesn’t make any logical sense. As Karen Overall claims “it scrambles perceptions.” Phenothiazines such as acepromazine are sedatives but they really do not reduce anxiety, explains Gary Landsberg, board-certified vet working for North Toronto Veterinary Behaviour Specialty Clinic. Marsha Reich, another board-certified veterinarian claims “I do not use acepromazine for thunderstorms because it is not an anxiolytic– a dog is less responsive to the storm, but is just as anxious about it.”

“Acepromazine does little to nothing to help mitigate the fear and anxiety that these suffering pets experience from fireworks and thunderstorms. What it does do though, and do well, is make them unable to move and/or exhibit any of the other outward signs of their fear and anxiety. Ace is kind of like a “chemical straightjacket” in these instances.” ~Jason Nicholas 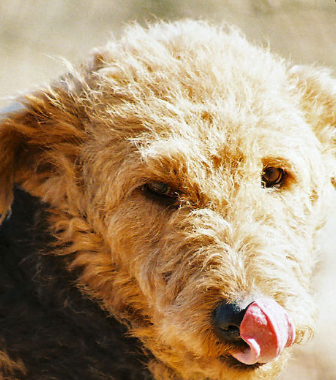 Another problem with the use of Acepromazine for dogs who suffer from fear of noises like thunder and fireworks is the fact that it seems to increase sensitivity to noises. Talk about giving something to make dogs feel better, and instead making things much worse! Veterinary behaviorist, Dr. Karen Overall in the video below explains how dropping a hemostat on a metal table will cause an animal treated with Ace to jump despite being sound asleep.

So what happens when a dog is  in a situation where there is raised awareness of the frightening stimulus, but it doesn’t make any sense and nothing can be done about it as its motor skills are impaired? It makes the situation much worse, which leads to the dog’s fear increasing, the owner reaching out for more Ace, and the dog being put in a vicious cycle of negative associations while the animal is in a state of lowered arousal and lowered behavioral response and appears ataxic (lacking voluntary coordination of muscle movement). 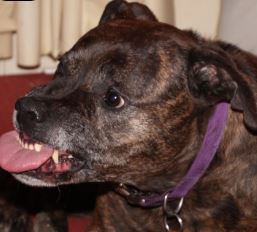 Another possible “side effect” from a behavior standpoint, involves what is known as a “paradoxical” effect. Paradoxical effect simply means that the drug would cause an effect that is opposite to the one it would normally be expected. When working for the vet, I remember seeing this word the first time in a chart. The dog was given Ace, and the owner reported that his dog instead of acting calm, was acting restless and even aggressive at times. The vet recommended the owner not give this drug again. Veterinarian Dawn Ruben warns that dogs taking this drug should be handled gently and not left alone with children due to the risk of paradoxical effects.

” I wish this medication would be placed at the far back of a top shelf and used only exceptionally…If what you need is sedation – acepromazine can be an acceptable adjuvant, but it makes most of my really fearful and really reactive patients worse, so all sorts of other drug combos can work better and do less harm than is done by the routine use of acepromazine.. ~Karen Overall

Did you know? Brachycephalic dog breeds (those with short noses and flat faces) are more prone to develop complications from the use of Acepromazine and its use can be problematic in dogs with the MDR1 gene mutation.

So if Ace has such negative effects why would vets prescribe it in the first place? It ‘s likely because Acepromazine has been used for many years so it’s tried and true and vets have been comfortable with using it. “For some reason, switching from ace to something else––even while all the research tells us it’s safer––is a stressful process for all practitioners. Knowing the ins and outs of how our favorite drug works means more safety in the short run…even though we know better choices are available when it comes to achieving a quiet animal,” explains veterinarian Dr. Patty Khuly. There’s also the price factor, as it’quite cheap compared to other drugs and clients like that. Not to mention that it’s common practice for Western medicine to suppress symptoms instead of trying to address the underlying cause. Restless dog? Give Ace. Dog won’t hold still for grooming? Ace comes to the rescue. Ace stops dogs in their tracks and we like that.  Dr. Khuly finally adds “Sedating pets without regard for what they may experience is the height of human hubris. Especially when there’s a better way. ”

So what should dog owners do if they wish to avoid these undesirable “side effects?” It’s not a bad idea to ask the vet for alternatives or better consult with a veterinary behaviorist. Alprazolam (Xanax) for instance is an anti-anxiety medication that unlike Acepromazine, doesn’t sedate the dog, explains veterinarian Dr. Betsy Brevitz in the book “Hound Health Handbook: The Definitive Guide to Keeping Your Dog Happy.” Anti-anxiety medications work best when used a long a program of force-free behavior modification. Jean Donaldson in the book “Oh Behave!: Dogs from Pavlov to Premack to Pinker” mentions Valium (diazepam) as a better choice to Acepromazine for fear of storms.

Disclaimer: this article is not meant to be used as a substitute for professional veterinary or behavioral advice. If your dog is sick or has behavioral problems, please consult with your vet or veterinary behaviorist.