A common question people ask is what is the difference between dogs and wolves? The answer is there are many differences and it is therefore wrong to assume that dogs are just wolves sharing our living rooms! Sure, dogs and wolves share 99.96 of their genes, and since they have the same amount of chromosomes (to be exact, 78 arranged in 39 pairs) this makes them capable of mating and even giving life to offspring; however, this 0.04 percent difference is enough to set wolves and dogs quite distinctly apart. Wolves and dogs are not only different from a physical standpoint but a behavioral one as well, not to mention differences in the ways they develop, form social bonds and reproduce. Following are 30 fascinating differences that sets dogs and wolves apart. 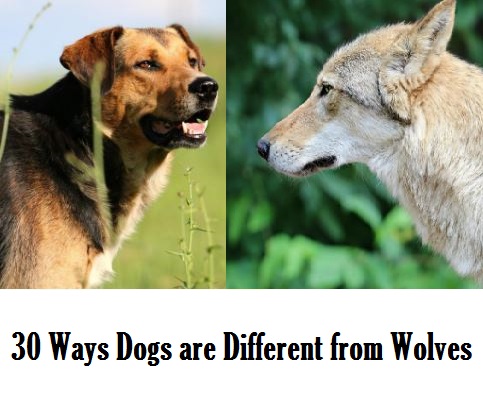 Physical Differences Between Wolves and Dogs

1) Variability/Uniformity. Sure, there are several dog breeds that look like wolves out there, namely Siberian huskies, Alaskan malamutes, German shepherds and many more, but Chihuahuas, beagles or a dachshunds are sure a far cry from looking like wolves! There’s no denial over the fact that dogs are the most varied species on earth coming in all sorts of shapes, colors and sizes, but wolves, on the other hand, are quite uniform when it comes to appearance.

2) Dogs have a head that is smaller than wolves. Generally, a dog’s head is 20 percent smaller than the head of a wolf.

3) Dogs have smaller brains compared to wolves. It is estimated that wolves have a brain that is around 30 percent larger than the brain of a domesticate dog.

4) Dogs have smaller jaws compared to wolves. Wolves need strong jaws so they can to crush bones so to reach the soft marrow, which brings us to number 5…

5) Dogs have the same type of teeth as wolves and even the same number (42). Both wolves and dogs have 20 teeth in the upper jaw and 22 in the lower jaw. Dogs however have smaller teeth compared to the teeth of wolves.

Developmental Differences Between Dogs and Wolves 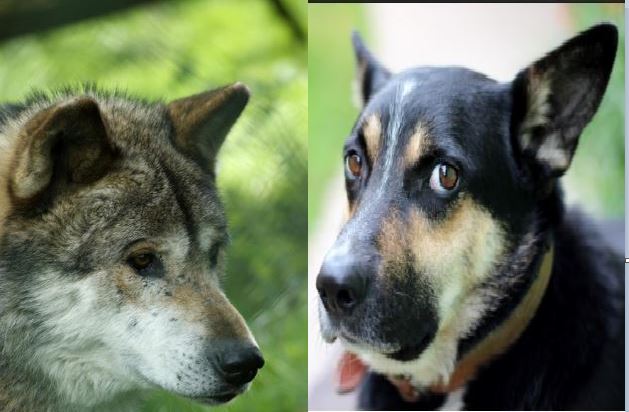 9) Generally, dogs are slower to develop compared to wolves. According to Alexandra Horowitz, puppies open their eyes around two or more weeks; whereas in wolves they open as early as 10 days.

10) Dogs enter the critical socialization period at four weeks, while wolves begin much earlier at two weeks. According to a study conducted by Kathryn Lord, wolf pups were found to be already walking and exploring at 2 weeks of age even though still blind and deaf; whereas, dog pups begin the socialization period at around 4 weeks when they already can see, hear and smell.

11) Dogs have a longer primary socialization period compared to wolves. This offers them the advantage of having more time to become accustomed to interactions with people and their surrounding environment. 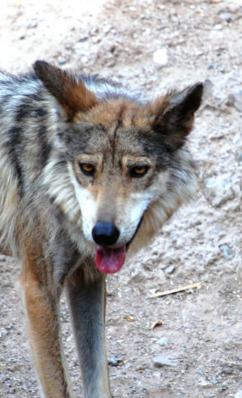 Behavior Differences between Dogs and Wolves

13) Dogs are domesticated and can be trained. Wolves can be somewhat trained, but they cannot become domesticated.

15) Dogs are predisposed to barking for various reasons, while adult wolves tend to seldom bark. Wolves though rely on many other forms of vocal communication and they use their signature howl for long-distance communication.

16) In dogs, play behavior is more exaggerated than in wolves and it’s retained into adulthood. While adult wolves may occasionally play, play behaviors in dogs are more easily stimulated.

17) When dogs are given a puzzle to solve, dogs will often look at their owners for guidance. Wolves on the other hand will try to solve the problem on their own. 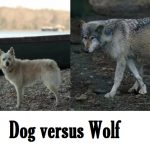 Hunting Differences Between Dogs and Wolves

19) In dogs, the predatory sequence in several breeds has been truncated which comes handy to the shepherd and hunter. Dogs may therefore eye, stalk, chase, but without killing and ingesting. Wolves need to go through the entire predatory sequence from start to finish instead in order to survive. 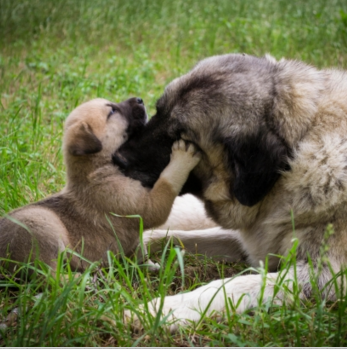 Reproductive Differences between Dogs and Wolves

20) Dogs were and continue to be selectively bred so to help suit humans purposes for work and companionship. Humans choose the best specimens to breed (hopefully!). Wolves reproduce through natural selection through Mother Nature’s “survival of the fittest.”

21) Domestication in dogs has ameliorated a female dog’s ability to reproduce. Living in the safety of a home and with the help of a breeder, litters of pups have a higher chance of surviving. Wolf pups instead must endure many challenges.

23) Female dogs (besides some exceptions) generally go in heat two times a year. Wolves go into heat only once a year.

24) Female dogs may go in heat at any time of the year. Wolves are seasonal breeders, going into heat in the spring so their offspring have time to develop and become stronger before winter.

25) Female dogs give birth in whelping boxes and their owners provide their puppies with “puppy mush” to help them transition into eating solid foods. Mother wolves build a den to raise the pups and will regurgitate their meals to help wean the pups. 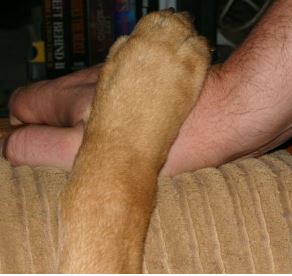 Social Differences Between Dogs and Wolves

26) Most domesticated dogs live among humans nowadays, so they can be considered members of human social groups, explains Horowitz. Their social group include their human family, other dogs, and other pets living within the household. Wolves on the other hand, live in packs and their social group comprises the breeding pair, its offspring, and several relatives. “Wolves packs are families, not groups of peers vying for the top spot… They are not alpha dominants any more than a human parent is the alpha in the family, ” points out Horowitz.

27) Generally, dogs are accepting of other dogs and will continue to socialize for the rest of their lives, even though some dogs become more reserved during adolescence and some obvious exceptions. Wolves instead tend to form tight family units and are generally not accepting of stranger wolves.

Over time, we have adapted and designed dogs to fit us and our world, and it should be strongly emphasized that they are separate to and different from wolves. We do not look at the ape world to show us how to teach our children how they should behave…we must afford our dogs the same courtesy of treating them as the species they are, and not as wolves in dog’s clothing.”~Toni Shelbourne 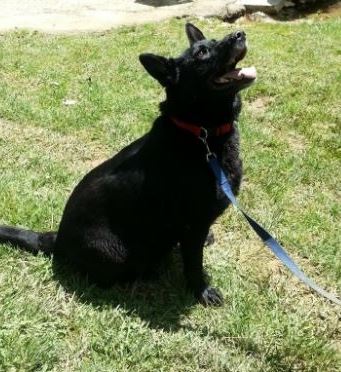 28) Dogs now live into old age when living among humans.  According to Egenvall and colleagues (2000) data from insured dogs has revealed that an estimated 65 percent of domesticated dog living in a household will still be alive after 10 years of age.  Old wolves instead are quite a rarity in the wild.

29) Various tests conducted by Brian Hare revealed that puppies were spontaneously adept at reading human gestures, whereas wolves were not.

30) Dogs are generally good at adapting to changing situations; whereas wolves are wary and do not adapt well to novelty and this tendency carries on even when raised in captivity.

As seen, even though dogs and wolves are genetically similar, we must remember that there are at least fifteen thousand years (or many more) separating them and therefore dogs are a far cry from being the socialized wolves some people  still tend to portray.

” We have enough science on dog behavior and the principles of learning that dog training should not be based on “what my daddy did” or some method arising from misinterpreted wolf behavior.  Dogs are not wolves.  They don’t act like wolves – and frankly we don’t want them to.” Lore I, Haug, DVM, MS, DACVB,