Among the many fascinating facts about dogs one that is truly amazing is the way the shoulders of a dog are structured. It is thanks to the way the dog’s shoulders are designed that dogs are able to romp around with great  stride length and flexibility. On top of walking on their toes, dogs have a special shoulder design that plays a major role in canine locomotion making them the amazing runners they are. So today’s we’ll be discovering how dog’s shoulders are designed compared to us, and what makes them truly remarkable. 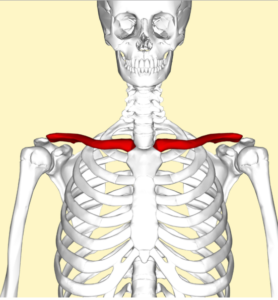 When we look at the anatomy of the human shoulder, we notice that it is composed of three bones: the collarbone (clavicle), the shoulder blade (scapula) and the upper arm bone (humerus). It is thanks to these three bones and their associated muscles, ligaments and tendons, that we are able to lift, push, pull and swing our arms. The fact that the shoulder is the most mobile joint in the human body is a double-edged sword considering that this mobility is also what makes us more prone to dislocations. Now you know why it seems like baseball players get so many shoulder injuries!

The collarbone, is the only horizontal bone in our body. See the red bones in the picture? It’s that thin, long bone that’s located at the base of the neck and that’s highly visible in thin people as the lack of fat causes a visible bulge in the skin. This is because, unlike most bones that are covered with muscles, this bone is only covered by skin. As seen in the picture, we have two clavicles, one per side in each shoulder. They are both responsible for connecting our right and left arms to the trunk of our body. 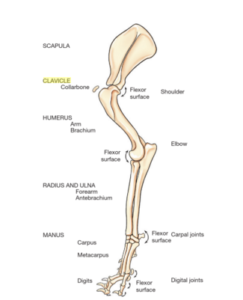 Dogs being a cursorial species, don’t have a need to lift, push or pull objects or swing their arms as we do, so their shoulder design is for the most part crafted for what predators need the most: speed and agility. Along with a dog’s spine which is capable of bending and stretching with every stride and the powerful hind legs providing forward propulsion, the dog’s shoulders are designed to increase stride length. Unlike humans, the dog’s shoulders are somewhat disconnected from the rest of the skeleton, which is why many people refer to them as “floating shoulders.” However, no body part really floats alone as a particle suspended in space. While the dog’s scapula is not attached to any bones at the top, there are several muscular and ligamentous attachments. 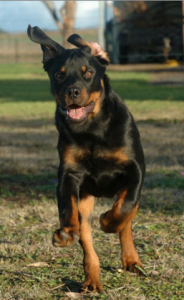 While humans, have a collarbone connecting the arms to the trunk of the body, dogs have just a rudimentary collarbone that does not articulate with the rest of the skeleton. Darryl Millis and David Levine in the book “Canine Rehabilitation and Physical Therapy” mention that a dog’s collarbone is an oval plate that measures about one centimeter or less in length and 1/3 in centimeter wide. This structure is mostly made of cartilage and it doesn’t appear in x-rays. Because of the lack of a fully developed collarbone, dogs are capable of a greater stride length so that they can run and leap, an evolutionary advantage that allowed them to be successful predators. While your dog today is fed food in shiny bowls and no longer hunts for food, you surely have admired his fascinating locomotion as he chases and leaps up for the ball you just tossed!

Did you know? Just because your dog’s collarbone is rudimentary, doesn’t mean it’s useless! According to a study, the dog’s clavicle provides muscle stability and protects the nerves and blood vessels that supply the front legs.