It’s Wednesday Word Day! Today we opened our encyclopedia and ended on the letter “B” and the page had the word “babble” which is a term we often use to depict somebody who talks rapidly and continuously in a foolish, excited way, uttering words imperfectly. So we thought to make “babbler” our dog word of the day. What does babbling have to do with dogs? Last time we checked, dogs weren’t able to talk, let alone babble, so what does it mean? Turns out, this word is part of hunting terminology and the term is sometimes used by hunters to depict certain “vocal dogs.” What are these dogs babbling about? Interestingly, they have something to say, but as the term implies, their excessive “talking” is considered disruptive both by their hunting pals and huntsmen.

“That Hound is a Babbler!”

So what do hounds have to babble about? According to the book by David Hancock, Hounds: Hunting by Scent, a babbler is described as a “noisy hound; one giving tongue when not on the line.” What does that mean exactly? Well, if we take a look at how hounds hunt, we will notice that they tend to “talk” when they’re hunting, especially when they are on the trail of the fox scent (line).  Hunters remark the “hounds are giving great tongue” when they give out cries when on a hot trail. Well, turns out a “blabber” is a hound who “talks” inappropriately and freely when exposed to all sorts of scents, when there’s no need to. Many hunters talk about these dogs in a derogatory manner, sometimes describing them as “liars” or as “having a lying tongue.” 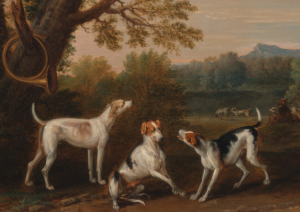 With dogs who hunt in groups like hounds, it’s interesting observing how the other members react to “blabbers.” Frank Sherman Peer in the book “Cross Country with Horse and Hound” says that the other hounds may initially rush to the babbler’s side, but then fail to confirm him. He claims that their disgusted expression after discovering the false alarm is “something almost human.” The hounds may be fooled once or twice, but soon learn though how to deal with such babblers. Indeed, J. Otho Paget in the book “Beagling and Beagles” mentions that the other hounds soon “find out so that when they hear his voice they will utterly ignore him!”

“Whereas a distinctive voice is an important asset, it is linked with the wisdom of knowing when and where to use it. ” ~Stuart A. Marks,  Southern Hunting in Black and White

Before labeling a hound as a “babbler,” it’s important to rule out other possible phenomena going on. For example, a hound who is blessed with a more acute sense of smell than other hounds may be confused for a “babbler.” The scent of a hare that walked through overnight may linger for several hours and may be picked up by a hound with a sensitive nose while the other hounds may not sense it, cautions J. Otho Paget. Other times, some hounds are accused of babbling when they’re turned loose from their kennels. In reality though, these dogs aren’t “loose mouthed,” they are just showing their joy and delight in going out for a hunt!” ‘And what’s more marvelous than dogs doing what they love best?

Did you know? The baying noises hounds make when excitedly running is known as “giving tongue” or “throwing tongue”.  Hounds who fail to “give tongue” are known as “mute hounds.” These will take off on their own, running mute without “speaking.”