Among the various structures of the brain, your dog’s amygdala plays a primary role in the way your dog interacts with the world. Your dog’s brain is ultimately the boss of his body and it cannot be denied that it runs the show, controlling everything your dog does even when he’s deep asleep curled up in a ball. The amygdala is only a small component of your dog’s brain but it plays a big role in your dog’s life. Learning more about this structure may provide you with a deeper understanding of how your dog views and experiences the world around him. So today’s let’s discover more about the dog’s amygdala, what it does and some problems it may encounter. 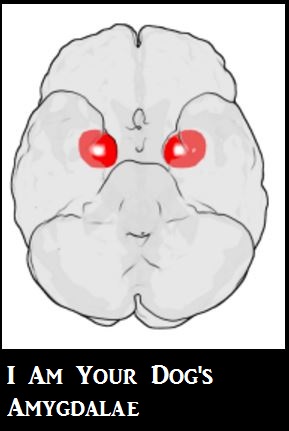 Hello, it’s me, your dog’s amygdala talking! Actually, as with many other parts of your dog’s body we come in pairs. For those word nerds out there, the plural of amygdala is amygdalae, and the word “amygdala” derives from the ancient Greek word “amygdale” meaning “almond.”

Apparently,  since we are shaped like almonds, somebody with a touch of creativity decided to call us this way. How cool is that? We are are also sometimes affectionately nicknamed “the neural nugget” considering that we are made of clusters of nuclei.

We’re the primitive part of your dog’s limbic system, a collection of special brain structures specially involved in emotions. We are therefore surrounded by some fascinating neighbors such as the pineal gland and your dog’s hippocampus.

If you’re looking for us, you can indeed find us right at the end of the hippocampus, a structure with which we exchange information.

We Work as a Threat Detection System 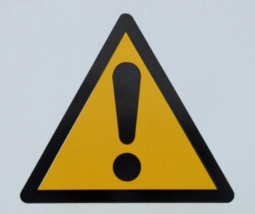 When you think of us, think about the word “threat.” It’s is thanks to us that your dog is intimidated by threats and reacts accordingly in a fearful manner. You may think, why should I be thankful that my dog has fear?

Being fearful is not always a bad thing, it’s actually good if your dog is fearful of things that can actually pose a threat to his life and well being. “Is that thing in the distance a piece of rope or a poisonous snake?” If your dog startles, it is because we gave him the signal of alarm that makes him jump. Imagine not having fear for one moment…

An experiment was once done on rats where researchers, through a procedure known as deep lesioning were able to remove the amygdalae (ameygdalectomy) of rats. Deprived from us, the rats started no longer having fear and exhibited some serious, non-species-specific behaviors. They no longer feared cats as the removal of their amygdalae, resulted in their fear memories being swiped away for good. Of course, this is not good and one can imagine how these poor mice must have been fun for the cat to play with!

So yes, fear is important as it protects dogs (and any other living being) allowing self-preservation and protection of the species. If all mice weren’t scared of cats, imagine how quickly they would quickly become extinct!

We therefore play a role in fear conditioning. If your dog has started to show fear of the stairs because he heard a loud noise while climbing them, we are responsible for creating that fearful response. We gain information from the dog’s senses and then work in unison with our next door neighbor the hippocampus. The hippocampus is responsible for storing memories of traumatic events so it sends us alert messages that causes us to react. Our teamwork therefore helps orchestrate the fear response.

“The amygdala attaches emotional significance to the information coming into the brain, and has been called the command center of the emotions of surprise, rage and fear.”~Patricia McConnell, Ph.D. 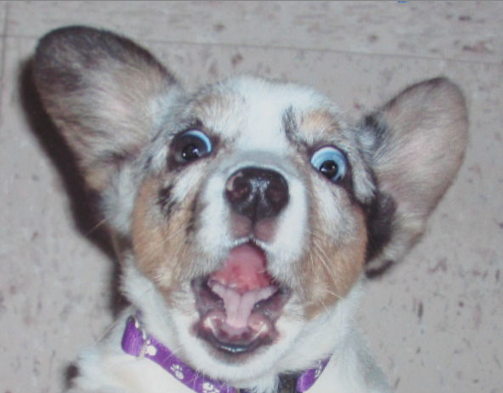 Our goal is to ultimately keep your dog safe; however, sometimes things may get out of hand.  If we happen to regularly overreact, we create fertile grounds for an anxiety disorder to set in.

” It has been hypothesized that fear is, in part, due to chronic amygdala over-reaction and, or failure of the amygdala to turn off after the threat has passed” says Karen Overall, board-certified veterinary behaviorist.

Things can get complicated because we are not really a thinking part of the brain, our job is to become alert from bad memories and just react, triggering the dog’s hypothalamus to initiate the fight and flight response. So there is no way you can really “reason” with your dog telling him it’s OK while we are in full blast alert mode.

There are schools of thought though that we can be trained to not react through exposure. The belief is that through gradual exposure, where nothing really negative happens to the dog, we might come to “learn” that there’s no threat and therefore stop going unnecessarily on alert.

Richard LeCouteur, a board-certified veterinary neurologist believes that the our reaction can at least be overridden. When the vet sticks a thermometer up a dog’s bum, “that’s in the amygdala forever,” says LeCouteur. The dog therefore develops anxiety when he goes in the car and knows he is going to the vet clinic. So does this mean that the dog will be forever frightened of going to the vet because the amygdala tells him so? Not all is lost it seems. According to LeCouteur. “The cortex can change its mind through conditioning and experience, and it can override the amygdala’s memory. Fear extinctions are stored in the cortex.”

Joesph LeDeoux, American neuroscientist says “Once your emotional system learns something, it seems you never let it go. What therapy does, is teach you how to control it—it teaches your neocortex how to inhibit your amygdala. The propensity to act is suppressed, while your basic emotion about it remains in a subdued form.”

At times, we can also be an area for seizure activity. The onset of intense and irrational fear may suggest this activity.  Fortunately, affected dogs respond to anticonvulsant therapy. “A seizure focus in the amygdala should produce inexplicable and intense fear. I have seen such cases, one confirmed by EEG and responding positively to anticonvulsant therapy,” says Nicholas Dodman for Veterinary Practice News.

“We are not, thankfully, completely at the mercy of the whims of our hippocampus and amygdala, subject to uncontrollable fears based on past bad experiences. We have some ability to take a step back and calm ourselves down. One of the parts of the brain involved in this higher-order cognition is the prefrontal cortex (PFC). This region of the brain has direct connections to both the hippocampus and the amygdala and appears able to mediate some of the signals coming from those two regions.”~Jessica Perry Hekman DVM

As seen, we play an important role in keeping your dog out of danger. OK, sometimes we may overreact, but we ultimately mean good. However, here’s some important piece of advice for you. When your dog starts developing signs of anxiety and fear, consult with a professional as soon as you can. The quicker you nip fears in the bud, the better chances those fears are prevented from putting roots and establish, insidiously wrecking havoc in your dog’s life. I hope this has helped you better understand your canine friend,