A dog’s esophagus is similar in many ways to the human esophagus. After all, it’s just a tube connecting the mouth to the stomach. However, don’t think of this tube as something very simple, the esophagus is quite a sophisticated piece of machinery considering how much it’s used on a daily basis. As other structures of the dog’s body, the esophagus can also be prone to some problems which are quite similar to certain conditions occurring in humans. So today, let’s get more acquainted with the dog’s esophagus, what it looks like, how it functions and things that may go wrong. 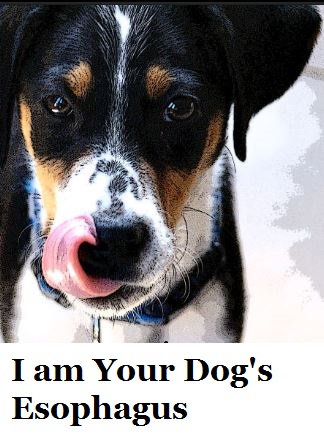 Hello, it’s your dog’s esophagus talking! As mentioned, I am  a muscular tube-like structure. You see, when your dog eats, food travels from his mouth, to the pharynx and then though me all the way down to his stomach. For this reason, I am also called “food pipe.”

I am nicely lined with moist pink tissue called mucosa and I have two two muscular sphincters one at the top and one at the bottom.

My main goal is to deliver food to your dog’s stomach. 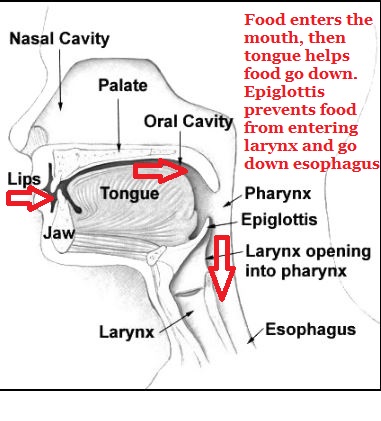 When you think of me as a simple tube that transports food from point A to point B, think again. First of all, I have to make sure that the food your dog eats is delivered to the right pipe. Yes, because failure to do so means your dog will choke as “food goes down the wrong pipe. ” You see, when your dog swallows, about 30 different muscles spring into action in a split second. As in humans, when food travels down, there are only two pipe options, me the esophagus (food pipe) and my neighbor, the larynx, which leads to the trachea (wind pipe) and the lungs.

When your dog swallows correctly, food travels down me and reaches the stomach, courtesy of the epiglottis which tilts backwards closing off access to the larynx and preventing food from entering the “wrong pipe,” that is, the trachea. At the same time the epiglottis closes, my upper esophageal sphincter relaxes and opens up allowing the bolus of chewed food to reach me. Then, a series of muscles work together to move the bolus of food towards the stomach. This all occurs courtesy of my muscles which move in a wave-like fashion which is referred to as “peristalsis.” Now, my lower sphincter relaxes and opens up allowing entry to the dog’s stomach. Of course, this is what happens when all goes well. Below you will see what happens instead when things go wrong.

Going Down the Wrong Pipe 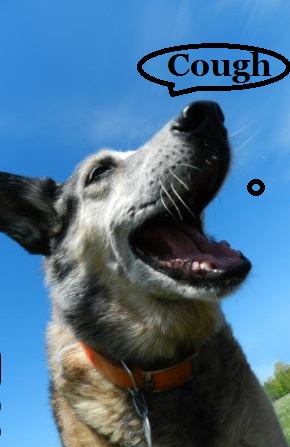 While the epiglottis and I work hard in preventing food from entering the wrong pipe, sometimes things beyond our control may happen. If we think of it, it’s not very easy for us and for dogs to breath in air and swallow food at the same time.

If a dog eats too fast or doesn’t pay attention to swallowing carefully, a particle of food may end up being aspirated into the trachea. Yes, this is what really happens when food goes down the wrong pipe!

Luckily, your dog’s coughing reflex will kick in and soon things will go back to normal. The cough reflex is so effective in clearing the airway that sometimes your dog may cough and you’ll see a piece of kibble flying out of his mouth (and your dog will happily pick it up and ingest it again, yay, jackpot!)

Even though dogs may not choke too often, it’s not a bad idea to learn how to do the Heimlich maneuver on dogs too.

Remember how I mentioned how my cricopharyngeal muscle opens when food is around and closes when it’s not? Well, sometimes this muscle may not relax and open up enough to allow the passage of food. Generally, according to Merck Veterinary Manual this is due to an inherited defect, meaning that it’s passed down genetically, but in some instances, this condition can occur in adult dogs without a history of being predisposed to it genetically. This neuromuscular disorder may cause dogs to have a hard time swallowing solid foods and liquids and may lead to complications such as gagging, regurgitation and even aspiration pneumonia, where food or liquids are accidentally inhaled into the lungs. Fortunately, this condition can be treated through corrective surgery. 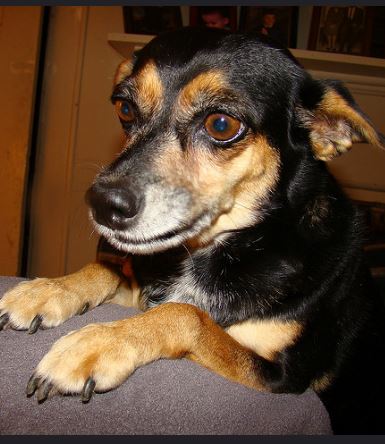 Sometimes, there are problems with my muscles responsible for producing those important wave-like motions that allow delivery of food from me to your dog’s stomach. When this happens I stretch and lose muscle tone and dogs develop what is known as “megaesophagus.”  This translates into the poor affected dogs having quite a hard time. With the food having a hard time reaching the stomach, it lingers by me and decays or is eventually regurgitated. Unlike vomiting, when a dog regurgitates, food will come out passively with little effort and will appear as if just chewed up. Often, repeated regurgitation in dogs is a tell-take sign of this condition. A risk associated with megaesophagus is aspiration pneumonia which may occur when food sits too long around me and it’s accidentally inhaled by the dog’s lungs. To prevent this from happening, dog owners may feed small portions and keep their dogs in a sitting position for around 10 minutes using what’s known as a Bailey chair for megaesophagus. My lack of muscle motion can sometimes be due to an underlying condition known myasthenia gravis, a neuromuscular disease causing weakness in various parts of the dog’s body.

Inflammation of the Esophagus 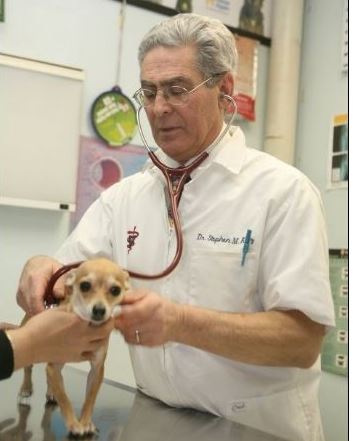 Sometimes, I may get inflamed and dogs may develop a condition known as esophagitis. This can happen when I am exposed to to stomach acids or the dog ingests some foreign object that causes me trauma. I can also sometimes get inflamed from ingestion of certain drugs. If this ever happens, your vet will treat your dog based on the underlying cause. For example, if stomach acids were making me irritated, medications meant to reduce stomach acid may help. Your vet may also recommend feeding several meals throughout the day. In severe cases though, a stomach tube which bypasses me, may be needed to provide the dog nutrition.

Sometimes I can become narrow after some sort of trauma, exposure to toxins or repeated inflammation and reflux of stomach acids. When this happens, affected dogs may regurgitate, drool and have problems swallowing and pain. In this case, I may need intervention so that I can be stretched out through some sort of balloon-shaped catheter that widens me or some other type of surgery.

Some dogs will eat the oddest things, and it’s not that unusual for things to get stuck in my narrow passages. Fish hooks, pieces of rawhide, toys and other objects sometimes get stuck in me causing a an esophageal blockage. Since food sometimes cannot make it past me, affected dogs will drool, gag, swallow repeatedly and regurgitate. It’s important to see the vet  sooner than later as things can get worse later on. Once at the vet, the vet may retrieve the object using an endoscope with an extension meant to grasp it and remove it.

As seen, I do a whole lot but I can also get into trouble as well.  Thankfully, cancer will rarely affect me. According to Pet Cancer Center, cancer of the esophagus accounts for less than 0.5% of all cancer affecting dogs. However, it’s important to see your vet as soon as you notice any signs of problems with me such as trouble swallowing and regurgitation. Your vet can check me out using an endoscope which entails the insertion of a flexible tube that has a small camera that allows him to visualize what may be going on. So please don’t forget about me and keep me in mind every time your dog effortlessly swallows those tasty treats!

Did you know? In dogs, the esophageal muscles are entirely striated (which means they are under voluntary control) so that they can voluntary regurgitate to feed their young.

Disclaimer: this article is not meant to be used as a substitute for professional veterinary advice. If you suspect your dog is suffering from some form of esophageal problem, please wee your vet for proper diagnosis and treatment.