Dog owners who own more than one dog may at one time or another have to deal with dogs who are jealous of the other dogs coming close to the owner for attention. Many dog owners have been saying it for years, “my dog is jealous of other dogs coming near me,” but back in time, jealousy was thought of exclusively being a human trait. Yet, recent studies have found that what the dog owners were thinking was right, dogs do seem to feel jealousy, and if it’s not exactly jealousy, it’s something pretty close to it. Today we’ll discover more about the study and take a closer look into the dynamics behind dogs who are jealous. 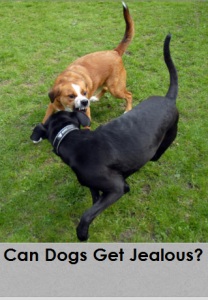 In the past, dogs weren’t believed to be capable of feeling jealousy because jealousy was always thought as being a feeling that required “complex cognitive abilities.” “Scientists tend to separate emotions into two categories: primary and secondary. Primary emotions, such as fear, anger, disgust, joy, and surprise, are considered to be universal. Secondary emotions such as guilt, shame, jealousy, and envy, are thought to require more complex cognitive processes.” explains Stanley Coren.

A dog has always been thought of not being capable of  thinking in complex terms such as the  anticipated loss of something of great personal value that’s associated with feeling jealousy.  In order to feel jealousy the dog must think something in terms of: ” I better be careful, by looking at some past events, there’s a risk that my owner will start thinking that Scruffy is much better than me. I must take action to prevent this from happening.” However, dogs may be capable of feeling a more primordial form of jealousy, a more “in-the-moment” form versus the after-the-fact “mulling over” form, requiring more complex cognitive abilities. According to Clinician’s Brief this basic form of jealousy may have evolved from a need to “secure resources and as a survival mechanism for species with siblings.” In a recent past article we talked about sibling rivalry in dogs and the interesting revolutionary role it may have played.

“Many people have assumed that jealousy is a social construction of human beings – or that it’s an emotion specifically tied to sexual and romantic relationships. Our results challenge these ideas, showing that animals besides ourselves display strong distress whenever a rival usurps a loved one’s affection.” ~Christine Harris

What the Study Says 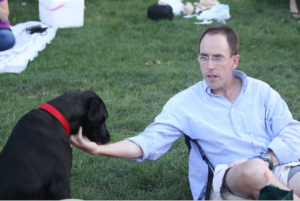 The study, which was modeled from a study on human infants manifesting jealousy when their mothers interacted with a lifelike doll, was published in PLOS ONE and was conducted by University of California San Diego psychology professor Christine Harris and student Caroline Prouvost. The results of the study suggested that there might be a more basic form of jealousy affecting dogs. The dogs were found to exhibit behaviors suggestive of jealousy such as getting in between, pushing or snapping when the owner manifested affection towards an animated stuffed dog that barked, whined and wagged its tail. These manifestations were less likely to occur when the owner manifested interest in an object such as a carved pumpkin or a book.

“Our study suggests not only that dogs do engage in what appear to be jealous behaviors but also that they were seeking to break up the connection between the owner and a seeming rival.” ~ Christine Harris

Signs of “Jealousy” in Dogs 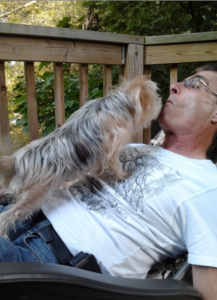 While more research may be needed before determining with certainty that dogs act out of jealousy, one things is for sure, when dogs feel that their owners are giving too much attention to another dog they give signs of not “liking” the interaction. The signs may be pretty obvious while some others may be more on the covert side.

Some dogs will approach as soon as they see another dog receiving attention and they’ll wriggle their way in between. Others may try to do things to revert the attention from the other dog to them such as pawing, rolling over or grabbing a ball and running over to the owner with it. Some other dogs may sit with their back facing their owner, perhaps even leaning against him, telling other dogs in doggy language “this person is mine, stay away!” just as they may do when resource guarding a bag of dog food. Should another dog approach, the dog may growl, lunge forward barking or even bite. Whether we call it jealousy or a form of resource guarding, one thing is for sure, it’s something that should be tackled as in some cases it may get out of hand. 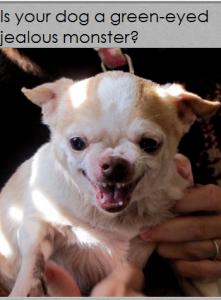 Tackling Jealousy of Other Dogs

There are several ways jealousy of other dogs can be tackled, but one thing is for sure: using physical punishment and harsh techniques can make the issues much worse. Physically correcting the jealous dog may lead to defensive behavior or even a re-directed bite. On top of that, the jealous dog  learns that when the other dog comes close he’s punished so he comes to dread the other dog’s presence even more.  So what’s a good protocol? A good starting place is teaching both dogs to promptly respond to a verbal cue such as “lie down” or ” go to your mats!” at the very first signs of trouble so to diffuse any tension before things start building up. This is a good management practice to prevent squabbles in multi-dog households, but it’s also important to go to the root of the problem.

Obviously dogs with a history of serious fights, should be kept separated and owners should consult with a professional; however, for the correct implementation of behavior modification and for safety purposes, consulting with a qualified dog behavior professional specializing in force-free techniques is recommended for mild cases too. The sooner the jealous dog behavior is tackled, the better.

As seen, studies seem to suggest that dogs may show signs of a basic, primordial form of jealousy, but these studies aren’t conclusive. What may seem to us jealousy may sometimes be something else. For many years, we assumed that dogs were acting guilty and many dog owners had their own stories of dogs acting ashamed or guilty for doing something they weren’t supposed to, but recent studies found that dogs aren’t acting guilty but just responding to our behavior.

There are many interesting reads about animals manifesting “jealousy.” Below is an interesting video of wolves greeting a human. What do you see here? Do you think it’s jealousy, pure and simple resource-guarding, a matter of who gets to greet first or perhaps re-directed aggression due to high arousal levels? We would love to hear your thoughts in the comments section below!