We know of dogs who can detect cancer, predict seizures and recognize low blood sugar, so it shouldn’t surprise us if dogs were even able to detect pregnancy! While there are currently no studies or hard evidence to prove us that dogs are capable of telling when a woman becomes pregnant, there is surely a lot of anecdotal evidence coming from women who claim to have noticed relevant changes in their dog’s behavior after becoming pregnant. The next question therefore is: How can dogs sense pregnancy in humans? Until new studies come out, for now we can only make assumptions based on what we know. In this article, we’ll be looking at human pregnancy from a canine’s standpoint. 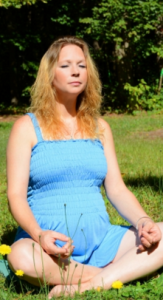 During pregnancy, it’s not unusual for women to go through an emotional roller coaster ride. According to the American Pregnancy Association, most mood swings are experienced during the first trimester of pregnancy, and then again in the third trimester as the body gets closer to giving birth. The mood changes are a mix of stress, fatigue and major metabolic and hormonal changes which affect the level of neurotransmitters, important chemicals responsible for regulating mood. It’s not old news that dogs are deeply in tune with their owners and studies have shown that dogs are able to recognize emotions in humans by combining information from different senses.

“People and dogs have forged an incredibly close connection over thousands of years together. Along the way, dogs have been bred for certain traits, and “one of the traits would be the ability to read us.” ~Marc Bekoff

A Whiff of Hormones 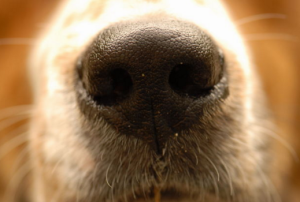 While dogs may still be far from replacing an early pregnancy test, dogs may be capable of smelling hormones associated with pregnancy. Pregnant women experience dramatic increases in their estrogen and progesterone levels, the main hormones associated with pregnancy. Just to get an idea, consider that according to Healthline, during one pregnancy a woman will produce more levels of estrogen than she has ever produced in her entire life! A rapid increase in estrogen levels occurs in the first trimester and peak levels are reached during the third trimester.  Progesterone levels are also very high during pregnancy. Blessed with powerful sniffers, it’s very likely that dogs can detect these massive changes in a pregnant woman’s body chemistry.

“Given what we know they are able to perceive with their nose, it’s a bit hard to imagine that they can’t detect at least some of the many hormonal changes that accompany pregnancy in a person living in their house.”~Karen B. London, PhD 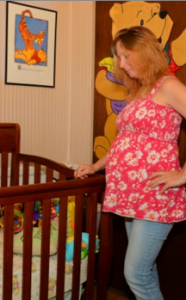 If dogs haven’t  figured out about pregnancy yet, they’ll likely get the big wake-up call once they notice big changes in their routines. Pregnant women may start going to bed earlier, eat more frequent meals, use the rest room more often and they may start moving things around to create a whelping box..ahem..meant to say, the nursery. On top of that, they may no longer walk their dog as often as before and other family members may starting taking over certain chores. Dogs, being the routine oriented beings they are, will most likely notice all these abrupt changes–and likely won’t like them.

“Just like people, certain pets are very resilient when it comes to adjusting to changes in life; others less so.” ~Dr. Wailani Sung, board-certified veterinary behaviorist. 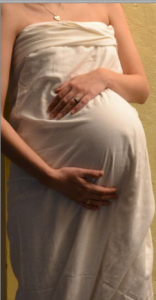 As pregnancy advances, most women will end up changing their posture at some point. This is inevitable. Starting from the second trimester, the body makes adjustments to accommodate the growing baby. The back will curve more and the shoulders will also move back to make up for shift of the center of gravity and growing belly, explains Myra Wick, obstetrician, gynecologist and editor in chief of Mayo Clinic Guide to a Healthy Pregnancy. As pregnancy advances, these changes in posture will cause movements to also get more awkward. Dogs, who are masters in noticing the smallest subtleties of our bodies, most likely take notice of these changes! 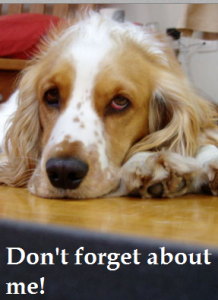 Dogs tend to pick up on things we wouldn’t expect them to and this makes them even more amazing. While we don’t know if  they can predict that in a few months there will be a new human in the home, for sure in some way or another they understand that something’s brewing. Their reactions to these many changes may vary. Dog behavior during human pregnancy may result in the following behaviors:

Luckily, most dogs eventually adjust to the many changes that come with the onset of pregnancy in their owner, and right when they thought they got a hang of things, a screaming baby comes in the house. Luckily, there are many things dog owners can do to help them adjust and get used to a new baby. Paying more attention to the dog, providing a good training and exercise regimen and making gradual changes to their routine instead of abrupt ones can help them better adjust and feel reassured. For dogs having a hard time, enlisting the help of a trainer/behavior consultant prior to the baby’s arrival can help. There are also special programs offered by different organizations that provide counseling. A popular one is the Dogs and Storks program.