Whether it’s a roll of toilet paper or a pile of junk mail, many dogs enjoy shredding paper just about as much as playing with a toy, what gives? For a good reason, several dog owners have granted their dogs the nickname of “Shreddy” or “Confetti”due to their abilities to shred things into pieces. Sure, watching a dog shred paper into pieces can be quite fun, but it might not be too much if it involves your homework, your daily newspaper or some important documents and you must then pick up all those minute pieces! Of course, you can train your dog to help you pick them up, but if you don’t make the activity rewarding enough, most dogs will just abandon the room and leave you on your own cleaning up the mess, 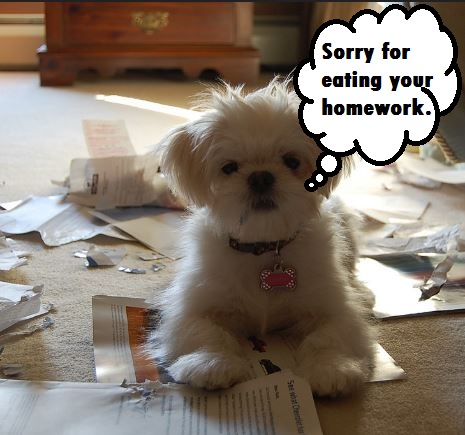 A Matter of Sensory Enrichment

Dogs in general, but in particular, puppies and young dogs, are often on the lookout for novelties or anything that provides them with some level of sensory enrichment. Just the mere sensation of holding paper in their mouth may feel rewarding, but there’s often more to that.

Mail can be interesting because it’s covered in a variety of scents and bubble mailers may be fun to pop and then shred into pieces. Paper rolled up in a ball stolen from the waste basket is fun to pat, mouth and chase and toilet paper roll is fun to unroll and then shred.

Tearing paper into pieces fulfills a dog’s ancestral need to eviscerate and tear apart prey animals. Even though dogs are domesticated, they have inbuilt motor patterns reminiscent of the old days when they were hunting and paper may fulfill a dog’s needs to grab, bite, shake and dissect.

A box of tissue paper may therefore be fun to “tug” with and grab to empty it of its contents, which obviously will be then mercilessly torn apart. Paper dishes are fun to hold on to and “kill” with several head shakes. All of these paper-related products are extremely inviting to your dog, unveiling the the “tissue paper predator” in your dog who can’t help himself but jump into the whole fun and rewarding activity of shredding paper to pieces.

Did you know? According to Forrest Wickman the popular excuse “my dog ate my homework” possibly originates from as early as 1905, when a clergyman pulled his clerk aside after a service to ask him whether his sermon seemed long enough. The clerk reassured  him that it was fine and of the right length, when the priest relieved said “I am very glad to hear you say that because my dog got a hold of my sermon and ate some of the last pages.” Soon, the saying got quite popular and become the infamous excuse used by countless students when they failed to turn in their homework.

A Word About Boredom 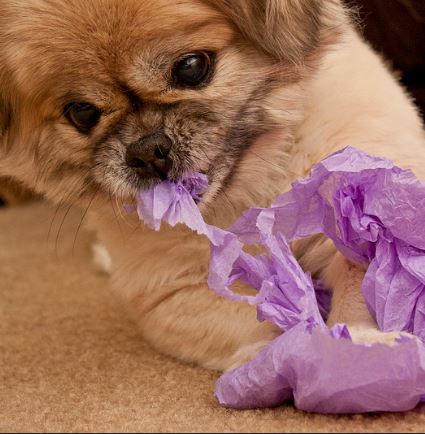 As seen, tissue paper, toilet rolls, newspapers and paper dishes are appealing to dogs, but they may be particularly appealing to bored dogs in search of something to do to keep occupied. And for those attention-seeking dogs, picking up some paper from a wastebasket or stealing a roll of toilet paper may be a way to grab their owner’s attention when they are feeling bored and socially deprived.

A word of caution though is needed here. Many people are aware of the popular adage “a tired dog, is a good dog.” This saying is often misinterpreted, giving people  the misled notion that “If I exercise my dog enough, he’ll be good for the rest of the day.”

No, exercise will not automatically grant your dog a halo over his head and magically transform him into a dog who says “no, I won’t shred this tissue paper, cause all my energy has been drained.”

Just as you would enjoy doing crossword puzzles or read a book after going to the gym, your dog is entitled to still feel like shredding paper after going for a hike. Shredding paper can actually be a relaxing way to end the day and most dogs do it when they are comfortably lying down. Sure, exercise may cause your dog to calm down and want to sleep more, but don’t expect exercise to cause him to become apathetic and disinterested in his surroundings, that’s a depressed dog or a sick dog, not a tired dog!

Warning: while your dog may just have fun shredding paper, consider that if the paper has remnants of something tasty on it, your dog may feel compelled to ingest it. There are countless stories of dogs ingesting napkins with pizza sauce or cupcake wrappers. 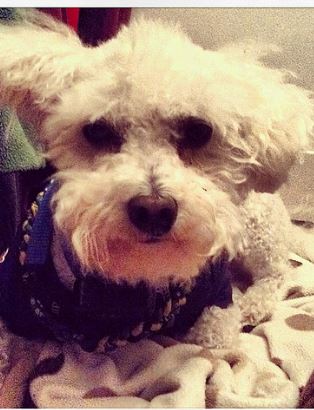 Owners of pregnant dogs may witness their dogs shredding paper and other objects to pieces as whelping day gets closer. This behavior stems from instinct; mother dog is simply replicating what she would have done out of a domestic setting, which is building a maternal den.

Basically, when getting ready to give birth, a dog’s ancestors would have dug up a place to raise their puppies so they were safe, warm and dry. Puppies, being altricial, are born in a pretty much helpless state; basically, they are deaf, blind and unable to regulate their temperatures, so the use of a den was a good choice to up the pups’ chances for survival.

Even as today, mother dogs still retain the instinct to build a den. Owners of pregnant dogs often observe how, as the birthing day nears, their dogs are prone to start digging on couches, sofas and in closets and shredding cloth or pieces of paper for the purpose of building a maternal den.

These behaviors are referred to as “nesting behaviors” and they are reminiscent of when the puppies were kept safe in a den until they reached about 10 to 12 weeks of age. Past this age, the pups would then start using their dens less and less and rely more on special rendezvous areas that can be compared to open-air kindergartens.

Did you know? The instinct of creating a nest, isn’t necessarily a sign of pregnancy. False pregnancy in dogs may also evoke nesting behaviors in intact dogs who recently went into heat but didn’t get pregnant. 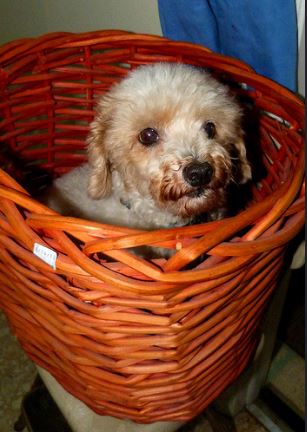 Help, my dog shreds paper and eats it, what should I do? Some dogs unfortunately take shredding paper a step further and end up also eating it. Obviously, this is not good as it may cause digestive upset and even lead to a blockage, which can lead to costly surgery.

The best option to stop a dog from eating paper is to simply shut the bathroom door, invest in wastebaskets with lids and keep tissues out of reach, in places that even a jumping dog can’t reach. Think of your puppy or dog as a toddler who is crawling around and at risk for getting into things he shouldn’t have.

Providing interactive toys that can be stuffed with treats can help provide mental stimulation; however, just because your dog has a fun chew toy, doesn’t mean that he’ll ignore a tissue paper that just fell on the floor!

Studies have shown that dogs are attracted to novelty and even when presented with new toys, their interest tends to wane after a few seconds. So on top of keeping paper out of reach, it’s worthy training your dog the leave-it and drop-it cue just in case you ever happen to accidentally drop something he shouldn’t have. Teaching your dog to trade the paper in exchange for a tasty treat can also come handy when he gets a hold of other things.

Last but not least, for those die-hard paper shredding dogs, it’s worth mentioning the behavior to the vet. In some cases, medical problems or nutritional deficiencies may cause a dog ingest non-food items.

“Tiny chunks of paper are not likely to do harm. But, if a whole piece of paper was eaten it definitely could act as a foreign object and cause an intestinal obstruction.”~Dr. Marie