There are several dog breeds with hair covering their eyes, and many people wonder whether these dogs are bothered at all by all those hairs and if they are even able to see. One of the most popular dog breeds known for having fur over the eyes is the old English sheepdog which is required by breed standard to have “the whole skull well covered with hair.” Whether these dogs can see or not is often a subject of debate, but more and more people are recognizing that their dogs do much better when their facial hairs are removed or tied up in what’s known in grooming circles as a “top knot.” 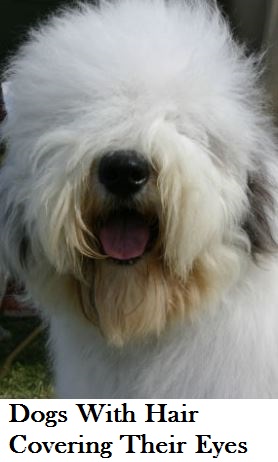 Breeds with Hair Covering Their Eyes

Many of these dogs are working dogs which may makes one wonder how on earth they can get anything accomplished with all that hair covering their eyes, but when watching an old English sheepdog in action herding a group of sheep, one can see how their constant bouncing around helps move those hair out of the way, as seen in the video at the bottom of this article.

Did you know? The hair that covers the dog’s face and eyes is commonly referred to as “fall.” 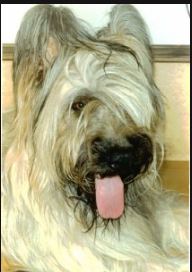 Breed standards are basically written descriptions portraying the ideal features required in a specific breed.  Many breed standards have strict requirements when it comes to how dogs must look. The goal of most breed standards is to preserve a traditional look but often these standards conflict with the dog’s well being and are therefore subject of debate. Not adhering to these standards can often make the difference between a dog who has success in the show ring and a dog who is disqualified. The rules are often quite strict when it comes to coat colors and styles.

For instance, the American Kennel Club breed standard for Old English sheepdogs requires that these dogs have the whole skull covered with hair. Shaving that hair seems out of question for those who show dogs as the standard clearly says “Neither the natural outline nor the natural texture of the coat may be changed by any artificial means except that the feet and rear may be trimmed for cleanliness.” 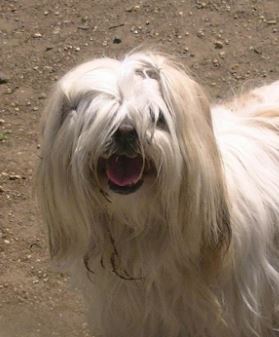 As seen, the hair falling over the dog’s eyes is a feature is highly cherished and considered a desirable show point in the show ring. Many owners of such breeds have belief that just because their dogs were born with such long hairs, they are not harmful since they must have been deliberately selected for good purposes. For quite a while there has been belief that the purpose of keeping the hair long was to protect the eyes from the effects of sunlight. This belief has been further reinforced by the fact that when the hair is lifted to expose the eyes, the dog’s eyes reflexively respond to the light by blinking and tearing.

This natural, photo phobic reaction has therefore led owners to come to the erroneous conclusion that the eyes need to be left covered, when in reality these dogs are reacting in such a way to bright light because of the hairs  constantly covering the eyes in the first place, explains world-known veterinarian, Michael W. Fox.  Another physical effect of the hairs covering a dog’s eyes is the constant irritation to the eyes which are prone to developing chronic conjunctivitis, corneal ulcers and other eye problems.

“Popular mythology claims that if you cut the “shaggy bangs” exposing his eyes, the Old English will go blind. Rubbish! An innately watchful creature, this dog likes to see what is going on just as much as we do. For that reason, you will often see them with hair pulled back and fastened with an elastic or barrette.” ~Canine Review – August 2012 issue 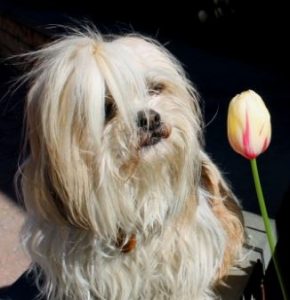 On top of eye problems, those hairs almost constantly covering the dog’s eyes may also predispose dogs to behavior problems. These effects on behavior also contribute to a welfare problem that should be kept into consideration. Unable to see well and discern details of what is going on around them, dogs with hairs covering the eyes may suffer from behavior effects such as skittishness, defensive behaviors and unpredictability. According to Fox, once visual occlusion was corrected by moving the hair away from these eyes, dramatic changes in behavior occurred, turning skittish dogs into emotionally stable companions. Talk about the solution being “right in front of your eyes!”

Several people claim that dogs do just fine with their eyes covered with hair because they can rely on their other senses, such as their sense of smell and sense of hearing to detect stimuli in their environment. However, dogs were blessed with their wonderful eyes for a purpose: seeing! Dogs rely on their eyes to communicate with one another, and they do best when they perceive the world around them using ALL the senses they were gifted with. Something worthy of therefore asking is “If you had all that hair in front of your eyes, could you see?” The answer is obvious, so if shaving a dog’s “fall” is not an option, putting it up in a neat top knot with elastics, barrets or clips can provide a wonderful compromise; basically, a win-win situation for all.

“When working with a long-coated breed such as the Old English, I watch coat movement. If the hair moves over the eyes, or around the mouth, I assume that the dog is making some kind of expression. I then watch the rest of his body language to see if I can understand what he is trying to say.”~Mary Stout, dog trainer.