According to James Serpell, Professor of Animal Ethics & Welfare at the School of Veterinary Medicine, University of Pennsylvania, the dog is the most variable living mammal on earth, coming in many shapes and sizes, therefore it’s not surprising if there are so many anatomical differences among one dog and another. It’s therefore not surprising that we have quite a variety of different head shapes in dogs including wedge heads, deer heads and apple heads. Today’s spot of honor though is dedicated to the egg-shaped head, which is quite unique and therefore found only in a couple of dog breeds. 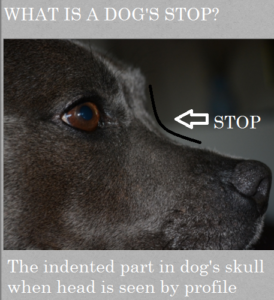 What exactly is an egg-shaped head? As the name implies, it’s a head that has an oval appearance that resembles the shape of an egg or a rugby or American football. The head’s outline is therefore oval, curving gently downwards and there is a lack of hollows or indentations. Basically, an    egg-shaped head totally lacks a stop.

What is a stop? It’s that indentation that starts from the dog’s forehead and ends at the muzzle that is commonly seen in most dogs. It’s particularly evident when the head is seen from one side. In the picture to the right, you can clearly see a dog with the stop. It’s that dip in the dog’s forehead right between the eyes and the muzzle. 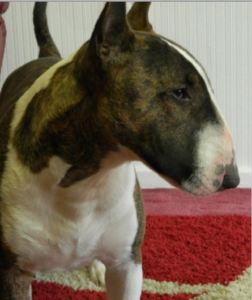 What dog breeds have an egg-shaped head? There seem to be only a couple. In the bull terrier, the egg-shaped head is its most recognizable feature along with its triangular eyes which gives this breed its desirable “varminty” expression. According to the American Kennel Club standard for this breed, “Full face it should be oval in outline and be filled completely up giving the impression of fullness with a surface devoid of hollows or indentations, i.e., egg shaped. In profile it should curve gently downwards from the top of the skull to the tip of the nose.” 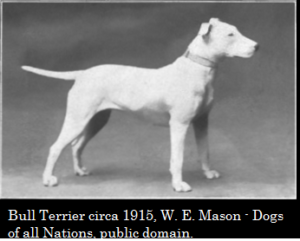 In the mid 19th century, James Hinks of Birmingham, England, started crossing existing bull and terriers with his white bulldog  “Old Madman” and various”English white terriers” which are now extinct. He also mixed in other dog breeds. The products of his breedings were white dog with better legs and a nicer head. Back at that time, these dogs were called the “Hinks breed” and the “White Cavalier” but they didn’t have an egg-shaped head yet. Hinks aimed for a gentleman’s companion rather than a pit fighter, so he focused on producing white dogs meant to sit alongside gentlemen as they drove their carriages around parks. There is belief that Dalmatian blood was added for elegance, and then borzoi and collie blood was added too so to elongate the head and reduce the stop. The first modern bull terrier produced in 1917 was “Lord Gladiator” which had no stop at all. Soon, most bull terriers specimens were selectively bred to be without stops.

Did you know? At the time the bull terrier was created by Hinks, the British were ruling India and Pakistan and brought along bull terriers and English White Terriers, creating the Indian Bull Terrier and the Pakistani Gull Terr, which many consider as being similar to the original Hinks Bull Terrier without the exaggerated head shape of contemporary show bull terriers. Today, there’s a renewed interest in recreating the old Hinks bull terrier.