Whether you are familiar or not with dog flews may largely depend on what type of dog breed you own or have owned in the past. Some dogs are known for having quite some heavy flews while in some others, the flews may be barely noticeable to almost non-existent. But what in the world are dog flews and what are they used for? No worries, dog flews are nothing odd or unusual. According to the American Kennel Club, the term is used to simply depict the upper lip of certain dogs which are particularly pendulous at the inner corners. A dogs lower lip is therefore simply called the “lower lip,” while those upper lips that cover the dog’s teeth are called “flews.” 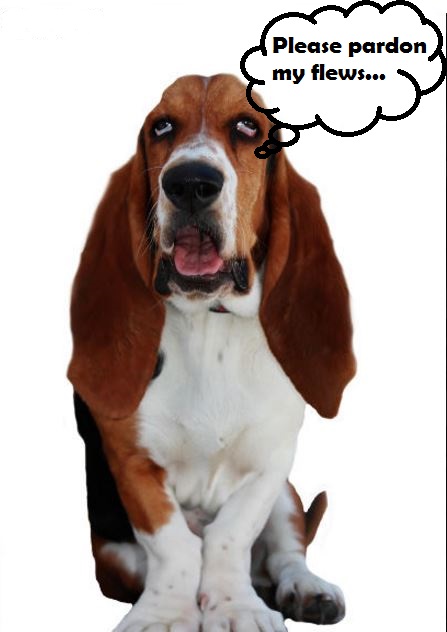 Some Hounds Have Heavy Flews…

What dog breeds are known for having particularly pendulous flews? Perhaps the most notorious dog breed with flews is the bloodhound, but there are many others.

The American Kennel Club talks about flews in many of its breed standards. Many of these breeds are in the hound family.

For instance, the basset hound is described as having lips that are pendulous,” falling squarely in front and, toward the back, in loose hanging flews.”

The Black and Tan Coonhound is depicted as having flews that are well developed and with a “typical hound appearance.”

Another breed with pendulous upper lips is the American English Coonhound having flews  that cover the lower jaw when observed from the side.

Not all hounds though have flews, for instance, in the beagle standard the lips should be free from flews.

“Flews is just a fancy word for a dog’s lips.”~ Margaret H. Bonham

But They’re Also Present in Other Dogs. 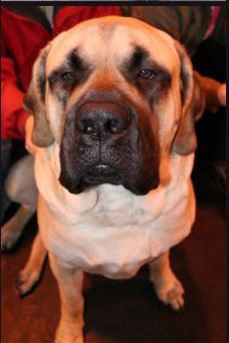 Several other non-hound dog breeds are known for having developed flews, but they might not be as developed as in certain hounds.

The bull mastiff is known for having flews, but per standard they shouldn’t be too pendulous.

The Clumber Spaniel is described as ideally having flews in the upper jaw that are strongly developed and tend to overlap the lower jaw giving an over all “square look” when observed from the side.

The Dogue de Bordeaux is known for having flews that are moderately pendulous yet retractile.

In the Saint Bernard dog breed instead the flews are portrayed as being strongly developed and slightly overhanging.

And then you have the  bulldog, with “flews that should be thick, broad, pendant and very deep, completely overhanging the lower jaw at each side.”

Did you know? In Golden retrievers, overly pendulous flews are frowned upon for a practical purpose: they interfere with this breed’s efficiency in picking up game with its mouth, explains Caroline Coile in the book “The Golden Retriever Handbook.” In addition, heavy flews  are also more likely to collect feathers. Not good. Indeed, the breed standard for the Golden clearly indicates “no heaviness in flews.” 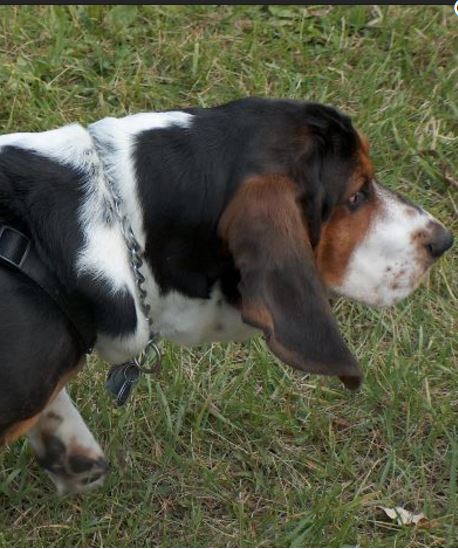 It’s not a coincidence that many dog breeds equipped with pendulous flews are scent hounds.

These dogs have made of sniffing the world their area of specialty, making them the sniffing machines of the dog kingdom.  And their bodily features are sure equipped to help them!

First off, their noses are equipped with larger cavities compared to other types of dogs,which ultimately allows them process scents better.

Secondly, their  droopy ears and dewlaps are thought to further help capture and collect scents from the ground stirring them upwards at nose level.

Finally, their pendulous, droopy lips further aid  in trapping smells, allowing those precious scent molecules to reach their destination: to the almighty nose and beyond!

“When bassets are trailing, their ears often drag on the ground and stir up scents. The large folds of skin on their jaws hold the scents close to the nose.” ~Cari Meister

But May  Also Contribute to Drooling. 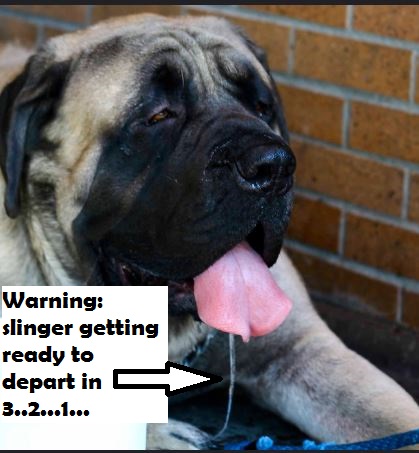 The shape of a dog’s upper lip can surely play a role in how predisposed a dog may be to drooling. Many owners of dogs with particularly developed flews have gotten used to cleaning up what are known as “slingers;” basically, strings of drool that attach to floors, ceilings and walls every time slobbery dogs  happen to shake their heads.

It’s very difficult to come by a Saint Bernard with a dry mouth. Many seasoned dog owners though have simply learned to deal with the drooling issue. “You just always carry a towel and learn to live with it,” explained a fancier to the American Kennel Club Gazette.

Coping mechanisms aside, those slingers are not to be be underestimated: Barbara Meyer explains in her blog that, left alone, this spittle has the tendency to dry into a rock-like hardness and that she heard a dog owner speculating that it might be of interest to NASA for the purpose of gluing down the tiles of their space shuttles!

“Flew patrol. If applicable, check flews and pendulous lips for trapped food and debris. You never know—you might even find Amelia Earhart in there.”~ Billy Rafferty, Jill Cahr 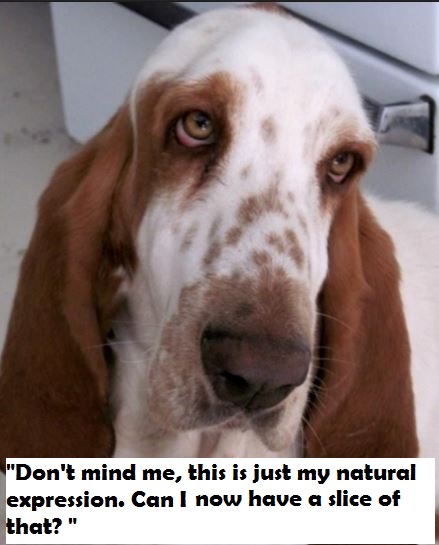 From dogs with hair covering their eyes, to dogs with bob tails, through selective breeding, dogs have undergone quite some changes when it comes to looks.

After all, humans have been tinkering with genetics for quite a long time, selectively breeding dogs based on their working functions but sometimes also based on looks.

It’s inevitable therefore for some features to affect dogs’ lives and their ability to communicate. Even dogs with flews are somewhat deprived in the communication department.

For instance, the thick pendulous flews of the bloodhound can interfere with their ability to exhibit certain facial expressions.

While these dogs are capable of snarling, that is, lifting their upper lips to show their teeth, they have quite a hard time exhibiting expressions that are more subtle, such a those involving the corners of their mouths, observes Matthew Hoffman, in the book :”Dogspeak: How to Understand Your Dog and Help Him Understand You.” 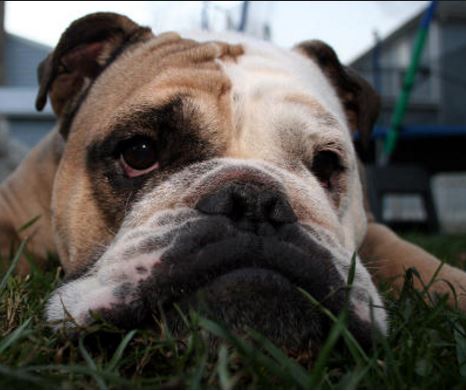 But People Find them Irresistibly Adorable!

Because for many dogs with pendulous flews it can be challenging drawing up the corners of their mouths as other dogs do, people have a tendency to perceive them as being sad, even though they are not. However, let’s face it: these dogs’ gloomy mugs and facial folds are also what many dog owners find irresistible!

However, we must finish up with some words of caution: it’s always best not to commit to dog ownership based on a dog’s looks alone.

Good research about the breed is always paramount to avoid unnecessary heartaches. Learning about a dog breed’s temperament, health and whether the dog’s needs for exercise and mental stimulation match with your lifestyle, is always something wise to do when it comes to making choices and picking your ideal furry companion.