Hey, what’s that foot pad doing all alone on the dog’s front legs, right above the wrist? One may wonder at this point whether it’s a vestigial structure, in other words, an anatomical feature that no longer seems to have a purpose in the dog’s life. Last time we checked, it just sat there and Rover didn’t seem to put it to good use. However, just because we haven’t seen our dogs putting that foot pad to use, doesn’t mean that it’s useless and not worthy of existing! So today, we’ll be discovering the fascinating function of a dog’s carpal pads. 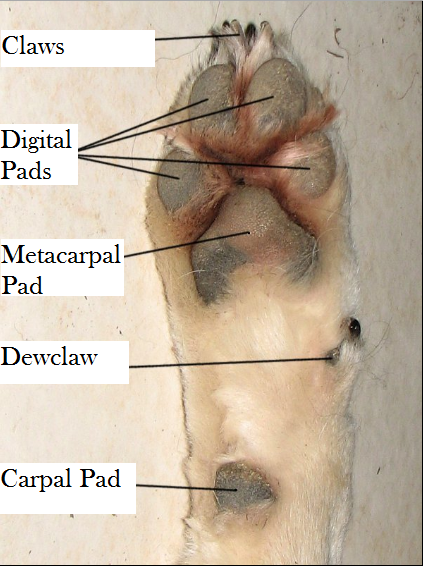 A Lesson in Anatomy

To better understand the function of the dog’s carpal pads, let’s first learn more about paw pads. Upon lifting your dog’s front paw (avoid doing this if your dog doesn’t like having his paws handled) you will notice several paw pads.

The largest of all is the central heart-shaped metacarpal pad surrounded by the several smaller digital pads associated with each toe. These paw pads are made of thick layers of fat and connective tissue and comprises five (yes, you heard it right five!) layers of skin so your dog can walk comfortably over several terrains. A little bit higher, on the inside of the leg is the dewclaw, another digit with its associated nail.

Then, hanging around the wrist area,  you’ll find the dog’s carpal pad. This pad is similar in structure to the other paw pads but it doesn’t have an associated nail, it’s only found on the dog’s front feet and it’s also known as “stopper pad.”

Do these little hints help you get an idea about what’s the original purpose of the dog’s carpal pads?

Did you know? According to the book “Peak Performance EBook: Coaching the Canine Athlete, by Canine Sports Productions, the skin on the dog’s foot pads is the thickest skin on your dog’s body. 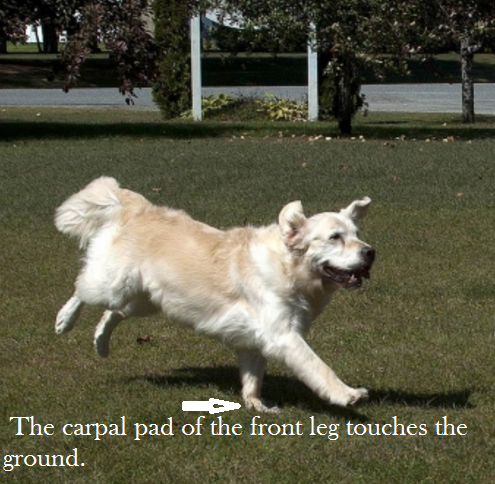 So far, we know that a dog’s carpal pads hang around the dog’s wrist area, that they are made of very tough skin and that they are only present on the dog’s front legs. We also know that they are sometimes referred to as “stopper pads.” So what’s the purpose of these pads? If you are still scratching your head, no worries! Their functions aren’t as obvious as we barely can see them in action unless we can witness stop action movements when dogs run at full speed.

According to veterinarian Chris Zink, in the midst of when a dog canters, there’s a brief moment when the carpal pad makes contact with the ground as the other front leg and the rear legs get ready for the next stride. During this time, should the dog decide to make a quick turn or stop abruptly, the carpal pad, along with its associated dewclaw, provides extra traction, and should the dog decide to stop, it’ll work as a braking device, hence its name “stopper pad.” 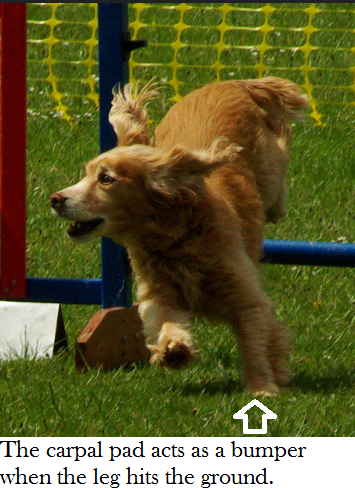 If you also watch carefully as your dog lands after a jump, you may also notice how the carpal pad makes contact with the ground.

In this case, according to the book “Peak Performance EBook: Coaching the Canine Athlete” the carpal pad functions as a bumper or cushion as the leg hits the ground.

Last but not least, the dog’s carpal pad may also help dogs stay balanced and avoid falls when dogs are walking on steep, slippery slopes.

As seen, those carpal pads are functional and quite important too!