Yes, dogs and dog owners can go through a honeymoon period just like couples do when at the beginning of their relationship everything seems deliriously perfect. The phenomenon is most commonly observed during the transitional period of adjustment occurring before a newly rescued dog “settles in.” The new dog owners may make remarks such as: “Oh, this dog is perfect as can be” or “he’s settling in very nicely!” but as with the honeymoon period in couples, this idyllic phase is often destined to end. As problem behaviors emerge, dog owners may feel puzzled and frustrated by their “altered relationship” with their new dog which started out so seemingly positive yet is now falling apart. 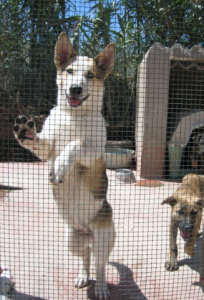 As mentioned, the honeymoon period phenomenon is more commonly observed in rescue/shelter dogs as they adjust to a new environment. It generally lasts a month, but according to veterinary behaviorist Karen Overall, it can go as long as 3 to 5 months. This post-adoption period usually begins with the dog behaving quite well during the first weeks and months.

During this time, the dog’s behaviors are somewhat inhibited and suppressed. Then, as the dog adjusts and “makes himself more at home,” dog owners may start seeing the emergence of behavioral problems such as chewing, excess barking or growling when a toy is taken away.

Dogs may seem angelic before they get their footing, so if behavior problems start to appear after a few months, get help from your veterinarian and/or a specialist immediately!! The earlier the help, the faster the dog turns around.” Dr. Meredith Stepita, DVM, DACVB 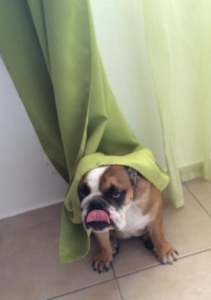 What causes the honeymoon period?  There may be several explanations. Dogs who have been surrendered have gone through a lot of stress and going to a new home entails lots of changes. When dogs face stress, they may act in uncharacteristic ways such as appearing more subdued and reserved around people and other animals. As they adjust to their new surroundings and their stress hormones return to normal levels, their real personality may eventually shine through, sometimes revealing the same undesirable behaviors that caused their previous owners to surrender them in the first place.

Another potential cause are dog owners who feel sorry for the dog and are overindulgent in the first days. They allow the dog to beg at the table and climb on furniture but then later on, they regret it. When they then try to implement new rules, they may not be consistent enough and may struggle as the dog doesn’t listen. Newly adopted may go through a “trial phase” where they’re seeing which behaviors they can get away with and which not. Behaviors that are reinforced (even inadvertently) by the owners will strengthen and repeat. This applies to both rescued dogs and foster dogs.

“By the end of the month, if you haven’t carefully managed your foster to be sure the behaviors you like are the ones being reinforced, you may see the increasingly noticeable presence of undesirable behaviors. What rescuers refer to as seeing “the real dog” after one month may just be those behaviors becoming established over time through reinforcement.” ~Pat Miller 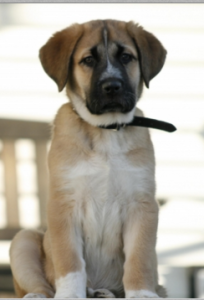 Even new puppy owners may go through a “puppy honeymoon period” taking place shortly after the puppy has been improving in the potty training department. The puppy is no longer having accidents and he’s learning not to chew on shoes, so the puppy owner pats himself on the back for doing a good job.  Not that fast though! Fast forward  a few weeks or months, and the puppy hits the adolescent stage and the puppy owner has an abrupt wake-up call. The puppy who was once obedient and eager to please has now started to pose “a deaf ear” to the owner’s requests and has also started to develop new fears and phobias. While in human couples the end of the honeymoon period may lead to breakups and divorces, in the dog world it may sadly lead to a one-way trip to the pound.

“People often find that adolescence is the most difficult stage with which to live. According to the National Council on Pet Population Study and Policy, nearly half of dogs surrendered to shelters are between the ages of five months and three years.” Sue Brown.

Surviving the End of Honeymoon 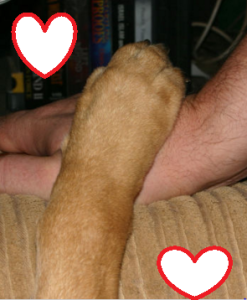 There are several effective ways to survive after the honeymoon period ends. The best option is to prevent problem behaviors from emerging in the first place. From the first day your new dog comes home, make the house rules clear and use positive training methods to inform your dog which behaviors are desired from him. Establish a predictable routine, limit stressful events, manage the environment to prevent rehearsal of undesirable behaviors, and most of all, make sure you and your family are consistent.  Many new dog owners often tend to spoil the dog too much the first days, and they may pay the price for their overindulgence later.  Of course, all these tips can apply to puppies as well! If you have recently adopted a dog or are having trouble with your adolescent puppy, don’t ignore problem behaviors hoping they’ll go away on their own; in most cases, they’ll only get worse! Enlist the help of a force-free trainer/behavior consultant for proper guidance.

Did you know? The honeymoon period may also refer to newly diagnosed diabetic dogs. Although it doesn’t happen commonly, the term is used to depict the period during which a dog’s ability to make insulin returns for a while.