Sure, it’s helpful to train a puppy not to jump, chew and beg at the table from an early age, but teaching bite inhibition is paramount because it can prevent future problems and even make a difference between life and death. When puppies come to our homes, generally around 8 to 12 weeks, they should have already learned the ABCs of bite inhibition through repeated feedback attained via their interactions with their mother and litter mates.  Today, we will discover how puppies learn bite inhibition.

What is Bite Inhibition? 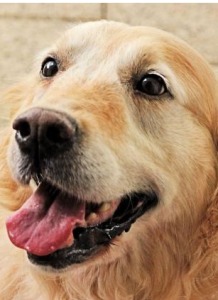 Dogs are equipped with strong jaws and sharp teeth reminiscent of the old days when they killed their prey, teared up meat and cracked bones. Thankfully, dogs can be taught how to inhibit their bites so their teeth won’t cause harm. Bite inhibition entails learning to develop a soft mouth. As puppies mature, through their social interactions with their mothers and siblings, they learn to moderate the strength of their bite.

Learning bite inhibition is very important because animals do not have an innate predisposition to gauge the strength of their jaws. Fortunately, the ABCs of bite inhibition are learned naturally while the puppy is around his mother and siblings. Through consequences, the puppy soon learns that “when I bite hard, all fun things end.” 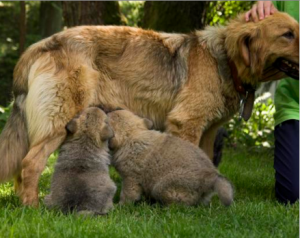 The Milk Bar is Closed

As the puppies grow, they reach a certain point around 3 and a half weeks of age when they no longer need to depend much on mother dog’s milk. Nature has marvelously intertwined the process of weaning with bite inhibition. As the puppy’s razor sharp milk teeth come out, nursing starts getting painful for mother dog. At some point, as soon as she feels her skin being nipped, she will get up and move away from the pups. 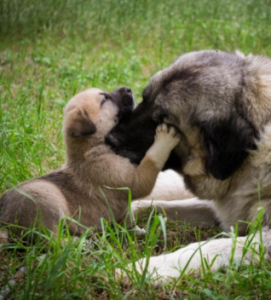 Play is an important life lesson of its own. By playing, puppies learn socially acceptable behaviors and how to apply restraint despite excitement. When puppies are still in the litter, they learn the ABCs of bite inhibition by playing with their litter mates and mother. Should a puppy bite too rough, the other puppy will emit a sharp yelp and withdraw from the game, giving the rowdy pup a little time-out.

This life lesson is further emphasized by mother dog, who may play a bit with the pup, but won’t take rough puppy mouthing. She will get up and leave the moment the pup gets too rough. Day after the day, the puppy soon learns that if he wants to continue to play, he must learn how to gauge the pressure of his mouth more and more.

A Matter of Negative Punishment

Through the repeated interactions with mother dog and siblings, at some point, puppies will learn that biting roughly has an unpleasant outcome: everything good ends. The puppy bites mother dog too hard during nursing? Mother dog gets up and leaves. The puppy nips his playmate too hard? The playmate squeals in pain and leaves. What do these events have  in common? They’re based on negative punishment, also known as subtracted punishment. What does this mean?

According to the Association of Animal Behavior Professionals negative punishment is “A behavior change process in which the subtraction of a stimulus during or immediately following a response class member, results in a decrease in the rate or frequency of the response class on subsequent occasions.” In more simple words, here’s what happens: the puppy’s rough biting behavior decreases in its rate or frequency because every time he bites, something is removed (subtracted). By losing access to milk and his playmate, the puppy soon learns that rough biting isn’t worth it. 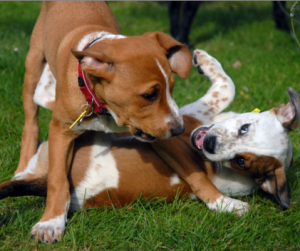 Puppy classes are a place where the puppy can further learn to inhibit his bite. Dog owners should not skip this opportunity as bite inhibition is something that needs to be taught early. Once a puppy loses all his milk teeth, it may be too late to teach this skill. The jaw will be strong enough to cause damage and the other dogs may react violently to the hard bites. If the puppy hasn’t learned a firmly anchored, reflexive level of bite inhibition by the time of puberty, it may be too dangerous for him to play along with other dogs, explains Alexandra Semyonova  in the book “The 100 Silliest Things People Say about Dogs.”

Good bite inhibition is the most important quality of any companion dog.  Moreover, a dog must develop bite inhibition during puppy hood, before it is four and half months old. ~Ian Dunbar

After learning the ABCs of bite inhibition from his mother and siblings, the new puppy owner must take over the task and inform the puppy that people’s skin is even more sensitive! Therefore, the puppy must learn that bite inhibition requires further refinement. To teach it, owners should absolutely refrain from engaging in any aversion-based methods such as holding the puppy’s mouth shut, tapping its nose or giving the puppy a shake, as these methods can trigger defensive biting and affect trust.  Often, puppy owners are advised to yelp and stop playing just as the pup’s litter mates did. While this may work with some puppies, it may not work with all. Some puppies may get more aroused and will bite even more if their owners scream and withdraw their hands quickly upon getting nipped too hard. Why is that?

Nicholas Dodman has a great explanation. In the puppy’s eyes you become the equivalent of a large squeaky toy, an entertainment piece that activates upon being nipped. Soon, the puppy learns to nip you just for the pleasure of watching your response! And no wonder the nipping repeats! In this case, rather than decreasing the behavior through negative punishment, it’s actually being reinforced through positive reinforcement! A better option may be to just stop playing, no drama, simply turning the back to the puppy and even leaving the room if the nipping persists. Repetition after repetition (bite inhibition isn’t something learned overnight), this should give the puppy a strong message. “I won’t interact with you when you’re mouthing that hard!” At the same time, puppies need lots of positive feedback when they’re biting gently and interacting with hands in an appropriate manner.

When a dog is presented with an unpleasant stimulus or situation, his first instinct should be not to bite. Ideally, the dog should resort to other forms of ritualized aggression before resorting to biting. It’s paramount to never suppress ritualized aggression in dogs such as growling or snarling as this practice may lead to a dog who bites without warning. Rather than punishing a dog for growling or snarling, it’s best to consult with a force-free dog behavior professional. Growling, snarling and snapping are outward ritualistic manifestations of an internal turmoil that need to be addressed by going to the root of the problem.

Ritualization is a series of conventions that evolve in an animal species to allow the resolution of conflict with reduced risk to all participants. ~Jean Donaldson 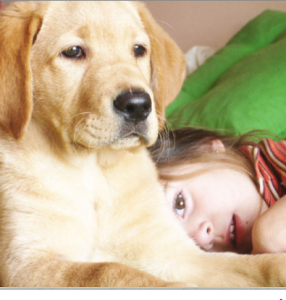 Good bite inhibition doesn’t mean that your dog won’t never nip or bite (even the most saintly dog can bite!), but should he manage to, his bite should cause little or no damage, explains Ian Dunbar in his book “Before and After Getting Your Puppy.” Bite inhibition is therefore a sort of umbrella policy, an extra liability insurance on top of a dog’s inclination to use ritualized aggression. Bite inhibition and socialization go hand in hand for their vital role in shaping the puppy’s future and preventing behavior problems. The American Veterinary Society of Animal Behavior reminds us that “behavioral issues, not infectious diseases, are the number one cause of death for dogs under three years of age.” By socializing a puppy and teaching good bite inhibition, it’s possible to reduce the risk of serious behavioral problems later in life.

It’s therefore paramount to teach a puppy bite inhibition. The “priming” period occurring when the puppy is with his mother and siblings allows an advantage for new puppy owners who can continue teaching the puppy to further refine the force of the puppy’s bite. The initial goal is to teach the puppy to inhibit the force of his bite, while afterward the focus should be on reducing its frequency. The more people involved in training bite inhibition, the better the pup will generalize. Puppy classes and consultations with reputable trainers can help provide guidance. Luckily, teaching proper bite inhibition should not be an arduous task as puppies come into this world with weak jaws and a developing brain which paves the path to learning a stellar level of bite inhibition without inflicting damage.

Bite inhibition is what makes the difference between a moment of stunned silence and a trip to the nearest emergency room for the victim (and perhaps the euthanasia room for the dog).~ Pat Miller