The Nova Scotia duck tolling retriever is the smallest member among the retrieving breeds and people often mistaken this dog for a small golden retriever. Unlike other retrievers though, this breed has a unique hunting style that makes it stand out from the crowd. As the name implies, this breed specializes in hunting down ducks, but what makes this dog quite remarkable is the way these dogs interact with them. The job of most retrievers is to simply retrieve downed birds and return them to the owner, hopefully delivering them with a soft mouth. The duck tolling retriever instead adds a special twist to duck hunting, bringing the art of duck hunting to a whole new level. 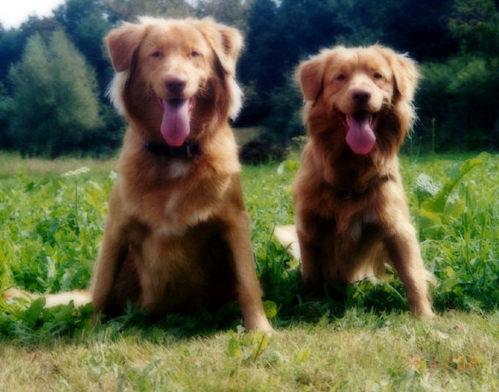 The Nova Scotia duck tolling retriever engages in what hunters refer to as “tolling.” No, this has nothing to do with those pricey highway or bridge fees!

The term instead refers to a hunting practice that relies on luring waterfowl with the use of decoys. After all, in order to hunt ducks, one must first find a way to attract them, otherwise countless hours would be spent hiding behind a bush!

Decoys can come in many shapes and forms, the most popular perhaps being lifelike ducks meant to catch the attention of passing ducks. The people of Nova Scotia though depended on very special decoys, small, fox-like  dogs who made the art of “tolling” a way of life.

Did you know?  The  definition of the term tolling derives from the Middle English word “tollen” which means””to draw” or “entice.” 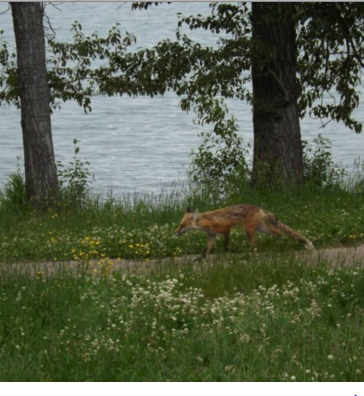 How can a dog attract ducks? It doesn’t really make sense that a dog would attract ducks considering that they are prey. It appears that the Nova Scotia duck tolling retriever must have borrowed a special hunting technique from the astute fox.

Red foxes are known for prancing around the shoreline when ducks are at a distance. Being curious animals or perhaps, seeking out a way to harass their natural enemy, the ducks  start swimming close to the shore.

Too bad that they get so close they end up turning into dinner when another fox hiding in the grass  swiftly pounces on them with cutting edge precision.

Bruce Fogle, on page 84, in the book ‘The Dog’s Mind” also mentions about wolves possibly engaging in a similar behavior when hunting down rabbits. He talks about naturalists who mention wolves using frivolous play antics to intrigue rabbits to move towards them, thus, reducing their escape distance. Michael Fox, in the book “Dog Body, Dog Mind: Exploring Canine Consciousness and Total Well-Being,” says ethologists refer to the curious behavior as “fascination behavior.” 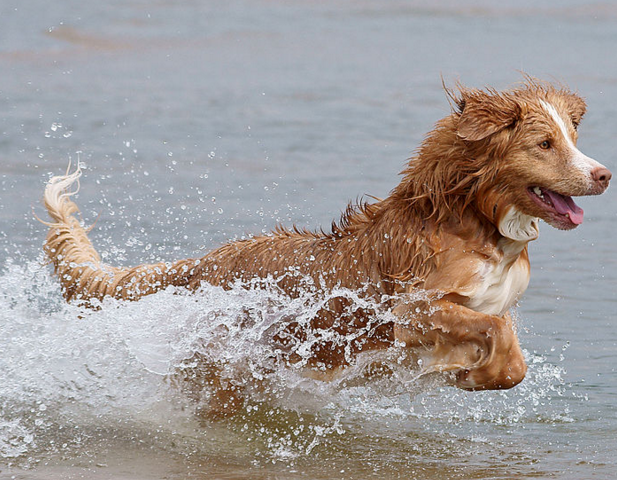 In a similar fashion, the Nova Scotia duck tolling retriever attracts ducks. There’s belief that hunters took advantage of the duck’s behavioral quirk to use dogs that resembled foxes to do the “shoreline dance.”

These dogs will prance along the shoreline with their flashy white markings, light feet, and upward tail-tip, appearing and then suddenly disappearing from the shore, until they grab the attention of a group of ducks who are rafting or flying at a distance.

The hunters, hiding in a concealed spot, may further encourage the dog to prance around by tossing him a ball or a stick along the shore.

Intrigued by the dog’s bizarre behaviors, the ducks will move closer, perhaps not as close to put themselves at risk from being grabbed by the dog, but at a close enough distance to be within the hunter’s shooting range. Once shot, the retriever will then gleefully complete his work by retrieving the fallen birds.

The Nova Scotia Duck Tolling Retriever was bred to “toll”, or lure, ducks into shooting range by causing a disturbance near the shore. After the duck is shot, the dog brings it to the hunter, by kallerna; Edited by jjron, CC BY-SA 3.0