Sibling rivalry isn’t limited to children, puppies can develop a form of sibling rivalry too. It often happens when dog owners adopt two littermate puppies or non-related puppies that are around the same age. To prevent sibling rivalry and its associated challenges, many reputable breeders will refuse to sell two sibling puppies at once. Backyard breeders and pet stores? They may care less, their main concern being that your check won’t bounce back so they can cash in double the profits. 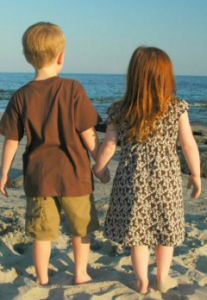 According to Kyla L Boyse, with the Department of Pediatrics & Communicable Diseases at University of Michigan Health System, in children sibling rivalry occurs as the siblings are competing on figuring out who they are as individuals and work on developing their own talents, interests and activities to show how they are different from each other. Competition over parent attention may also create conflict especially when the children feel like they’re getting unequal amounts of attention.

To address sibling rivalry in children, Kyla L. Boyse suggests ensuring that each child has enough time and space of their own and encouraging cooperation rather than competition. Paying attention to when the conflict occurs is also helpful as sometimes there’s a pattern. Siblings are often more likely to pick up fights when they  are hungry, bored or tired. 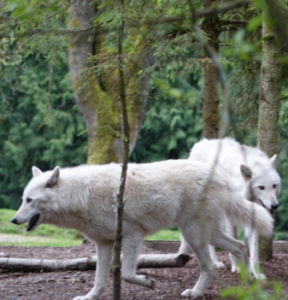 Among animals, it’s interesting to note that sibling rivalry isn’t unusual. It may be more pronounced though in certain species compared to others. In it most extreme form, it may lead to “siblicide,” where one sibling kills the other. This is sometimes observed in birds when resources are scarce. By killing the sibling, the surviving bird has eliminated competition thus upping the chances for survival. This survival mechanism could also offer an advantage for the parent which no longer has to waste time and energy on feeding offspring that would likely not survive anyway.

Siblicide is also seen in the spotted hyena. According to Frank J. Sulloway, an American psychologist, unlike other carnivores, hyena pups are born with a set of fully erupted teeth, which can result in the death of 25 percent of offspring by their siblings. On a lighter note, not all animal species are prone to such extreme forms of rivalry. In wolves, older siblings actually help out in rearing the youngsters. 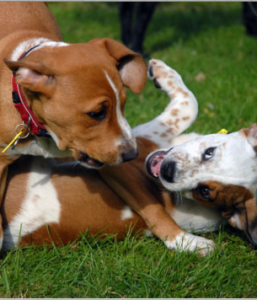 Among puppies, sibling rivalry is a fairly common occurrence in littermates. The most severe forms are usually seen among female littermates. It’s important to point out out that not all siblings develop sibling rivalry. There are several reports of dog owners raising two sibling puppies at once without any particular problems. However, this doesn’t necessarily mean everything is 100 percent fine. In some cases, the signs may be there but they may be subtle enough to be barely noticed. We often think of sibling rivalry as conflict over access to toys, attention, food, but there’s often more going on. Sibling puppies are prone to developing littermate syndrome which leads to further problems down the road. What are the signs of littermate syndrome in puppies? 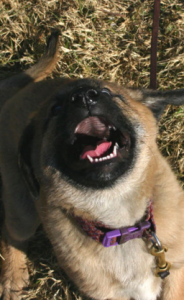 Generally, when two littermates are adopted, one puppy appears to be more confident while the other one is shy. However, this “confidence” may only be apparent when the puppy is in company of his sibling. Separate “Mr. Confidence” from his sibling and he may become insecure and shy. It’s not uncommon for littermate puppies to become so overly attached to each other that they become anxious when separated, even if they’re just parted for brief periods of time. This over-attachment may cause the puppies to fail to reach their full developmental potential leading them to become “half-pups.”

“Another common situation that is rather problematical is when two littermates are raised together. This sort of arrangement is rarely recommended, since very often one of the puppies seems to flourish while the sibling is overshadowed and fails to achieve its potential.” ~Steven R. Lindsay 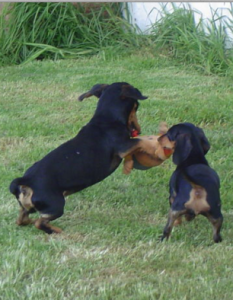 Puppies may not be able to focus on the owner when in company of each other. They are often distracted from each others’ presence. This strong bond among siblings may interfere with their ability to learn basic obedience skills as the owner is often left out of the equation. To further aggravate things, because the puppies have each other, owners may fail to provide adequate socialization which can lead to fearful behaviors towards strangers, other dogs and novel stimuli. To overcome these challenges, puppy owners should plan separate walks, separate training and socialization sessions and separate play sessions for significant portions of the day. As in dealing with sibling rivalry in children, providing individual attention is crucial. Sibling puppies should also sleep in different areas and not share the crate. Basically it boils down to having the pups spend the majority of their time with their owners rather than with each other.

“Functionally what I’ve seen is that the pups are simply harder to train. It’s just hard to get their attention. They are so busy playing with each other (or squabbling, more on that later), that you become the odd man out. I imagine that we humans become more like party poopers that interfere in their fun with their playmates” ~Patricia McConnell

Many people who get two litter mates may assume that getting two litter mates makes potty training easier. After all, all you need to do is take them out at the same time, right? Wrong. Last time we checked, littermates didn’t come with coordinated bladders and bowels. So don’t assume potty training will be a breeze, chances are high that you may take both puppies out, one may urinate, the other may defecate. Then once inside, the puppy that urinated defecates in the middle of the rug. As you clean up the mess, the puppy that defecated, urinates on the floor. You clean up that mess. Then, an hour later as you get a glass of water, you stumble on another mess, who did that? With two pups, you’ll have to increase supervision and keep an eagle eye on both pups which can become challenging at times. 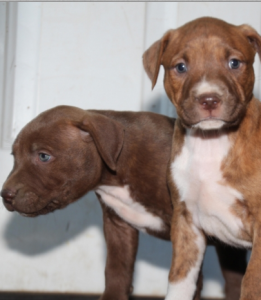 As mentioned, separating sibling pups to prevent excessive bonding is crucial. As an owner of  two (now fully grown) littermate puppies, I can attest how important this is. Fortunately, I was a very determined “stay at home” puppy raiser that was doing my very best to make things work out. While fortunately my pups didn’t show drastic effects of over bonding, I must confess that they were there, only the effects became visible when I had to separate the siblings for several months as I took one dog with me to continue my education out of state. During this trip, I noticed a gradual yet steady change in my dog. I must precise that my dog wasn’t a bad dog before by any means, but after leaving her brother behind, I noticed that she started getting more tuned in towards me and she even started relying on me more for play or simple companionship. I guess I got a taste of how it must have felt had she had been the only dog.

This to me is proof that just because sibling dogs are getting along well and they seem to be maturing just fine, doesn’t necessarily mean that they haven’t been affected by their bond. It may be that the effects of being littermates are just subtle or we have assumed them to be the “norm”   until that day we separate them and start noticing what they missed out. These ‘bonded pairs’ may simply not be as good as they might have been had they been on their own. But don’t just take my word for that, there are plenty of behavior professionals claiming how counterproductive it may be to let two pups bond excessively with each other. This is why dog behaviorists, trainers, breeders and shelters discourage getting two puppies at once.

There aren’t really any studies on sibling rivalry or littermate syndrome in puppies but there seems to be plenty of anecdotal evidence suggesting the negative effects. Potential guide dog puppies are typically raised by families who volunteer to socialize and train the puppies before they’re sent off to formal intensive training. Not all puppies make it though to graduate into a guide dog.  Clarence Pfaffenberger in the book “New Knowledge of Dog Behavior” discusses how raising two littermate siblings together may have an impact on their potential as guide dogs with one dog succeeding while the other becomes unsuitable for the task.

“In the case of two litter mates raised together, one becomes a successful candidate for Guide Dog work and one fails, even if their aptitude tests were equal. “- Clarence Pfaffenberger

As seen, raising two siblings can become problematic. The problems may be evident from the get-go or farther down the road when the pups become adolescents and no longer get along. Or as in my case, you may notice the subtle effects only once you separate the pups. This doesn’t mean though the task is impossible, I am the last person on earth to make recommendations having raised littermates myself, but I really think people should give it careful consideration before impulsively going the two-puppy route. Would I do it again? I’m not sure I would have the energy to repeat the experience!

Raising two puppies at once is sure not for everyone because it entails socializing the puppy, training the puppy, walking the puppy multiplied by two, making it double the workload or  even triple the workload as Kelly Dunbar states. People have a hard time enough with one puppy, that two may feel like an unsurmountable task. Unless the puppy owners have ample of time and experience and are are willing to work with a dog trainer, things can become difficult. If the goal is having two dogs, an easier option might be getting a second pup later on after the first one has received sufficient socialization and training and has developed a stable personality.

“Actually I always tell people they are tripling their workload because you have to do work with the dogs individually and together.” Kelly Dunbar