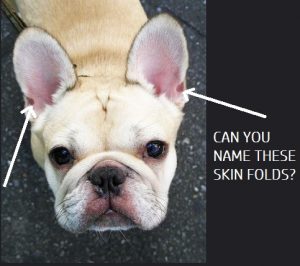 If you ever carefully looked at your dog’s ears you might have noticed a fold of skin on the outer side of his ears. Many dog owners wonder about this anatomical feature. “What’s the slit on the side of my dog’s ear? What’s that extra flap doing on the edge of my dog’s ear?” Does that pocket on the outer edge of a dog’s ears have any particular function? To get an idea of exactly what skin fold in a dogs’ ears we are talking about we have attached a picture on the left.

Interestingly this extra fold of skin has a name, so today’s trivia question is: What’s the name of that double flap of skin on the edge of a dog’s ear?

Also known as cutaneous marginal pouch, Henry’s Pocket is a fold of skin that forms an open pouch on the dog’s lower edge of the ear. This anatomical feature is particularly noticeable in cats, but it’s also quite visible in dogs especially those with little hair in their ears and dogs with erect ears.

As of today, the function of this pocket remains unknown (Kumar 2005). There are however some theories that it must have something to do with helping dogs detect sound. The outer portion of a dog’s ear that is visible is known as pinna and it’s made of skin and cartilage. The pinna works as a funnel that helps the dog gather sounds that are then funneled to the ear canal where it travels to the ear drum. While some sound waves enter the ear drum directly, some other sound waves may bounce off the ear flap causing a slight delay before they impinge upon the dog’s ear drum. Sound waves that reach the dog’s Henry Pocket, are further delayed considering that they tend to bounce around that area. What does this possibly mean? It could mean that those slits on the edge of dog’s ears may play a role in attenuating lower pitches while helping the dog detect high-pitched sounds. But again, this is just an assumption! Some people believe instead that the fold is there to help the dog flatten his ears to protect them. Until research is conducted, we can only make guesses.

A dog’s cutaneous marginal pouch is a preferred location for vets to use for skin biopsies of the ear when needed to diagnose conditions such as pemphigus foliaceus or small vessel vasculitis. Because the Henry’s Pocket is a preferred site for ear mites or ticks to hide, it’s an area vets often check often upon physical examination of the dog. Also, being that this area is dark and often moist, it can attract bacteria and fungal infections. Vets may therefore sometimes get a swab sample from this area so to evaluate it microscopically.