Let’s face it: dogs are quite talented when it comes to chaining one event with another. You place your hand on the handle that opens the wardrobe and your dog’s antennas are up, and next you know, he comes running to you as he already has guessed what your next move is. Yes, your dog has learned that most of the time when you open that wardrobe, you’re getting your jacket, and next, you’ll grab the leash and take your dog on a walk. And if you’re wondering, no, your dog is not telepathic, he’s just amazing in paying attention to what you do. Dogs with separation anxiety, know all the routine too well, they chain up all those different pre-departure cues such as brushing your hair, putting on your shoes and grabbing the car keys with you leaving the house. So since dogs are blessed with such an uncanny ability to chain one event with another why not put it to good work? 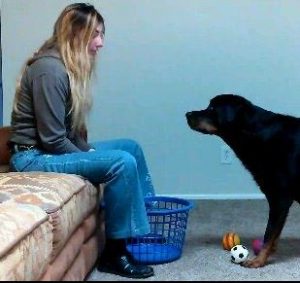 There are two ways dogs can be trained to chain behaviors: one of them is forward chaining and the other one is back chaining. In forward chaining, the dog learns to chain a series of behaviors starting from the first behavior first and then progressing towards the last in an orderly fashion.

Basically, the behaviors are taught in the exact order they are carried out once the training is complete. So if say, we wanted to train a dog to grab a toy and then place it in a basket, we would follow this sequence: 1) train the dog to go to the toy 2) train the dog to pick up the toy, 3) train the dog to carry the toy towards the box, and then, finally 3) drop the toy in the box. While this method can work well, dogs seem to be respond with less enthusiasm when compared to back chaining.

In back chaining, the dog is taught the last behavior of the chain first, then the behavior before that, moving in a backwards fashion. So back to training a dog to place a toy in a basket, one would therefore start by training the dog to drop the toy in the basket, and every time the toy is dropped in the basket, the dog is rewarded.

This is repeated several times so the action of dropping the toy in the basket has a strong history of reinforcement and the dog performs the behavior reliably. Then, the dog is trained to walk towards the basket and drop the toy in it and is rewarded, and so forth until the whole sequence is completed. 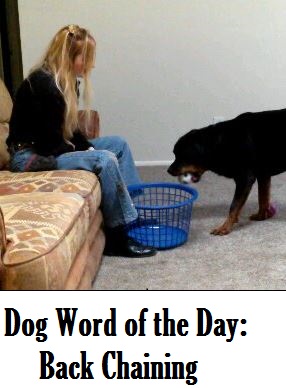 What’s the advantage of using back chaining to train dogs? There are several advantages. Firstly, it may feel less overwhelming for the dog learning the behavior in small steps as it’s easier to assimilate and these small incremental successes can help instill more confidence in the dog.

As the dog progresses through the steps, anticipation builds due to the eagerness to complete the final one for the well-deserved reward. Just like a child who visits grandma and eagerly eats the four-course meal just to eat the sundae with the cherry on top, the dog eagerly progresses through the whole sequence of behaviors.

Bach chaining therefore comes very useful when you are training your dog to perform a series of complex behaviors such as seen in the sport of  Canine Musical Freestyle, agility, trick training or as seen in the performance of  several service-dog related tasks.

Did you know? When using back chaining, since you are building on the final behavior of the chain, you don’t need to reward your dog for every single behavior you insert into the front end of the chain, just the final part. 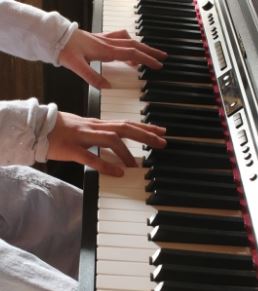 Back chaining works so well that many teachers apply it when teaching children how to pronounce polysyllabic words. For instance, to teach a child how to pronounce the word “hippopotamus” the teacher may start by pronouncing the last syllable, in this case “mus” allowing the child to repeat after her. Next, she would add the prior syllable and would therefore pronounce “a-mus” then, “pot-a-mus,” then “po-pot-a-mus” and then finally the whole word “hippopotamus.”

Even music teachers find it advantageous to use back chaining to teach their students how to put notes together and play a nice piano piece. They’ll therefore focus on teaching the last part first, then they’ll link the second to the last piece and so forth up until the whole piece is played. When the piece is finally played, the musician feels relief from ending the performance and his performance is often further reinforced by the teacher’s praise or people clapping their hands if playing in front of an audience. But there’s more to that from a chemical standpoint, according to the quote below.

“Recent research shows that there is a release of endorphins when the musician reaches the end of the piece… Endorphins are our “treats” at the end of our “tricks”.~Larry McDonald, guitar teacher

Things to be Aware of 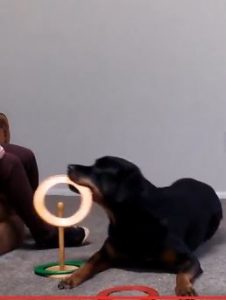 While quite effective, there are several things one should be aware of when using back chaining as a training method. For example, in long chains, the performance may become sloppy at times and the dog may start skipping some behaviors so to get to the final chain of  the behavior, the one that is strongly reinforced. What should one do with such a smarty pants dog?

Should this happen, it’s important to not reward as you don’t want to reinforce a sloppy performance that’s missing parts! So take a step back and recognize the “weakest link,” the behavior in the chain that your dog doesn’t perform too well. You can have the dog try again or you can otherwise take this behavior temporarily out of the chain and work on strengthening it separately. Once it’s fluent enough, you can then re-introduce it into the chain.

“The procedure of breaking a task into small steps to facilitate training is called task analysis. A task analysis identifies the stimulus and response for each step of the chain.”~Mary Burch, Jon Bailey