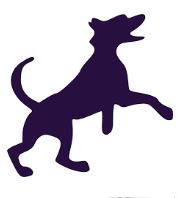 Among the world of dogs, there are a variety of colorful terms used and some dog breeds are known by their nicknames. Have you ever heard about a dog breed nicknamed the “Jumping Up and Down Dog?” This nickname is quite curious and it may bring mental images of dogs jumping up and down like kangaroos or some dog on a pogo stick. Here’s a little hint: as one may assume, it would take quite an agile type of body for a dog to jump up and down. So today’s dog trivia question is

What dog breed is nicknamed the “Jumping Up and Down Dog?”

The correct answer is D, the dog breed nicknamed the jumping up and down dog is the basenji. 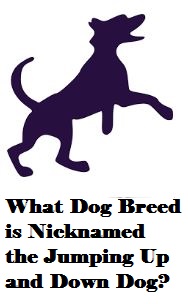 Perhaps most people know the basenji by his other more popular nicknames “the barkless dog” or “the soundless dog” which obviously refer to this breed’s tendency to yodel rather than bark, but the jumping up and down dog nickname merits some attention too.

Curiously, this nickname derives from this breed’s African name “m’bwa m’kube m’bwa wamwitu” (now try to pronounce that!) which translates to the “jumping up and down dog.”

Of course, the next question is “why are basenji known as the “jumping up and down dog” in the first place?” 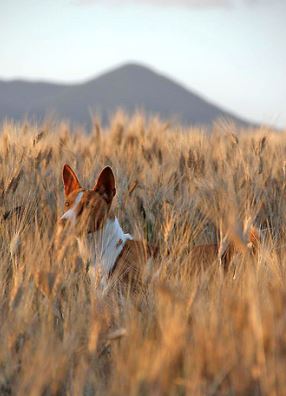 The basenji dog breed is quite an ancient breed originating from the Democratic Republic of the Congo in Africa. Basenjis have a history of being used as hunting dogs, chasing animals and flushing them into nets for their hunters. Basenji were also used to keep the rodent population under control.

Their nickname “the jumping up and down dog” derives from this dog breed’s tendency to leap high over the tall grasses of his native land  so to take a quick peek around, checking for prey while airborne. Many basenji owners also report seeing their dogs stand on their rear legs,in a meerkat-like manner when their dogs are curious about something.

” It is marvelous to see one jump up and down in five feet high elephant grass, he almost seems to hover in the air at the top of his jump whilst he has a quick look around and scents the air. Hence, one of the African names M’bwa M’kube M’bwawamwitu, the jumping up and down dog.” ~Basenji Club of Great Britain 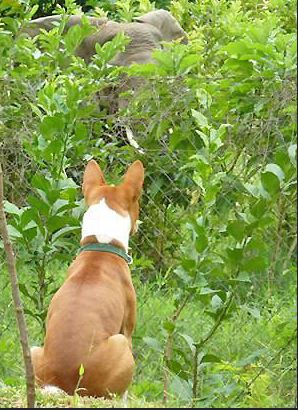 A Body Built for Hunting

If we looks closely at the basenji, we will see a dog breed that was purposely designed for hunting. Curiously, the American Kennel Club bred standard informs us that this breed hunts both through sight and scent.

The whole facial features of the basenji denote alertness. The basenji’s ears are erect, ready to capture the faintest sounds. Courtesy of this breed’s smooth musculature, basenji move in an effortless gait that is depicted as resembling a racehorse trotting.

Interestingly, basenji are known for lacking the typical doggy odor of many dogs, a trait that may have helped them go undetected by other animals when hunting. The fact that basenji are bark-less may stem from their primitive heritage as silent hunters. Barking was a trait that was selectively bred by humans so dogs could alert them about the presence of animals or intruders. A dog’s ancestors were quiet hunters.

Did you know? Because basenji are silent on the trail, Congolese natives have them wear a bell made of wood, or iron, or the shell of a Borassus nut so they are aware of their whereabouts. 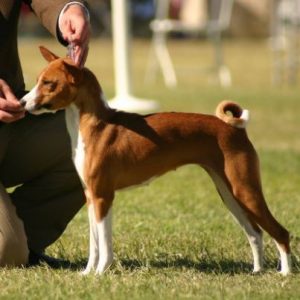 Not Everyon’es Cup of Tea

A dog that doesn’t bark but yodels, that’s virtually odor-less and that’s blessed with exotic looks, is sure to draw attention and many people may feel tempted to open their hearts and homes to a basenji, but they’re not everyone’s idea of the ideal dog.

Basenjis do cherish time with their families, but as a primitive breed with a history for hunting, they have characteristics that can make them not everyone’s cup of tea.

Basenji are very inquisitive, energetic, highly intelligent, independent and have a strong prey drive. They are escape artists who will do what it takes to get to the sight or scent of something that attracts them regardless if it means jumping over, crawling under or digging his way out. And when it comes to training, you really have to work on making it fun and worthy of his attention. Fail to do that and your basenji will walk away and look for something better to do.

Did you know? The Basenji Club of America offers a Basenji University guide for owners. The guide has interactive tests to help learn the basics about this breed.