The Disney cartoon The 101 Dalmatians and its subsequent movie seem to suggest that mother dogs remember their puppies and will do what it takes to be reunited with them, but is this only a Disneyland fantasy, or is there any truth to it? Can mother dogs recognize and remember their puppies even after they have been separated for some time? One may think they may not, as we are often reminded that dogs live in the moment, but fortunately, there are a few studies to give us an insight about long-term memory in dogs which takes us closer to the answer. 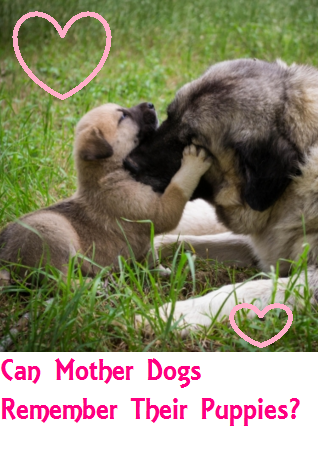 When puppies are born, mother and puppies strongly bond to each other courtesy of powerful hormones. Puppies, being born in a helpless state, totally depend on their mother during their first few weeks of life. Being separated at this time, causes great emotional distress in the young puppies causing sustained vocalizations and attempts to being reunited with the mother and siblings.

Most likely these responses are triggered by an evolutionary adaptation considering the many dangers associated with a vulnerable puppy being left alone, explains Steven Lindsay in the book “Handbook of Applied Dog Behavior and Training, Vol. 2: Etiology and Assessment of Behavior Problems.” The distress vocalizations emitted by the pups along with mother dog’s behavior in attempting to reunite with them therefore increases the chances for survival. It’s therefore expected that some level of lasting mutual attachment and attraction must develop between the vulnerable pups and their mothers, adds Lindsay.

After the their first weeks of life, pups start becoming gradually more and more independent. The puppies can soon eliminate on their own, start exploring their surroundings and start looking for alternate sources of food other than mother’s milk. Soon, the pups stay more and more away from their mothers and this is a good time for them to go to their new homes, but does this mean they will be completely forgotten? Peter G. Hepper may have the answer we are looking for.  His study conducted back in 1994 revealed that at 4 to 5.5 weeks of age, puppies were able to recognize their mother and mothers could recognize their siblings and that olfactory cues were sufficient for this recognition to take place.

With this information in mind, the study went on to separate mom and pups and reunite them years later. Once the pups reached 2 years of age, (after being separated from their mother at 8 to 12 weeks) the pups and mom were therefore reunited and their behaviors were observed. Mother dogs showed signs of recognizing their now adult puppies and the adult puppies showed signs of recognizing mom. This shows that dogs are therefore capable of recognizing their kin even after 2 years of continuous separation!

Watch This Heartwarming Video of Mother Dog Being Reunited with Her Pups!

While Hepper’s study was quite intriguing, William Carr and his colleagues at Beaver College decided to expand on Hepper’s study and this time they focused on seeing how siblings reacted after even longer separations from their mothers. In this study, mother dogs and their offspring were separated for several years and the puppies were observed to see how they reacted to their mother’s scent. The study revealed that the pups spent more time reacting to their mother’s scent than to the scent of another unfamiliar, like-breed dog, suggesting that dogs are capable of scent-mediated kin recognition even after many years of separation.

If you feel put aside as a human care giver (after all, aren’t we like our dog’s surrogate moms and dads? Research seems to suggest that) don’t feel bad: consider that the same study also found that the pups spent more time sniffing the scent of their initial caregiver than to that of a like-sex stranger after many months of separation. There is possibly even the chance that the dog could remember the caregiver’s scent even as long as 10 year after separation (Appel, 1999). These findings therefore seem to suggest that dogs seem capable of retaining olfactory memory and social recognition for their lifetimes. The familiar scent may perhaps not always be very missed, but for sure it’s not forgotten!
Soldier and Dog Reunion

Did you know? Charles Darwin owned a dog who was known for not being fond of strangers. After being away for 5 years, Darwin was impressed as to how upon being reunited he didn’t growl at him much when he called him.  According to Darwin this was proof of a dog’s complex cognitive abilities.