It’s not a common sight, but when you see a dog bunny hopping you may be wondering what may cause such an unusual gait. Just for clarification, a dog who is bunny hopping is picking up his back legs at the same time, a movement that reminds us of how rabbits hop. It’s often seen in young dogs, but sometimes can be seen in older ones too. Because there are some medical conditions that may cause a dog to run this way, it’s always a good idea to stop by the vet for an assessment just to play it safe before assuming it’s just a cute quirk that will possibly go away as the puppy matures.

Sometimes, you may stumble on videos of dogs happily hopping through a tall field of grass almost as if they were the canine personification of a kangaroo. In this case, the dogs look like they may be pouncing, a hunting strategy used by predators to hunt down some small critter, perhaps a rodent. The pouncing may help the dog flush the critter out from its hiding spot so it can be caught. Some dogs will also instinctively do the bouncing/hopping behavior when a ball ends up being tossed in tall grass. It’s sure a fun behavior to watch! See the video below for a fun video of a dog hopping and pouncing through tall grass. 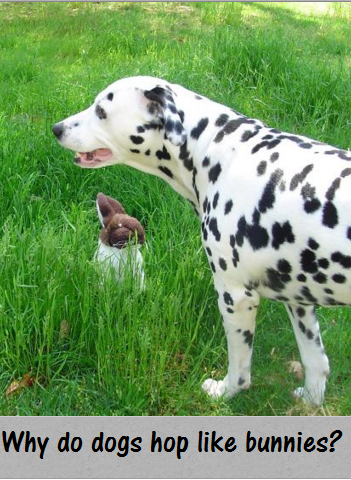 A Case of Puppy Zoomies

In some cases, hopping like a bunny is simply a sign of a puppy who is playing and acting excited. Many dog owners report that their puppies bunny hop when they are happy and have a bout of zoomies. These puppies are simply having lots of fun and will run like rabbits arching their backs and tucking their rear legs under as they speed as fast as lightening. Even when getting x-rays done, many owners of puppies and young dogs claim that their vets found to nothing medically wrong with their dogs’ joints.

“I wouldn’t say that bunny hopping would make me concerned,” says veterinarian Dr. Marie on her Ask a Vet Question website. However, if there are signs of pain such as limping or whining when walking or jumping then the situation may be more concerning, she remarks.

“Bunny hopping is a descriptive term that is often at least part of a normal gait in many dogs, often young ones.” Dr. Peter Bennett 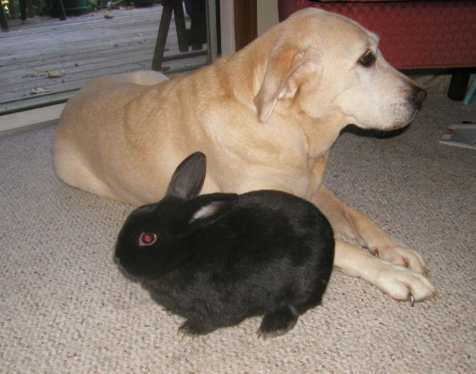 There is a reason why young dogs are often the ones seen bunny hopping: they are in the a transitional period of their development. As the dog is rapidly growing and adapting to his body, the developmental process can be awkward, explains veterinarian Eric Barchas.

The good news is the puppy goofiness and lack of coordination stage is often short-lived and the young dog may outgrow the bunny hopping as he matures. Generally, bunny hopping is only seen occasionally when the puppy plays, but if it seems to be persistent or  if the puppy appears stiff, it’s always a good idea to check with a vet. Determining if the pup is just going through normal development or the bunny hopping may be an early sign of something else can be tricky. “This can be a difficult call in the large and giant breed pups because they are usually so gangly and awkward at this stage anyway” says Dr. Melj, a graduate of the University of MN College of Vet Med.

An orthopedic problem that could cause a bunny hop gait in dogs when running or climbing stairs, is hip dysplasia. Hip dysplasia is a condition that is most commonly seen in larger dog breeds and occurs when the dog has a loose-fitting hip joint that leads to abnormal wear and tear, eventually causing arthritis with its associated (and much dreaded) inflammation and pain. The condition arises from the abnormal development of the puppy’s hip joint. Genetics are often the main factor to blame, but environmental factors may also play a role. Dogs who are affected by forms of moderate to severe hip dysplasia may show signs as early as 4 months of age.

“Clinical signs of hip dysplasia can be seen as early as 4 months of age, however, many dogs are 8 to 12 months of age. Bunny hopping, stiffness on rising after a rest, lameness on a limb, and atrophy of the muscles of the hind limbs are typical clinical signs.” ~Dr. Daniel A. Degner, Board-certified Veterinary Surgeon.

While large dogs are more prone to get hip dysplasia, small dogs are more prone to a medical condition known as luxating patella. In this case, what happens is that the knee cap (patella) pops out of its groove. Affected dogs may be seen bunny hopping or running on three legs, sometimes shifting the back legs, explains veterinarian Dr. Gary.  Also known as luxated knee cap, floating kneecap or trick knee, this condition is graded into 4 degrees of severity ranging from a stifle joint that appears almost normal to a disabling degree where the patella is dislocated all of the time and requires surgical correction.

“An owner typically notices a little skip or ‘bunny hop’ in their dog’s step. The dog may even run on three legs, holding one hind leg up, and then miraculously be back on four legs as if nothing has happened. “ Adobe Veterinary Center

What can cause a bunny hop in a dog who has had x-rays and no signs of hip problems were found? Something to consider is that x-rays can be subjective, points out veterinarian Dr. Andy, a UC Davis graduate. A veterinarian specializing in radiology can sometimes find things on x-rays that a general practitioner may miss. Other possible causes for bunny hopping other than hip dysplasia or floating knees may include growing pains, a tear of a dog’s cruciate ligament (more limping though than bunny hopping in this case), or a soft tissue injury. In some cases, vets may prescribe a trial of non steroidal anti-inflammatory drugs to determine if there may be some form of inflammatory process going on.  Other possible causes for bunny hopping in dogs also may include disorders of the nervous system. According to the Merck Veterinary Manual, bunny hopping may be a sign of spinal dysraphism causing neurological symptoms by 4 to 6 weeks of age or protozoal polyradiculoneuritis causing bunny hopping by 3 to 8 weeks of age. As seen, bunny hopping can have many causes, and a stop by the vet is warranted for a diagnosis or to simply rule them out.

Disclaimer: this article is not meant to be used as substitute for professional veterinary advice. If your dog or puppy is bunny hopping, please see your vet for proper diagnosis and treatment.