Watching dogs interact can provide a lot of insights into the different ways dogs communicate, and among the variety of behavioral displays, a dog standing over another dog can be one of those behaviors that has many people wondering what it means. Is the behavior of a dog standing over other dogs a sign of trouble and therefore one of those behaviors that require intervention? Is it play? As always, when it comes to dog behavior there are no rules written in stone as there are so many variables. Let’s take a closer look into the behavior and see what the experts in the field say.

What exactly is a dog who is standing over other dogs doing? Many dog owners describe it as a dog who places himself perpendicular to another dog in what is often referred to as a “T posture.”

Along with positioning himself perpendicularly at a 90 degree angle in respect to the other dog, the dog may also attempt to place a paw on the shoulder of the other dog, or perhaps rest his head or chin on the other dog (chin-over).

You can sometimes see these fellows literally standing on tiptoe when they do this as if trying to seem taller and imposing. Some dogs will stand over other dogs that are lying down with their neck arched over them.

“The perpendicular or T posture is where one dog stands with his or her head or neck over another dog.”~Karen Overall 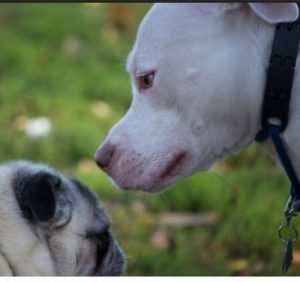 What Does it Mean?

Veterinary behaviorist Karen Overall in the book “Manual of Clinical Behavioral Medicine for Dogs and Cats” defines the perpendicular T posture assumed by a dog interacting with another dog as an interaction that is involving social challenge. When a dog postures in this way, he gets in the other dog’s way and limits the other dog’s room for maneuver. Dr. Overall lists the “T posture” as  an agonistic behavior that is likely to have an aggressive component.

What exactly are agonistic behaviors? According to Roger Abrantes, agonistic behaviors include all forms of intraspecific behavior (within a species) related to aggression, fear, threat, fight or flight. Behaviors that yes, are functionally related with aggressive behavior, but that yet fall outside its narrow definition.”

On a lighter note, sometimes standing over may be just part of a dog’s way to attempt to control a situation, perhaps because of an underlying sense of insecurity. This posture is sometimes seen in adult dogs dealing with hyper pups as a way of trying to gain control of the pup’s rambunctious behavior.

This type of posturing  can also be part of a dog’s play behavior repertoire and can even be seen in young puppies. According to Overall, standing over with the head arched is a behavior that can be seen among litter mates considering that learning the ABC’s of agonistic behavior is a normal part of puppy development.

“Standing over another dog who is lying down… This is a blatant way of saying “I am bigger, taller and in charge.” Adult dogs often stand directly over puppies to make it clear that they are still controlling any interactions with them.”~Stanley Coren

Is it Dominant or Aggressive Behavior? 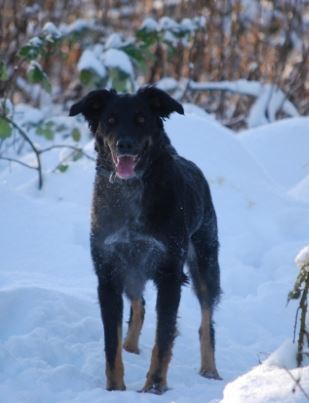 Is standing over in dogs a sign of dominance? Is the dog standing over the other dog dominant? Many people wonder about this and sometimes heated discussions arise around the usage of the term “dominance.”

Dominance is not a personality trait, reminds us Sophia Yin. It’s a relationship between animals so to determine who has priority access to resources such as food, sleeping areas and mates (Bernstein 1981; Drews 1993).

Social hierarchies do exist among domesticated dogs  (after all, even humans live in a hierarchical world, think president, vice-president etc.) but among dogs, the structure tends to be fluid. A dog may therefore show more “assertive”  behaviors in one encounter with a dog and act more “deferent” in the next, depending on what’s at stake, explains Pat Miller.

The term dominance should therefore not be used lightly. According to  Karen Overall “It would be inappropriate to assume that agonistic behavior alone defines a dominant-subordinate relationship or a pack relationship. Terminology affiliated with packs, pack behavior and rules about social organization within packs is unduly simplistic and should not be used uncritically.” It would be incorrect therefore to imply that a behavior such as standing over means that the dog doing it is “dominant” and the dog being subjected to it is ‘subordinate.”

Is standing over aggressive behavior? When it comes to agonistic behaviors, there may be components of outright aggression, but there also may be certain signals and displays which are meant to avoid aggression from happening in the first place. Unless there are actual injuries occurring, more likely there are ritualistic displays at play rather than overt aggressive ones. In other words, don’t be so fast in placing labels on dog behaviors! Notice how Roger Abrantes in the quote below is careful not to say “dominant dog” or “aggressive dog”, but rather  mentions “dominant behavior” and aggressive behavior to prevent labeling/ascribing personality traits.

A direct face-to-face meeting of two dogs who do not know each other can trigger conflict at times. It’s important to learn the signs of trouble before things escalate. A safe distance often can provide a better outcome. Dogs should be prevented from rehearsing “standing over behaviors” which can turn problematic and risk becoming overtime default behaviors used in all encounters with other dogs. In the video below you can see an interaction that involves “standing over” and how things escalate from there. What precipitated the “snark?”Did the leash exacerbate things? Or did the brown dog make a move that was just too much to tolerate? In other words, could this have been avoided? As always, readers are free to share thoughts in the comment section.

Disclaimer: this article is not meant to be used as a substitute for professional behavioral advice. If your dog is manifesting concerning behaviors towards other dogs, please consult with a behavior professional.