Just like humans, dogs have a pineal gland, a small gland that not many people may be aware of, but that carries many important functions. Also known as pineal body, conarium or epiphysis cerebri, the pineal gland is present in almost all animals and it plays an important role in their lives. Getting to know the pineal gland better can help us better understand how much dogs rely on this small brain structure, however, this gland’s secretory activity is still only partially understood. So let’s discover today what we currently know about a dog’s pineal gland by listening to his story! 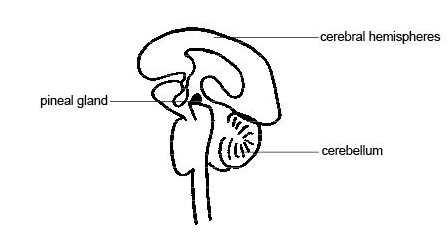 Hello, it’s your dog’s pineal gland talking! There are chances you have never heard about me before and that’s OK, I am not too popular, but hopefully today you’ll become more familiar with me and my importance. I am quite tiny, just imagine that in humans I am roughly 1 cm in length, whereas in dogs I measure just about 1 mm long. Since I am tucked  at the base of your dog’s brain just outside of the blood brain barrier, it’s not like I am advertised much. You may perhaps stumble on pictures of me in some anatomy or veterinary textbooks but otherwise, I sort of live in the shadow.

If you look at the meaning of my name, you’ll find that the word “pineal” comes from the Latin word pīnea ‎ meaning pine cone. I am called this way because some people think that I am shaped like a small cute pine cone. The fact that I am a gland means that I secrete hormones that are meant to be sent into your dog’s bloodstream. Indeed,  along with other important glands like the thyroid gland and the pituitary gland, I am part of your dog’s endocrine system. Not too long ago, people thought I was pretty useless and were fast to categorize me as some vestigial structure, reminiscent of an evolutionary past, but there’s a renewed interest in me, which is very good news for me, you and your dog!

I am a the Hormone of Darkness 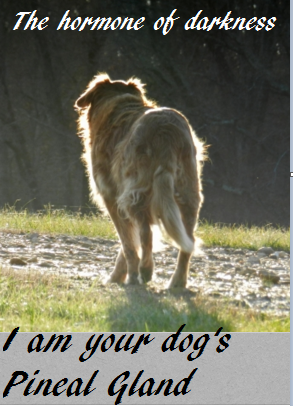 I am a gland responsible for providing information about the amount of sunlight  received during the day and therefore play a role in those wake and sleep cycles, also known as “circadian rhythms.” I basically tell bears when it’s time to hibernate and it’s likely my fault if people feel like crawling into bed early during those long, wintry days making them feel lethargic and depressed! You see, when you and your dog sleep, I produce what is known as melatonin, a hormone that provides information about the daily onset of darkness and that’s responsible for regulating the sleep cycle. My production of this hormone is maximized during a good night of sleep in a quiet, completely dark room. On top of that, melatonin offers even more benefits: it can support a good immune function in your dog and protect his cells from the damage of free radicals.

“Melatonin is involved in the circadian rhythm and acts as a free-radical scavenger.” ~ Dr. Megan Whelan

Did you know? On top of helping regulate sleep, melatonin is also known for having anticancer effects, explain Dr. Demian Dressler, and Dr. Susan Ettinger on the Dog Cancer Blog. 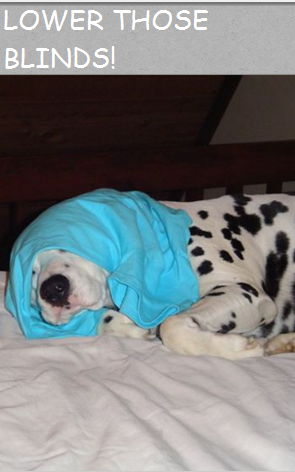 When I produce melatonin in normal quantities, your dog is happy and healthy. As the photosensitive ganglion cells  in your dog’s eyes detect light, this information is sent to the suprachiasmatic nucleus, a small region of the brain in the hypothalamus that communicates with me. When it’s daytime, I inhibit my production of melatonin so you can carry on with your daily tasks without getting too groggy, but when nighttime falls, my production of melatonin goes in high gear so I can make you and your dog ready for bed time (as long as you have kept your dog busy during the day!) Problems start though when for one reason or another, I stop producing adequate amounts of melatonin as needed. This can wreck havoc on your dog’s body causing disruptions to your dog’s “internal clock.”

Studies in humans say that a common reason for me slowing down is aging.  According to Colorado State University, as I age, I tend to develop calcium deposits (brain sand) which is common in older animals. Due to the aging factor, older dogs suffer from disruption in their sleep and wake cycles, which explains why they’re often pacing restlessly at night. According to veterinarian Dr. Nicholas Dodman, melatonin can be given under the guidance of a vet to dogs with sleeping disorders or elderly dogs suffering from cognitive dysfunction triggering disrupted sleep (sundowner syndrome.)

Other than helping in sleep timing,  I am also responsible for several other biological effects that vary with the seasons  such as reproduction, behavior, coat growth and those changes in coat colors seen in animals that camouflage. Some dogs are prone to light-responsive alopecia, which means they tend to lose hair when I don’t get enough sun exposure as it may happen in certain areas with long, dark winters.

“Light responsive alopecia is logically more common in those areas of the country with dark winters such as the Midwest, the Plains states, parts of New England and Canada.” ~ Dr. Alice M. Jeromin, veterinary dermatologist.

Did you know? The pineal gland is sometimes referred to as the ‘third eye” because it responds to light and day length.

As seen, I am quite an important gland! Luckily, unlike some other glands, I am not a frequent site for tumors. The National Canine Cancer Foundation mentions that pineal tumors are extremely rare in dogs.  I hope this article has helped you understand me better! Send pats to your dog!