Did you know? Dogs have a special gland on their tail known as the supracaudal gland. No, we’re not talking about  those glands around the dog’s bum slightly under the dog’s tail, but actually a totally different gland that’s found instead dorsally, on the upper surface of the dog’s tail. Also, known as the tail gland or violet gland, this gland isn’t unique to dogs but can also be found in several other animals such as foxes, wolves, some European badgers and even the domestic cat.

Function of the Gland 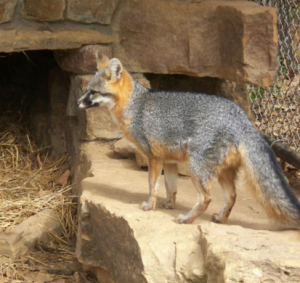 The supracaudal gland in dogs is a secretion gland, meaning that it secretes certain substances. The area is rich with apocrine and sebaceous glands. In dogs, the tail gland is not as developed as in foxes, who use it for communication purposes and which secretes a strong odor for the purpose of scent marking.

According to Richard Estes, author of the book “The Behavior Guide to African Mammals: Including Hoofed Mammals, Carnivores,” the violet gland in foxes is more developed in females and secretes more actively during the denning season.

As the female goes in and out of the den to attend to her pups, she presumably leaves her scent from her tail when it’s brushed against the entrance of the den. In dogs, the exact function of this gland remains unknown but it appears that it may help identify them to other canines, explains veterinarian Mary Fuller.

Location of the Gland

In dogs, the tail gland is an oval area located just above the dog’s 9th caudal vertebrae. That’s about 5 to 40 mm from the base of the tail. In some dogs, the gland is vestigial, meaning that it has lost its function or it’s entirely absent. According to Fox, 1971; Clutton-Brock, 1995, tail glands may be absent in dogs, or if they are present, they’re reduced. The presence of tail gland in dogs is connected with coarse, stiff hairs, and, despite being often called “stud tail,” it can be found in both male and female dogs.

At times, the dog’s supracaudal tail gland may get infected. Stud tail, also known as tail gland hyperplasia or supracaudal gland infection, is caused by the inflammation or infection of this gland and it’s often found in intact male dogs as there’s belief it’s testosterone induced.

The gland in this case may swell, and there may be hair loss causing a bald, greasy spot at the top area of the tail. In severe cases, affected dogs may require a course of antibiotics, but for mild cases, a topical, medicated shampoo may help out.

In some dogs, tumors may also develop in this site. If your dog appears to have symptoms of stud tail, please see your vet for proper diagnosis and treatment. However, when the quantity of terpenes produced are quite large, the odor may be rather unpleasant.