Many people are intimidated by neuroscience because they believe it is something really complicated, but it all sums up to making it easy to understand. Today, we will be taking a close look to a dog’s neurons, how they work and the many tasks they accomplish. Turns out dogs and people share similar nervous systems, so by learning more about neurons, we also learn a bit more about ourselves and how our nervous system functions. So let’s see what a dog’s neurons have to say, how they work and how they help us accomplish the many things we do in life. 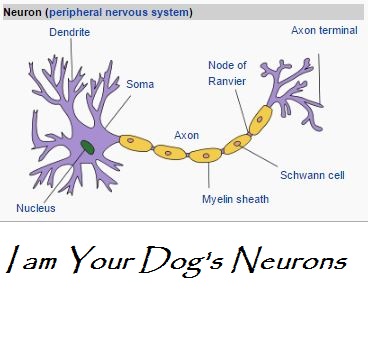 Hello, it’s your dogs’ neurons talking! While your dog’s body is made of many cells, cells that are part of the nervous system are known as “neurons” so to distinguish us from the average cells. We are the longest cells of the body, sometimes reaching great lengths (like when going from the spinal cord all the way to your dog’s skin or lower leg).

Like other cells, we are surrounded by a cell membrane, we have a nucleus, cytoplasm, mitochondria and other organelles. What mostly distinguishes us from other cells though is what we do. There are different types of us: Sensory neurons responsible for your dog’s senses such as touch, sound and scent, motor neurons specialized for muscle contractions and movement and interneurons specialize in connecting  neurons with other neurons sharing the same region of the brain or spinal cord. 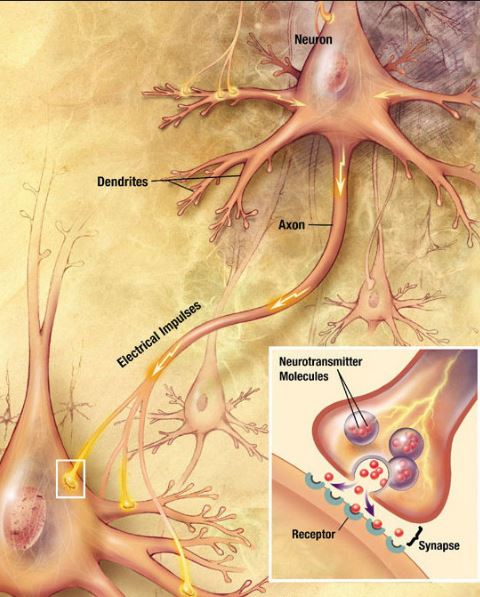 We are responsible for carrying messages. We are electrically excitable, and we use this electrical energy to receive and transmit information. We have dendrites and axons to help carry out the task. Imagine your dog’s brain as a telephone switch-board receiving and delivering messages. Our dendrites are on the receiving end and take incoming calls (mostly local calls), while our axons take care of the outgoing calls, including the long distance ones. Like telephone poles, electricity travels on wires from one pole to another until it reaches its destination. The gaps between one pole and another can be compared to the gaps known as a ‘synapses.’ In the same fashion a telephone switchboard allows a big number of callers to talk to one another simultaneously, a neuron is able to communicate with other neurons courtesy of these synapses. Instead of telephone numbers though, us neurons rely on chemicals known as neurotransmitters to ensure that all messages reach their destination.

What messages do we relay? Well, just think that just now, as you are reading this sentence, your brain and nervous system is working. As you are reading, nerve cells in your eyes are relaying the information from your eyes to the brain. While dogs don’t read, they perform many other actions. Everything a dog sees, hears or touches, turns into electrical signals moving between the brain and body. For instance, when your dog is stepping on a thorn, a message is sent from his paw to his brain. Thanks to us neurons, your dog will sense pain and will lift his foot off the ground before he risks getting it injured any further. And we do work fast! Just think that the message reaches his brain within a few thousandths of a second! It is ultimately thanks to messages traveling from one neuron to the next that your dog can move his muscles, joints and other body parts.

Did you know? There are chances that dogs may be also gifted with “mirror neurons” special neurons capable of “firing in patterns that mimic others’ actions,” explains Adám Miklósi, a leading expert on canine behavior. 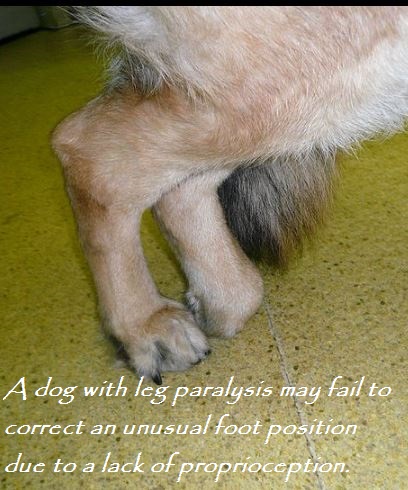 While we are known for doing amazing work, sometimes if the incoming or outgoing calls are plugged wrongly or there are problems with the switchboard, there will be chaos and problems in our ability to communicate. When dogs develop health problems, it’s important to verify whether the problem is local or whether it may derive from a breakdown in our communication.

For example, the lower motor neurons are found by the spinal cord and innervate directly into the dog’s skeletal muscles. These neurons are known for innervating the dog’s front and back legs. When vets examine a dog’s legs, they may want to rule out any problems with our communications. During their neurological examination vets will therefore look for signs such as absence of a reflex, weakness (paresis) or paralysis (plegia) which denote some of spinal injury interfering with our communication. In the picture on the left, a neurologic deficit related to the spinal cord, causes this dog to fail to detect that the paw is not positioned correctly. In a dog with a healthy nervous system instead, he will quickly correct it. Unfortunately because we are such specialized cells, some of us cannot divide and create new cells as other cells do. As a result, it’s more challenging to recover from a brain or spinal cord injury compared to other injuries.

As seen, we do a whole lot! Actually, your life and your dog’s life depend on us. It is thanks to us that your dog feels emotions and sensations. It is thanks to us that your dog makes decisions. You must basically thank us for every action your dog makes, whether, mental or physical, conscious or reflexive. We are the working unit or your dog’s brain designed to relay information to other nerve cells, muscle, or gland cells. So every time your dog moves, reacts or thinks, give us a though and thank us for existing!

Did you know? According to Live Science,  cats’ brains account for about 0.9 percent of their body mass, while dogs’ brains make up 1.2 percent. According to scientists though, a bigger brain doesn’t necessarily mean smarter; rather, the number of neurons may be more accurate. Considering that cats have 300 million neurons while dogs have 160 million, this may suggests cats are smarter than dogs, but dog lovers hold your horses: There are yet not enough studies on feline smarts to prove that.