Yes, for those who were wondering, dogs have sinuses too and this means they are also prone to developing their own sets of sinus problems. Sinus problems in dogs are perhaps not as common as in humans, but they sure seem to cause the same annoying problems as in humans. Just make sure to consult with your vet if your dog seems to have problems with his sinuses, and never try to give any over-the-counter products meant for humans as they can be potentially toxic! So today, let’s get more acquainted with a dog’s sinuses, where they are located, what they do, and signs of trouble when things go wrong. 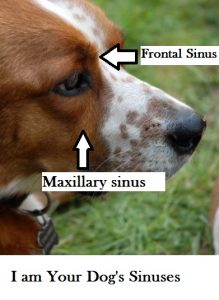 Hello, it’s your dog’s sinuses talking! Yup, we are those hollow air spaces found within the bones of your dog’s skull. There are several of us and we are named after the skull bones that house us. Many people may assume we are located in the dog’s nose but actually we are located elsewhere. The two of us located in the front part of your dog’s head are known as frontal sinuses while the two of us located nearby your dog’s upper jaw are known as maxillary sinuses.  The numbers don’t seem to add up? Well, consider that humans have extra sinuses, the ethmoid sinuses and the sphenoid sinuses.

We are coated with a layer of mucus and have little hairs called cilia which are meant to trap and push bacteria and pollutants out of the way through a small drainage hole. By draining things that shouldn’t be there, we are basically protecting your dog’s lungs from bacteria, viruses, and foreign particles in the air. 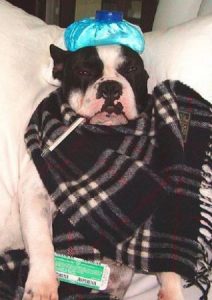 As in people, we can sometimes get infected and this can be due to viruses, bacteria and fungi. Not to mention that dust, smoke or pollen may also cause us to get inflamed, making us more susceptible to infection. Sometimes we may get infected from secondary problems such as the presence of an abscessed carnassial tooth root. These secondary infections are though more commonly seen in older dogs. Basically, what happens is bacteria from the mouth creeps up all the way to us through a bad tooth. X-rays can provide a good picture of what may be going on.  Extraction of the tooth therefore would help stop this infection.

“The 4th Upper Premolar Tooth, is the largest in the dog’s mouth. It is also called the carnassial tooth. It is a massive three-rooted tooth with long roots that is used by the dog to shear and crack. The roots are so long that they reach into the maxillary sinuses upon which the abscess later forms. ~Dr. Ron Hines

What signs does a sinus infection in dogs cause? Since we get inflamed and congested with fluid, affected dogs may be sneezing, coughing and gagging to get these fluids out. The eyes and nose may be watery, and in severe cases, affected dogs may lose their appetite and even become lethargic. The discharge may be clear as often seen in allergies, but may thicken when we are infected. A culture of the dog’s nasal discharge can provide an insight as to whether viruses or bacteria are affecting us. There may also be sometimes blood from the nose, but this needs to be promptly checked out as this can a sign of cancer in elderly dogs.

It’s important to avoid trying to use over the counter medications for sinus infections as dogs have a different metabolism and certain ingredients may be potentially toxic. For example, decongestants containing pseudoephedrine or phenylephrine, commonly found in cold, flu and allergy medications such as Claritin-D or Mucinex-D can cause vomiting, dilated pupils, high blood pressure, abnormal heart rhythms, tremors, seizures and even death, warns the Pet Poison Helpline. So if your dog shows signs of problems with us, please see your vet for proper diagnosis and treatment!

I hope this has helped you understand us better. As seen we are quite important in keeping Rover healthy and happy! So keep an eye on us for signs of trouble and report to your vet any unusual findings as soon as you can. Your dog will thank you for that! Best regards,

Disclaimer: this article is not to be used as a substitute for professional veterinary advice. If your dog is showing signs of problems with his sinuses, please see your vet for proper diagnosis and treatment.