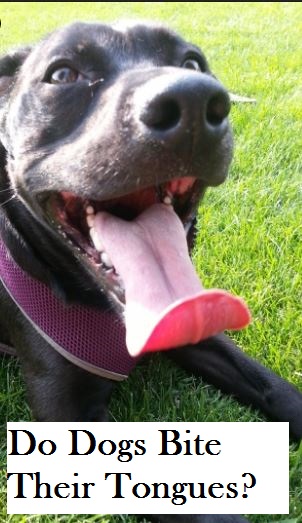 A dog’s tongue is often hanging out and it almost always seems to have a nice reservoir of steady saliva ready to greet human friends, but dog tongues are prone to being bitten too. Sure, this doesn’t happen too often fortunately, but when it does, it can be a scary event for those watching. With a dog’s sharp teeth, biting the tongue can do quite some damage, but luckily Mother Nature has provided dogs with ways to prevent this from happening–at least, not too often. Chewing requires a well-orchestrated interaction between the tongue and jaw and a precise mechanism that prevents dogs from biting their tongues. Without such a mechanism, dogs would end up chewing more tongue than kibble. Not a great evolutionary advantage for sure!

“Dogs do occasionally bite their tongues. Fortunately, they don’t seem to chomp down too hard, or they might end up tongue-less. They seem to bite them less often than people bite their own tongues, perhaps because with constantly hanging it out of their mouths, they naturally have a mechanism that automatically pulls it from the path of their own teeth.”~D. Caroline Coile, Margaret H. Bonham 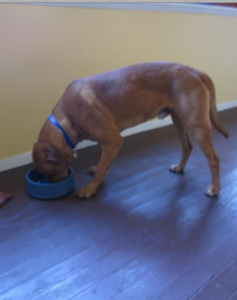 In humans, biting the tongue is often a “side effect” of civilization. Eating fast, eating while talking or just  eating while being distracted from other people, the quintessential iPhone or the TV, is often what causes us to bite our tongues. The pain when we bite our tongue seems to tell us that we should pay more attention in the future to what we chew on! But what about dogs? Some dog seem like they’re biting their tongues while eating. You may hear these dogs whining briefly almost as if  saying “ouch!”

While dogs don’t have work schedules or talk with others while enjoying their meals, dogs are fast eaters by nature and therefore this can perhaps make them prone to biting their tongues at times, but if this happens often, it may be a sign of localized swelling,  presence of a mass or even a dental malocclusion causing teeth to snag on the tongue. So if your dog whines while eating, see your vet,  it may also be possible he might not be biting his tongue, but is actually suffering from a mouth or dental problem. 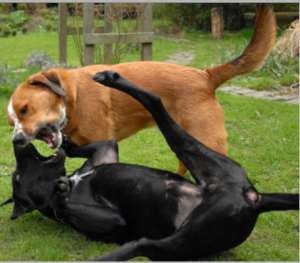 When dog play vigorously, accidents can happen. In dogs, biting the tongue while playing is not that uncommon and it makes sense considering that that tongue is often out and “in the way” when a dog romps around a lot such as during vigorous play. It can happen in particular when dogs are fetching items with their mouths or when they trying to catch things such as a tug toy or a flirt pole and miss, with the end result of “ouch!”biting their tongues.

Seizures cause involuntary spasmodic movements and dogs affected are often seen violently paddling their feet, twitching their muscles, chewing and foaming at the mouth. Contrary to popular belief, dogs do not swallow their tongues during a seizure, but they can manage to bite it. Trying to move the tongue out of the way  may seem like a good solution but this practice is not recommended as the dog’s uncontrollable chewing movements may cause an accidental bite, warns Dr. Etienne Cote in the book “Clinical Veterinary Advisor: Dogs and Cats.” 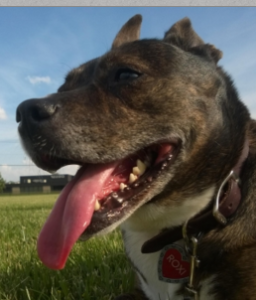 Let’s face it: the tongue is in a vulnerable position being in the middle of a dog’s sharp teeth, but evolution has considered keeping that tongue out of harm’s way from all the friction going on when dogs, people and other animals chew their foods. We might not know yet exactly what mechanism prevents dogs from biting their tongues on a constant basis, but in mice, a study has shown that special premotor neurons, responsible for controlling jaw and tongue muscles, play a role in preventing the mouth from closing unless the tongue is simultaneously retracted.

Luckily, tongue injuries heal very well because the tongue has excellent vascular supply, explain Dale Kressin and Steve Honzelka, two board-certified veterinarians specializing in animal dentistry. Here’s a hint: look under your tongue using a mirror and you’ll see how rich in vascular supply it is. However, the fact that the tongue has a lot of vascular supply also means that, when injured, it tends to produce copious amounts of blood which can be scary to dog owners to witness. According to veterinarian Dr. Kara McCarthy though, it’s unlikely for a dog to bleed to death from biting his tongue.

In the event of an injury derived from a dog biting his tongue, it’s best to keep the dog calm as, the more the excitement, the higher the blood pressure and the more the bleeding. Generally, bleeding from tongue lacerations starts slowing down after 5 to 10 minutes. Applying a bit of pressure to the area, if the dog allows it (don’t do this of course if your dog resents having his mouth handled), may help form a clot. Ice on the area or offering a bowl of ice water can help constrict the blood and help clotting, suggests Dr. Christian.  If the bleeding persists though, a vet visit is in order, possibly to have the tongue injury cauterized. At times, dogs may also need stitches if the cut is long or deep. Generally, minor laceration tend to heal in 7 to 10 days. Feeding moistened food, canned food or gruel that is easy to lap up while the tongue heals, may be helpful.

Disclaimer: this article is not meant to be used as a substitute for veterinary advice. If your dog has injured his tongue, please see the vet.