We are used to seeing our dogs sniff with their powerful noses, but did you know that dogs have different sniffing styles when it comes to putting their powerful sniffers to work? In the dog world there is sniffing and sniffing, meaning that dogs resort to different sniffing styles to learn more about the world surrounding them. The dog’s ability to detect the direction of a track was of vital importance back in the olden times when they were hunting for prey or scavenging. Today, dogs are much cherished for their tracking, trailing, air scenting and scent discrimination abilities which are all helpful sniffing methods employed in several fields. So today, let’s discover more about these different sniffing styles in dogs. 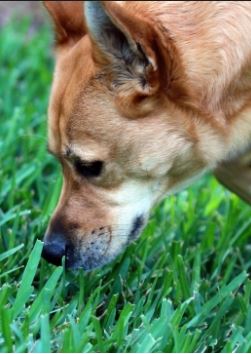 In tracking, the dog lowers his nose and carries it close to the ground most of the time so to track any scents left behind from other animals or people. Many dogs are nowadays employed to detect the scent of mechanical environmental disturbance and broken vegetation caused by footsteps.

What smells are tracking dogs exactly following? It appears that crushed vegetation and disturbed ground tends to give off a different odor that dogs readily detect.

Since the dog is following the scent trail left by a human, it’s important that the dog stays always “on track.” When being trained or tested, tracking dogs are therefore penalized or even disqualified should they be straying too much from the track, explains Kat Albrecht, in the book “Dog Detectives.”

Considering that ground scenting dogs focus on foot steps and the effect of the weight of the person causing ground disturbances and crushed grass, this style of sniffing works best if the trail is still relatively fresh.

Fun dog nose fact: when a dog is calm and breathing normally, he breathes in an out about 15 to 30 times a minute. When he’s actively sniffing though, he inhales and exhales anywhere between 140 and 200 times a minute! 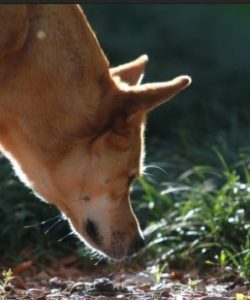 Trailing is often confused with tracking; however, the difference appears to be  what exactly is being tracked. While in tracking the dog mainly focuses on following foot steps by detecting the scent of broken vegetation, in trailing, dogs focus on detecting flakes fallen off the surface of the skin.

It is estimated that a human loses about 40,000 skin cells per minute, explains  Vivane Theby, a veterinary specialist for canine behavior and author of the book “Smellorama: Nose Games for Dogs.“Since these flakes are prone to drifting with the wind, dogs may not follow the exact path the person being followed used but may be just about several yards away.

Also, when the the sun is shining, warm air rises, and along with it, scent particles rise too so that the dog no longer needs to bring his nose to the ground. Both tracking and trailing dogs are often kept on a long line to prevent them from wandering away or outrunning their handlers in their eagerness to follow scent.

“Trailing is the most common way that dogs follow scent paths, by scenting the flakes of scurf shed by the body rather than the foot steps themselves.”~ Stanley Coren

“Tracking vs. Trailing — What’s the Difference? Tracking dogs follow footprints, whereas trailing dogs follow the scent wherever it has drifted, regardless of where the feet are placed (or not).~Jen Bidner

Did you know? After following a trail for some time, the dog’s sensory cells may “adapt” and cause what’s known as “nose fatigue.” By lifting the head from the ground for a bit or leaving the area, the dog may “reset his sense of smell” so that he can start from fresh again. When given a “fresh start,”  scent dogs may be better able to pinpoint scents. (K9 Scent Training p. 77) 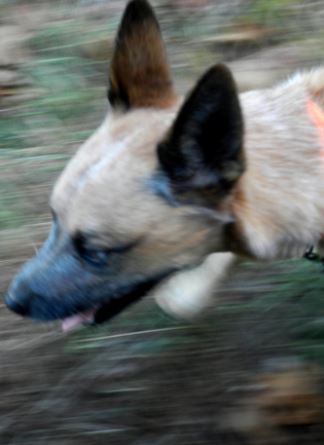 In air scenting, dogs are running with their heads kept up high in a straight line as they are going after scent molecules wafting in the air. This sniffing method is mostly used in disaster areas such as collapsed buildings.

Air-scenting dogs are also often used as avalanche dogs since they must focus on catching airborne scent from possible trapped victims rather than following a specific track. These dogs aren’t usually looking for a particular person, they’ll just follow any human scent which is why they work best for disaster areas.

Dogs often utilized for air scenting include German shepherds and Labrador retrievers. Generally, air scenting dogs will zig-zag back and forth and work without harness. These dogs may alert about their discoveries by performing a behavior such as barking or sitting.

Did you know? When dogs are air scenting, they perform one long inhalation lasting about 20 times longer than a normal breath and then exhale through the mouth. This allows the odor molecules to better reach the scent receptors in the dog’s olfactory epithelium, explain Dr. Resi Gerritsen and Ruud Haak in the book “K9 Scent Training.”

Watch this dog air scenting with nose up and running in circles to get the scent back. 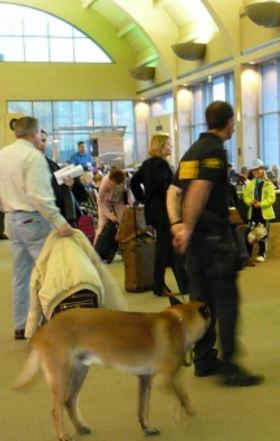 In some lines of work, a dog’s ability to discriminate scents is fundamental for accomplishing certain tasks. These dogs must therefore specialize on focusing exclusively on a particular scent while ignoring others.

For instance, truffle dogs must learn from a young age to discriminate between the scent of truffles and other odors and same goes with dogs used to detect explosives or drugs at airports. Search and rescue dogs can also be asked to take things one step further by discriminating a particular human odor.

By letting these dogs sniff a particular scent article (a piece of clothing or an object touched by the missing person), these dogs attain an “odor image” and start the trail searching for that particular scent. Bloodhounds excel in this as they are capable of remembering the scent for longer periods of time, without the need for being repeatedly reminded of it.

Did you know? Interestingly, dogs can be trained to combine sniffing styles so that they can overcome obstacles. For instance, a tracking dog may lose track of a person if the person crosses a stream as they are no more foot steps to follow, but at those times they can rely on their ability to detect airborne scent.