A dog’s endocrine system is composed by several glands that are meant to produce hormones which are then transmitted through the bloodstream where they have several effects on the dog’s body and mind. The hormone testosterone, in particular, is secreted by the male dog’s testes and is known for producing several physiological and behavioral effects. So today let’s discover more about the effects testosterone has on dog behavior, and surprisingly, on female dogs as well!

Testosterone Starts in the Womb… 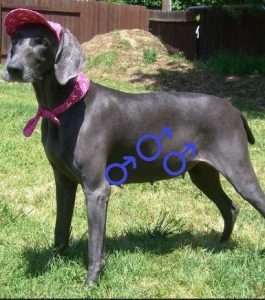 Testosterone generally flows at a pretty steady pace during an intact (not neutered) male dog’s life, but there are two specific times during a dog’s lifetime during which this hormone significantly impacts the dog’s brain. The first time likely takes place very early in development, when the puppy is still in the womb.

During this time, testosterone is spread from the amniotic membrane and through the blood flowing from the uterus until it reaches the pup’s brain. Once in the dog’s brain, it’s as if testosterone turns on an imaginary switch that prompts the brain to undergo anatomical changes and turns on the “masculine”  button.

Also, it appears that the hormone creates a predisposition for hard-wired behaviors in male dogs that may remain dormant until the next testosterone surge switches on later in life.

“In the uterus, testosterone can diffuse through the amniotic membrane and through uterine blood flow. Once it reaches the male dog’s brain, it brings about gender-specific structural changes that then relate to later development of sex-typical behaviors… These changes masculinize the male brain structure.” James O’ Heare

And May Affect Female Dogs Too! 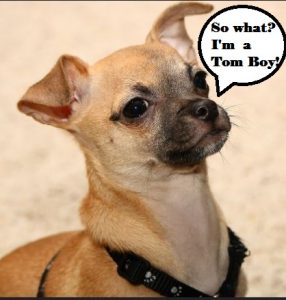 Wait, what does testosterone have to do with female dogs? Isn’t testosterone exclusively a male dog hormone? While testosterone is associated with maleness and typical male dogs behaviors, there are chances it may affect female dogs too. How is that? Well, here’s an insight into what may be happening

The phenomenon is known as androgenization, and it takes place in the uterus (yup in the womb). What’s likely to trigger this is a matter of the position of female dogs in the mother dog’s womb. If a female dog happens to be positioned between two males, there are chances her brain may be influenced (masculinized) courtesy of the diffusion of testosterone through the amniotic membrane, explains James O’Heare in the book “Aggressive Behavior in Dogs: A Comprehensive Technical Manual for Professionals.”

“Strong experimental evidence suggests that female embryos situated between males in the uterus are more likely to develop male-like aggressive tendencies and scent-marking patterns than are counterparts otherwise situated. Some suggestive evidence regarding the effects of perinatal androgenization of female dogs has been reported by Coppola. ~Steven Lindsay

But it’s During Puberty That Dogs Get the Big Surge. 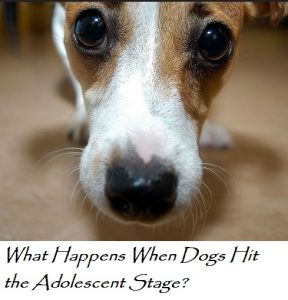 Back to male dogs, the second surge of testosterone occurs when the male dog reaches puberty. According to a study by Pathirana IN et al 2012, the levels of testosterone in dogs starts to rise in dogs just prior to puberty, around the ages of 4 to 6 months old, and then reaches a surge once the dog reaches puberty, generally when the dog is an adolescent between 6 and 12 months. Afterwards, testosterone levels maintain a state of little or no change, generally from when the dog is one to five years old and then those levels starts declining when the dog becomes senior.

During the puberty surge in testosterone, there is often an increase in sexually dimorphic behaviors, basically behaviors that are mostly seen in male dogs. This is often when owners of intact dogs start noticing behaviors such as roaming in search of a mate, lifting the leg to urine mark, mounting, and competition with other male dogs. These behaviors are often what causes dog owners to consider neutering their dogs. 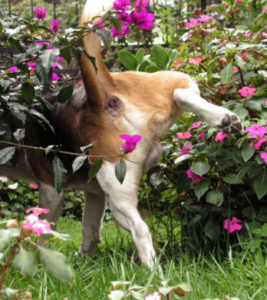 But there Are Chances Neutering May Reduce Them.

When a male dog is neutered (castration) the removal of a dog’s testes causes the production of testosterone to come to a halt. With testosterone levels reduced, there is often a marked decrease in behaviors driven by hormones such as urine marking, roaming in search of a mate and competition with other male dogs.

For those looking for statistics, a study has found that after neutering, roaming behavior decreased 90 percent, aggression between male dogs decreased 62 percent, urine marking decreased 50 percent and mounting decreased 80 percent.

However, there’s not much good news for dog owners expecting to see their male dogs calm down and settle after castration. That’s likely never going to happen any time soon because excitability and unruly behaviors are seldom driven by testosterone, explains Mat Ward, a Certificated Clinical Animal Behaviorist. On top of that, owners must consider that, despite the statistics appearing promising, neutering does not necessarily have total control over stopping sexually dimorphic behaviors.

But a New Study Says Neutering Won’t Likely Do Much to Stop Aggression. 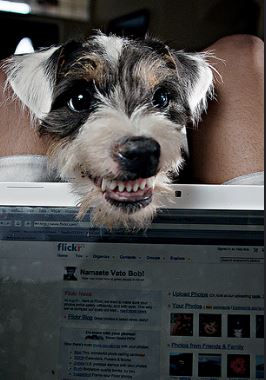 Many people consider neutering their dogs because they feel that testosterone plays a role in aggression, but how true is that? For many years, and in many cases  still as of today, the advice to neuter a dog is given out by dog trainers and veterinarians when presented with an intact male dog showing signs of aggressive behavior.

Neutering therefore has been commonly recommended throughout the years and has been a strong selling point to solve aggression problems, but it’s not that easy to justify the common notion that neutering is a cure-all. So does neutering stop dog aggression?

Karen Overall in her book  Clinical behavioral medicine for small animals, talks about testosterone acting as a behavior modulator causing intact dogs to react more quickly, more intensely and for a longer period of time compared to neutered dogs. However, she also warns that when it comes to aggression, neutering a dog may lower the tendency to exhibit aggression towards other dogs (which can be hormonally driven); but there’s not enough data to show the effects neutering may have on other specific types of aggressive behaviors.

Indeed, in most cases, neutering won’t fix dog behavior problems such as territorial or fear-induced aggression,resource guarding or food aggression. This is likely because there are several other factors at play other than hormones when dogs behave aggressively such as the impact of the environment in which the dog is raised, the dog’s genetic makeup, the dog’s history, and so forth. However, it’s also true that testosterone has been known to affect anxiety behaviors; for instance, among humans men who fail to produce enough testosterone tend to be more likely to suffer from anxiety and depression and testosterone treatments tend to alleviate these.

Interestingly, for those looking for data, a study using a large sample of dogs conducted by Parvene Farhoody and M. Christine Zink, found strong correlations between neutering and aggression, with neutered dogs exhibiting high levels of fear, anxiety and excitability, regardless of when the dog was neutered. And this is quite impressive data, especially considering the increase in aggressive behaviors seen in the past years in our companion dogs and considering the fact that a large percentage of aggressive behavior in dogs stems from fear, which coincidentally correlates with the modern trend of neutering dogs.

” Our data showed that the behavior of neutered dogs was significantly different from that of intact dogs in ways that contradict the prevailing view. Among the findings, neutered dogs were more aggressive, fearful, excitable, and less trainable than intact dogs. “~Parvene Farhoody & M. Christine Zink