The sensation of thirst is what makes dogs crave water, and just as it happens with us, it’s natural for a dog to feel thirsty after being out in hot weather or after exercising. Thirst is what tells dogs that it’s time to replenish his liquid supply. It’s sort of like that “check fluids” light that starts blinking when it’s time to bring your car in for service. Whether your dog drinks from a fresh mountain spring or a bowl of water, the sensation of quenching that thirst certainly makes him feel better. Keep an eye on that water bowl though, at times, excessive thirst can be a sign of a medical problem. 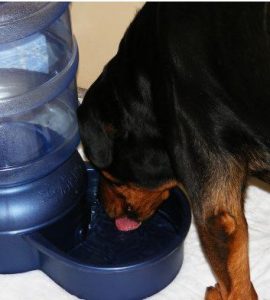 Dogs Have a Thirst Center…

What causes dogs to be thirsty? A dog’s thirst center is activated when the body detects a need for more fluids. Thirst can be caused by a loss of blood volume, known as hypovolemia or by a change in the normal levels of sodium and water in the blood. The dog’s thirst center is located in the brain, and the hypothalamus is ultimately the responsible party for triggering thirst. The hypothalamus is equipped with special sensors that are constantly monitoring the blood’s concentration of sodium and the blood’s overall volume and pressure. When the sensors detect low blood volume as seen from excessive bleeding or when it detects high blood concentrations of sodium, that’s when the dog’s hypothalamus springs into action and sends out a strong message: “Hey Rover, go drink something now!”

“The thirst center is stimulated by an increase in plasma osmolality (sodium concentration) and/or a decrease in blood volume (hypovolemia) resulting in an increase in water consumption.”~David S. Bruyette, DVM, DACVIM

And it Can Take a Conservatory Approach

When the dog’s body recognizes lowered fluid levels, it not only increases thirst, but also takes important measures to protect the dog from fast dehydration. The hypothalamus will therefore take a further step to prevent this by soliciting the posterior pituitary gland to secrete an antidiuretic hormone (ADH) also known as arginine vasopressin, which travels to the dog’s kidneys telling them to concentrate the urine and reduce urine volume. The goal is therefore conserving water, at least until the fluids are replenished. How’s that for a lesson on water conservation?

Did you know? The urine specific gravity test is meant to evaluate how concentrated a dog’s urine is and can help the vet determine how well a dog’s kidneys are working. 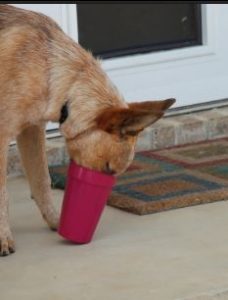 Some Dogs Have too Little

When a dog isn’t hydrated well, he’s known for being dehydrated. Dehydration in dogs can occur in two specific circumstances: reduced water intake or increased loss of fluids as seen from excessive vomiting and diarrhea. There are several ways you can tell whether a dog is dehydrated. A dehydrated dog will act lethargic, lose appetite, have sunken eyes and a dry mouth. A dehydrated dog’s skin will also lose elasticity and therefore if you pull the skin over the back or neck, it will fail to spring back into position quickly, or worse, it may stay lifted. Capillary refill time will also increase in dehydrated dogs.

Curious fact: Interestingly, yet rare, some dogs may have a malfunction in their thirst center of his brain. According to Prospect Park Animal Clinic, this means that, in plain English, the affected dogs’  “I’m thirsty trigger” doesn’t work as it should and therefore these dogs don’t feel the urge to drink.

And Some Dogs Have Too Much 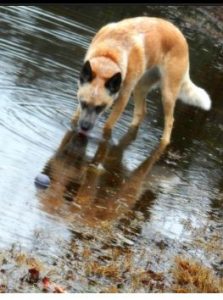 On the other end of the spectrum are dogs who drink too much. The medical term for excessive drinking is “polydipsia.” According to Dr. David Bruyette,  a board-certified veterinarian specializing in internal medicine, water consumption exceeding 100 ml/kg is considered abnormal. There are several conditions that can cause increased drinking in dogs, and along with that, increase urination (what comes in, must go out after all!).

According to the late and dearly missed veterinarian Dr. Sophia Yin, some of these diseases could range from a brain tumor that affects the dog’s thirst center of the brain to more common issues such as kidney or liver disease, adrenal gland disease or diabetes. 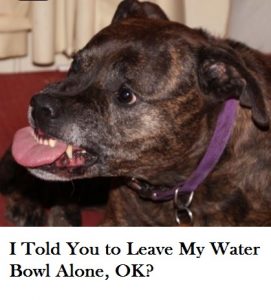 And a Few Dogs May Even Guard it!

Most people are accustomed to dogs who guard their toys, food, bones and resting spots, but not many people are familiar with dogs who feel compelled to guarding the water bowl. There’s a good reason though why they do so, explains veterinary behaviorist Karen Overall, in the book “Manual of Clinical Behavioral Medicine for Dogs and Cats.”Water is one of those things a dog may struggle with a human or other dog over access to it. Add on top of that, the fact that some dogs who had a hard start in life may have had limited access to water and experienced pronounced thirst, and there you go,  you have the perfect recipe for a dog who compelled to guard the water bowl.