“Let sleeping dogs lie,” says the famous adage, and those are surely words of wisdom when dogs hit the pillow. As in all living creatures, sleeping is important in dogs, and while dogs don’t have tight work schedules as people do, they still benefit from getting all the sleep they can get. Along with quantity of sleep, the quality of sleep is also something that’s important. In a previous article we looked at different dog sleeping position meanings, today instead we’ll be taking a peek at fascinating facts about dog sleep that dogs would like you to know. 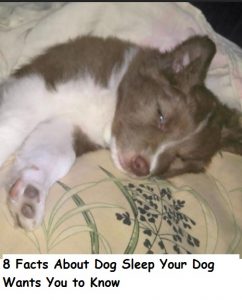 1) We Love to Sleep in Human Beds…

Pets also seem to have their favorite resting spots, with 52 percent sleeping at the foot of the bed, 23 percent snuggling right next to their owners, 14 percent sleeping under the covers and 11 percent sharing a pillow. This news is really nothing new, a while back the American Animal Hospital Association (AAHA) had found that 60 percent of cats and dogs slept in the owner’s bed or in their bedroom.

Some people may frown upon people who share their beds with their pooches, but for those who do sleep with their furry friends, here’s a great incentive to keep doing that. According to a survey conducted by the Center for Sleep Medicine at the Mayo Clinic in Arizona, pet owners who sleep with their dogs and cats may actually be getting better ZZZs. Despite what sleep experts have said for years, it was found that only 20 percent of owners found their pets to be disruptive; whereas, 41 percent felt that their pets were unobtrusive and even beneficial for their sleep. Perhaps it’s time for doctors dealing with sleep disorders to consider having more people share their sleep environment with a furry friend.

3) We Go Through REM Sleep Too… 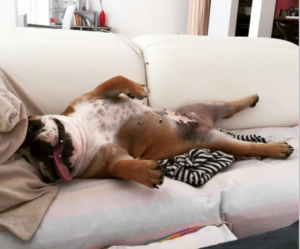 Just like people, dogs go through various different stages of sleep. The first stage of sleep mainly comprises low frequency electrical activity, and as such, it’s know as slow wave sleep. After a while, the dog then enters the rapid eye movement stage (REM), which, as the name implies, is characterized by rapid eye movements and much more than that.

During the REM stage (as dog owners can attest) dogs are often seen breathing faster, moving their legs, twitching their ears, chewing and even barking in their sleep! It all makes sense though when we think that the REM stage is when animals and people are dreaming. Have fun dreaming about eating that sandwich left unattended on the table and chasing rabbits Buster!

4) But Doggy REM can Sometimes get Out of Hand

In some dogs, movement carried out during REM sleep may be excessive and sometimes may even appear violent. There are reports of dogs exhibiting excessive running movements of the limbs, dogs attacking inanimate objects and some even propelling themselves across the floor. While these movements may appear similar to seizures, affected dogs can be awaken and show no coordination problems or confusion which is in contrast with what happens during a seizure, explains board-certified veterinarian Dr. Linda Shell. There’s a chance that dogs may be prone to developing a sleep disorder that has observed in people and that goes by the name of REM behavior disorder. 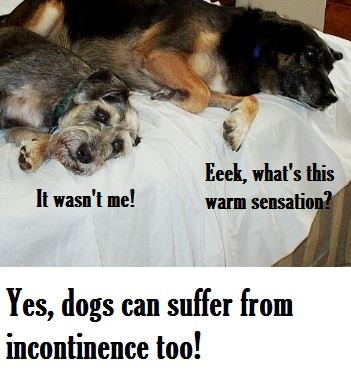 In humans, wetting the bed is associated with young children, but in dogs it’s mostly a matter of aging and it seems to affect mostly female spayed dogs. It’s called “Primary sphincter mechanism incompetence“(PSMI) also known as hormone-responsive urinary incontinence”or “estrogen-responsive incontinence” or more simply “spay incontinence. “A study,  found that about 1 out of 5 female dogs affected by this condition get it after they are spayed.

Here’s what basically happens. Strong sphincter muscles help keep good tone and prevent urine from escaping, but as spayed dogs age, these muscles tend to weaken causing leakage of urine when they’re resting or sleeping, explains veterinarian Dr. Marie. While senior spayed females dogs are mostly affected, this condition can also affect younger dogs (and occasionally males too). Fortunately, this type of incontinence can be  remedied with prescription veterinary drug known as phenylpropanolamine (yeah, try to pronounce that! )

6) And Get Disrupted Sleep Too.

Aging is sure no fun, and as dogs live longer lives, dog owners witness more and more problems related to old age such as arthritis, incontinence and canine cognitive dysfunction, the canine version of Alzheimer’s disease. Affected dogs show several signs along with disrupted sleep-wake cycles, which means that instead of resting peacefully, they’ll spend their nights pacing and vocalizing. A particularly distressing aspect of this whole ordeal is the fact that dog owners have a difficult time finding a way to comfort their dogs when they are affected by this condition, explains veterinary behaviorist Dr.  Karen Overall.

7) Stress Affects Us as Well.. 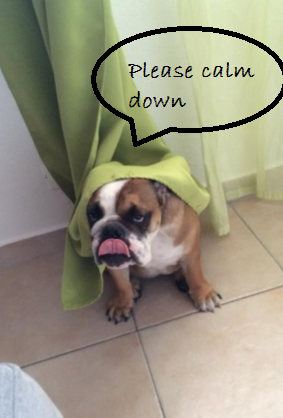 People are often tossing and turning at night when they are stressed by a multitude of problems, but stress can affect a dog’s sleep too. Sure, dogs don’t have to worry about balancing their checkbooks or filing for divorces, but they are sure prone to stress such as from loud noises, exposure to other animals and side effects of harsh, aversion-based training techniques (which should never be used! read ASVAB’S position statement) While some dogs are plain old lazy (think greyhounds and English bulldogs), consider that dogs who seem to sleep a whole lot may be stressed.

“Stressed dogs usually will not experience a satisfying sleep which is why they are always trying to sleep.”~James O’ Heare 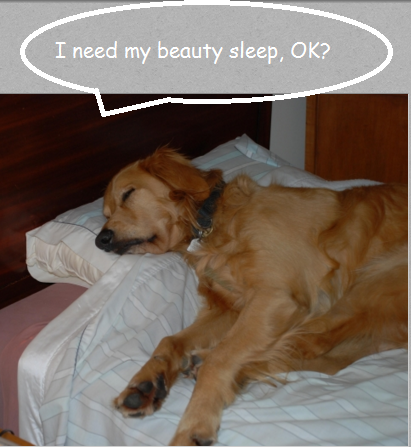 So yes, dogs needs their daily amounts of beauty sleep too and if dogs are stressed, it’s paramount to work on reducing their stress levels. Dogs denied adequate levels of stress often pay the consequences under the form of behavioral problems and and impaired learning abilities, explains veterinarian Dr. H. Ellen Whiteley in the book “Understanding and Training Your Dog Or Puppy.”  Want a dog who likes to hit the snooze button? Perhaps try going with one of those giant dog breeds.

You may also like: How much do dogs sleep on average? and Do Dogs Sleep With Their Eyes Open?