When it comes to training dogs, there are several different types of methods and techniques, but training methods focusing on confrontational, punishment-based techniques are known to cause unnecessary stress and fear in dogs. One method that has been promulgated by television shows and books is scruff shaking, basically grabbing the puppy or dog by the scruff and shaking when he is misbehaving.  The practice of scruff shaking dogs has been around for many years and has often been portrayed as species typical behavior, meaning that it’s based on what dogs do to other dogs. Turns out though that studies prove otherwise. 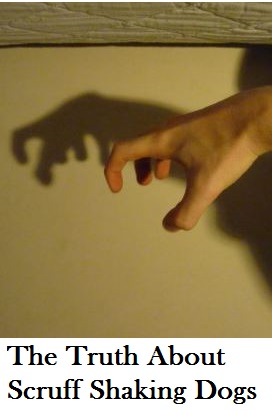 Scruff shaking is based on the belief that mother dogs correct their  puppies by biting and shaking them by the scruff of the neck. There is also belief that dogs use scruff shakes with other dogs. As mentioned, several television shows and some books have promulgated a dangerous “scruff shaking trend” in the past years suggesting it as a way for humans to correct undesirable behavior in dogs. By shaking the puppy or dog’s scruff, or poking fingers into the puppy’s neck, it has been suggested that dog owners can emulate the scruff shaking carried out by mother dog or applied among dogs.

“That’s what the (mother dog) does to discipline them.” I sometimes wonder if the people who propose these strange and barbaric practices have ever seen a dog before.  (Mother dogs) do not discipline puppies by scruffing them.”~ David Ryan PG Dip (CABC) CCAB 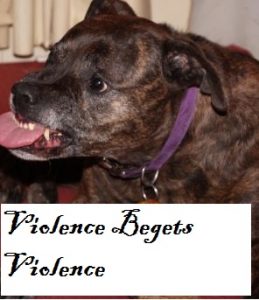 Scruff shaking along with alpha rolls and other punishment-based, physical approaches not only negatively affect the dog and owner bond, but also heighten the chances for defensive aggression.

The owner’s hands soon become a threat rather than a source of rewards, and dogs may  learn to respond to any hand movement towards them with defensive behaviors such as growling, snapping and even biting.

According to a study conducted by Meghan Herron, DVM, DACVB, Frances Shofer, DVM and Ilana Reisner, DVM, DACVB, of the Matthew Ryan Veterinary Hospital of the University of Pennsylvania, it was found that when dog owners resorted to harsh confrontational techniques, dogs responded with aggression.

More precisely, just to get an idea: 43 percent of dogs responded with aggression when being hit or kicked, 39 percent reacted to an alpha roll, 38 percent responded aggressively to having an owner grab their mouth and take out an object forcefully and 26% percent responded defensively when given a scruff shake.

” Punishment is like carpet bombing. The behavior you wanted to target gets hit but so can a huge portion of the dog‘s whole repertoire.”~ Jean Donaldson

In dogs, shaking by the neck is part of the predatory sequence meant to kill prey. It would be very counterproductive for a normal mother dog to do that. Mother dogs may carry their pups in their mouths to move them from one location to another and when they do so, they are very gentle.

The belief that scruff shaking is a species typical behavior carried out by mother dogs is unfounded and several studies have proven that.

In a study involving the observation of the interactions between mother dog and pups, out of 190 breeders, 97.2 percent reported never witnessing mother dog shaking her puppies by the scruff. (Hallgreen 1990) Even among thousands of cases involving aggression in dogs, scruff shaking was reported as being rare and unusual (Schilder and Netto, 1991) Based on this evidence, scruff shaking is not only harmful and potentially dangerous, but also totally inappropriate.

“Normal mother dogs do not scruff or shake their offspring. Rather, they shape the puppy’s behavior with a complex physical language which uses self-inhibition from the start. Good canine moms use visual signals or simply walk away; even their physical responses do not include actual biting. By the way, they are also extremely tolerant of puppy indiscretions and we could learn quite a lot from their patience.” Reisner Veterinary Behavior Services, LLC

Scruff shaking doesn’t teach the dog which behavior is desired from the dog. It risks teaching dogs to fear hands and the owner and, as seen, it could trigger defensive behaviors. Teaching the dog an alternate, incompatible behavior that can replace the undesirable one, is often a successful approach.

Owners dealing with behavior problems should consult with a dog trainer or behavior consultant focusing in force-free behavior modification techniques. If your dog is exhibiting behavioral issues, please get professional help. Grabbing a dog by the scruff dog is definitely not the answer.

“When we engage in such behaviors toward our dogs, we are not telling the dog we are “boss,” instead we are telling the dog we are dangerous creatures to be avoided or fought off. There is no “dominance” in these scenarios—only terror and the instinct to defend oneself against attack.” ~Association of Professional Dog Trainers.