New puppy owners may often be concerned about their puppy breathing fast and may wonder whether it is normal of not. The answer is that it depends. While in many cases rapid breathing in puppies may have a reasonable explanation, puppy owners should also consider that there are also diseases and medical conditions that can cause fast breathing in puppies. A trip to the vet is always the best course action when in doubt, just to make sure everything is OK in the puppy’s health department. 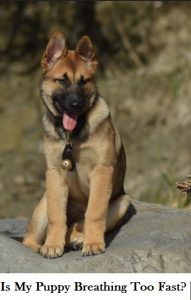 Is My Puppy Breathing Too Fast?

Generally speaking, consider that the normal breathing rate in dogs is between 18 and 34 breaths per minute, with puppies generally being at the higher end, explains veterinarian Dr. Lisa.

How does one count a puppy’s breathing rate though? It’s best to do it when the puppy is calm, awake and not panting (that means he has his mouth close without the tongue sticking out as described a few paragraphs below), this way, you have a baseline number you can compare with when you notice any rapid breathing that concerns you.

If you find it tedious counting your puppy’s breaths for an entire minute, no worries! There’s an easy-peasy way to speed up the process and take a short cut. This tip comes from the Tufts University, Cummings Veterinary Medical Center. Simply, count the number of breaths your puppy takes in 30 seconds (use a stopwatch for this or have a helper count for you) and then multiply that number by two.

Is 30 seconds too much? OK, you can further take a short cut and cut the time even more if you’re good in math. Simply, count those chest motions for 15 seconds and then multiply them by 4.

Did you know? When it comes to a pup’s respiratory rate, the brain is the primary controller. It receives input from special sensors that are responsible for detecting the levels of oxygen and carbon dioxide in the blood.

My Puppy is Breathing Fast After Exercise 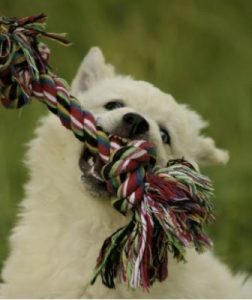 If your puppy is breathing fast after a walk, after playing in the yard or because it is hot, the rapid breathing may be perfectly normal. Dogs do not sweat like humans do (they only have a few sweat glands on their feet) and therefore they must rely on other means to cool their bodies down.

With the mouth open and long tongue sticking out, puppies are not only cute, they’re taking advantage of the wonders of evaporation, as the moist surfaces of their mouth and tongue lower their core temperature down.

Don’t get too worried about your pup’s breathing rate when panting. When a puppy or dog is panting, the respiratory rate increases dramatically, which can be alarming for new puppy owners.

Warning: puppies tend to overheat fast and get tired from lots of exercise compared to adult dogs. Keep an eye on them for signs of being tired or hot, especially in those brachycephalic puppies! 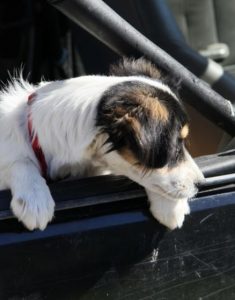 My Puppy is Breathing Fast in the Car/Crate

Puppies can get quite worked up emotionally when they are exposed to situations they are not comfortable with. In this case, the rapid breathing is based on those specific contexts, meaning that it happens specifically in those precise circumstances. Then, once your puppy is let out of the crate or he has reached his destination after a car ride, unless there are no other stressful events going on, he should go back to breathing normally as the process of homeostasis kicks in.

Here’s a tip: If the car or crate seems to be making your puppy nervous, try taking small baby steps to help your puppy adjust to riding in the car or being crated. Start slow and make sure to add rewards such as toys and tasty treats along with these activities to make them fun. If your puppy is breathing fast or panting in the car, consider that it could also be he is prone to getting car sick. Consult with your vet.

” Excitement, anxiety, fear, pain or even happy anticipation can all increase your pets respiratory rate  via the limbic system of its brain.”~Dr. Ron Hines

My Puppy is Breathing Fast When Sleeping 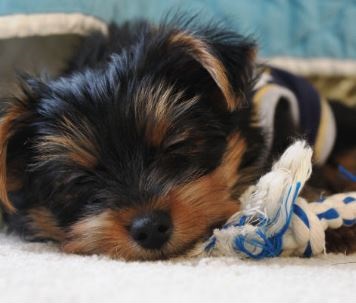 “Help, my puppy is breathing really fast while sleeping!” This was a call we often used to get at the veterinary clinic. Behind this call there was always a very concerned owner wondering if he should be bringing the puppy in.

We were specifically trained on how to reassure these concerned puppy owners after asking a bit of basic “triage” questions such as: Is there also twitching/whining/moving during his sleep? Is the puppy normally active and playful when awake?  Does the rapid, erratic breathing stop once he’s awake?

When the owners answered “yes!”  to all the above, we simply told them that most likely their puppies were healthy, happy campers who were simply “acting out” their dreams.

Yes, because puppies, just like humans, dream and their REM (Rapid Eye Movement) stage can be quite dramatic to watch at times. If you feel tempted to wake up your puppy because you think he’s having a bad dream (such as being chased by your next-door neighbor’s kitty), please don’t. Sleep is very important to puppies as that’s when they basically get to do a lot of growing and developing, so yes, as the saying goes, let sleeping puppies lie!

“I personally would not be too concerned about this sort of respiratory rate while a puppy is sleeping, in young animals it can be variable and it can also be variable during sleep periods due to episodes of rapid eye movement sleep { REM } and other factors.  I would be much more concerned about how the puppy is when awake, if the puppy is then acting normally you would have few problems.”~ Dr. Scott Nimmo 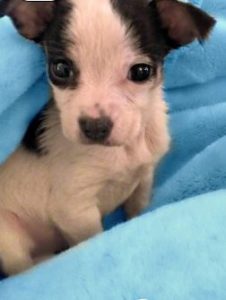 Is My Puppy Breathing Fast from Disease?

Dyspnea, is the medical term used to depict fast, labored breathing. Basically, the term is coined to describe respiratory distress caused by some pathological disorder that often warrants immediate veterinary attention. Generally, there is no obvious explanation for this type of breathing to occur, in other words, the puppy didn’t exercise, his environment is not hot and there seems to be no reason for the puppy to be stressed or excited.

Puppies who are breathing fast because of some underlying disease may tend to show signs of trouble breathing by assuming abnormal positions such as keeping the head and neck extended or the elbows held wide apart, away from the body.

What diseases or conditions can cause a puppy to breath fast? There are several respiratory and non-respiratory disorders known for causing this and certain medical conditions. Anemia, heart problems, circulatory problems, presence of heartworm, infections, fever, dehydration, pain, shock may cause changes in a puppy’s normal respiratory rate.

Often these disorders and conditions are accompanied by other symptoms on top of the increase in respiratory rate such as coughing fits, pale gums, lethargy, loss of appetite, increased temperature, congestion, and exercise intolerance, but sometimes puppies may hide their symptoms or they may not be readily recognized by puppy owners. It’s always best to err on the side of caution and see a vet, especially when it comes to something serious as abnormal breathing.

“When a dog’s respiratory rate is persistently high and can’t be attributed to any of the above environmental factors, it can signal a health problem such as anemia, congestive heart failure or various respiratory disorders.” Dr. Marty Becker

Did you know? Rapid breathing may also be seen as a side effect of a medication or a reactions to vaccinations. If your puppy is breathing fast after vaccines or taking a medication, consult with your vet to be safe.

Disclaimer: this article is not meant to be used as a substitute for professional veterinary advice. Puppies may breath rapidly for a variety of causes. Some of them are pretty obvious and there is likely nothing to really worry about, while others warrant a veterinary visit. If your puppy is breathing abnormally fast while awake and there doesn’t seem to be an explanation, it’s best to err on the side of caution and contact your vet immediately.