Dogs come in a wide array of different shapes and sizes and one of the most distinguishing features is the fact dogs come in many fascinating coat colors. Some coat colors are quite common, while others are quite unusual to come by. As much as a dog’s coat color is impressive, it’s important to avoid choosing a dog based exclusively on coat color or looks alone. Other factors such as health and temperament and activity levels are important factors to consider.  Dog owners must also be wary of breeders who breed for a specific coat color only, ignoring other important aspects such as health, conformation and temperament. In some cases, some stunning dog coat colors come with a price: associated health problems that perspective dog owners should be aware of. 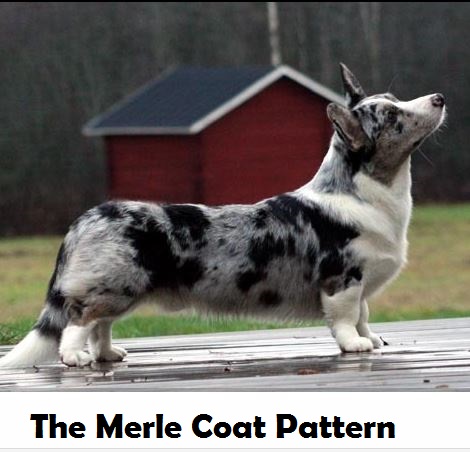 The merle coat is a fascinating coat pattern characterized by a marbling effect of dark patches against a background of the same color, only lighter.

There are different varieties of merle such as blue merle (with mottled black patches) and red merle (with reddish patches) and merle dogs may also have blue eyes or eyes of different colors (complete heterochromia) along with flecks and marbling.

As much as a merle coat is appealing to the eye, it’s associated with some serious health conditions.

For example, breeding a merle with another merle is asking for trouble as this can lead to puppies that have two copies of the merle gene, which are referred to as double merle puppies. Double merle puppies are prone to deafness and blindness, and are susceptible to the effects of the sun, which predisposes them to skin cancer. To prevent transmission of hereditary problems that are associated with the merle gene, breeding two dogs with this coat should be avoided.

“Merle is a random dilution gene… think of bleach. Take a tooth brush and dip it bleach. Now splatter a black t-shirt with the bleach. You will NEVER get the exact same design twice. This is what the merle gene does.. Since the places that merle gene lands are rather random, you get all different looks. Patches, dots, spots, bands for example. If the gene lands in the eyes, we get beautiful and highly desired blue eyes! If the gene lands enough on the nose, especially with a few other genes in the mix, you get pink on the nose.”~ Carol, breeder at Keen Pomeranians

Did you know? A merle dachshund is called a dapple. 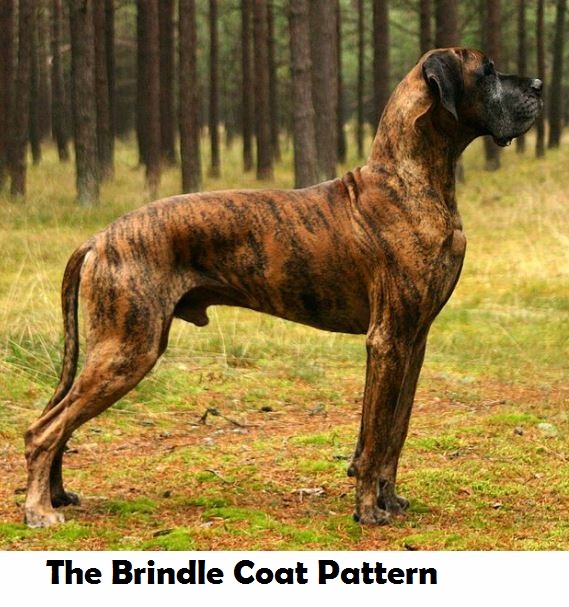 Like merle, brindle is also a coat color pattern, it is often described as being “tiger-striped.” The stripes are irregular and dark against a lighter base color that is often fawn, brown or gray.

The brindle coat pattern is found in several dog breeds including great danes, bulldogs and boxers. In boxers, black brindle or reverse brindle may occur, where a heavy concentration of black striping covers almost all the fawn background making it look as if the coat is actually black with fawn stripes.

In dogs with long, wiry or curly fur, the brindle markings may appear less distinct.

There are several variations of the brindle coat color pattern such as blue brindle, red brindle, liver brindle, fawn brindle and brown brindle.

Did you know? Jack was a brindle bulldog that was featured in the famous book “Little House on the Prairie” books by Laura Ingalls Wilder. 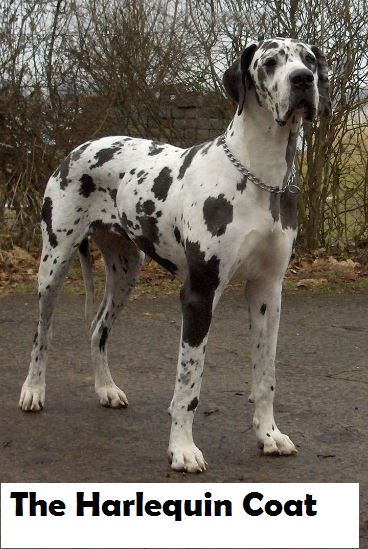 The harlequin is also a specific color pattern. In the harlequin, the base background color is pure white while gray or black torn patches are randomly distributed over the dog’s body.

The black patches should ideally be not too small but, at the same time, not too big as to cover large areas and appear like a blanket.

It can be said that the harlequin coat pattern is related to the merle pattern. Basically, in the harlequin, a white background is present instead of the usual blue background as seen in merles.

There are not too many breeds boasting the harlequin coat. The most popular one is the great dane. Some people confuse a young  harlequin great Dane for a Dalmatian. Even though both breeds are technically white with black areas, the Dalmatian has white smooth rounded spots while a harlequin great dane has torn patches.

Producing this coat color is not easy and often cannot be attained by just simply crossing two harlequin specimens.

“Dr. Leigh Anne Clark and colleagues at Clemson University have recently discovered the gene that causes the Harlequin phenotype… The discovery is a most interesting one, as it turns out the harlequin gene isn’t a “color” (pigment producing) gene at all. The harlequin gene simply alters the affect of the merle gene, so that the diluted regions (of merle coloration) otherwise seen are largely removed from the coat pattern, leaving behind the bi-color dog we know as a Harlequin… there is now proof positive that all Harlequins are genetic merles.~Great Dane Club of America

Did you know? The name of the harlequin coat pattern is inspired by “Arlecchino” a comic servant character from the Italian Commedia Dell’ Arte known for wearing a typical checkered costume. 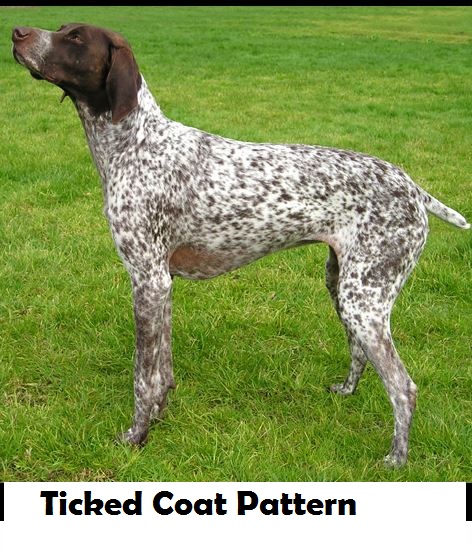 Ticked coat patterns are characterized by smaller spots of black or colored hairs found on a white background.

One main feature of this pattern is that it’s present only in the white parts of the dog’s coat. You may see ticking therefore on widespread areas or on just certain areas, such as on the white of a dog’s legs or on the white part of the muzzle.

An interesting fact about ticked coats is that puppies are not born with them but rather develop the ticked coat pattern later as they develop. 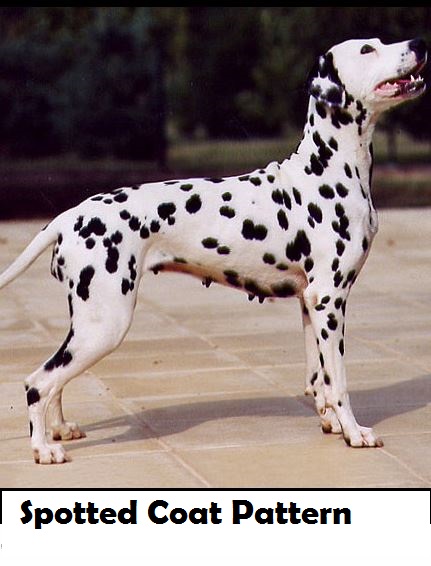 Among the plethora of dogs breeds populating this planet, the Dalmatian is the only spotted breed and of course this breed had to make it on the list of fascinating dog coat patterns.

Cruella De Vil fell in love with the spotted dogs in the movie “The 101 Dalmatians” but dog lovers love these dogs for many other reasons other than their fur (hopefully!)

According to the American Kennel Club, a Dalmatian’s background color is pure white with round dense black or liver brown spots. The importance of the spots being this color is so important that any other color is means for disqualification in the show ring.

Like some other dog breeds, this appealing coat pattern comes at a price. The same genes responsible for the spots are also what may predispose this breed to deafness due to the extreme piebald (sw) pigment genes.

Deafness in piebald animals is linked to the absence of mature melanocytes in one or both ears. According to veterinarian Dr. George M. Strain at Louisiana State University, eight percent of all Dalmatians in the US are bilaterally deaf and 22 percent are unilaterally deaf.

Did you know? Dalmatian puppies are born white without any spots showing, but just ’cause you don’t see them doesn’t mean they’re not there! The spots are there since birth, but they only become fully visible when the pups mature and the hairs turn black. 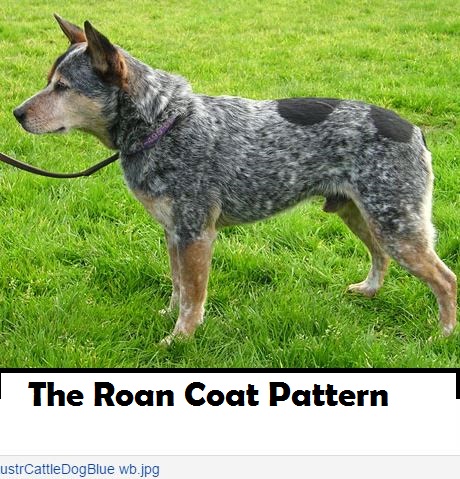 Roan and ticked coat patterns are terms that are often used interchangeably. There is still quite some ambiguity on the usage of such terms. In 1957, Little suggested that the terms roan and ticking should be used separately.

Generally, the roan coat pattern consists of a fine, even mixture of pigmented hairs and white hairs. Basically, the different colored hairs are so closely spaced that the mixture appears to be giving the impression of a blue gray or iron gray color.

A dog with a coat comprising black and white hairs is called a blue roan. Other roan types include red roan, lemon roan, liver roan and brown roan.

“You may hear roan Australian Cattle Dogs referred to as “speckled” or “mottled” – these terms just refer to different extents of roan and ticking.”~Dog Genetics Co. 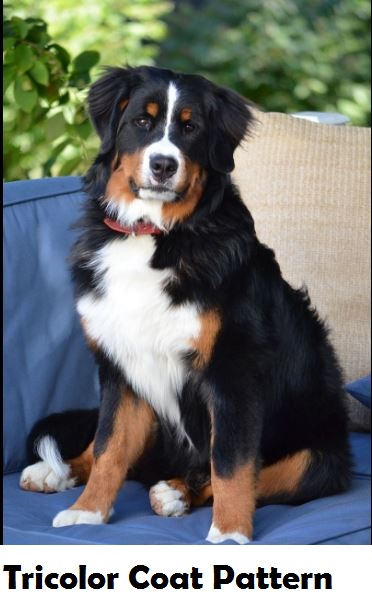 As the name implies, this dog coat  pattern is made of three different colors.

Usually the three colors consist of black, tan and white. Generally, it’s a black and tan dog with white markings.

However, there are also tricolored dogs coming in liver, blue and isabella.

As seen, dogs can boast quite some fascinating coats. There are of course, many other colors and patterns that are equally attractive. What is your favorite coat color and pattern?