When it comes to dog breeds, many of them are provided with nicknames. Some of these dog nicknames are plain cute, describing endearing traits or physical characteristics, others are more on the honorable side, and then some are crafted to depict some significant roles these dogs filled. We therefore have dog breeds nicknamed the “Firehouse Dog” and the “Gamekeepers night dog,” just for sake of example, and then we have the “Dutch Barge Dog.”As the name implies, these dogs were employed in the Netherlands and worked nearby rivers or canals. Can you therefore guess  this trivia question?

What dog breed is nicknamed the “Dutch Barge Dog?”

The correct answer is D, the Keeshond is the Dutch Barge Dog!

The keeshond is an an ancient dog breed dating back to the 16th century in Holland and that is categorized as a German spitz dog, also known as Wolfsspitz. German spitz dogs are characterized by a head that has a wolfish or fox-like appearance, a double coat, high-set triangular ears and a tail curled over the back.

The keeshond is therefore related to other spitz-like breeds such as the Samoyed, Chow,  Finnish Spitz , Norwegian elkhound and Pomeranian. Because of being related to the latter, the keeshond was also often infamously referred to as the “overweight Pomeranian.”

The hallmark of this breed is its spectacles, dark lines running from the outer corner of the eye to the base of the ear which makes these dogs  appear as if they’re wearing glasses.

Did you know? The presence of such lines is so important that the American Kennel Club considers the absence of “spectacles” a very serious fault!

Also known as the “Smiling Dutchman,” due to this breed’s bright, cheerful, and lively demeanor, the keeshond was used in the 17th and 18th century as a watch dog on barges that navigated through the Rhine River, a river that flows from Germany to the Netherlands.

What are barges exactly? Barges are small cargo vessels equipped with living quarters for the captain and his family. Keeshonds worked as zealous guardians of their owners’ belongings on these vessels and made great playmates for their children.

However, as the barges became larger, this breed became less favored and soon became scarce. Thankfully, their numbers were restored courtesy of the efforts of Baroness Van Hardenbroek.

Did you know? The plural form of keeshond is “keeshonden.” So if you own a couple of these fellows, remember this! 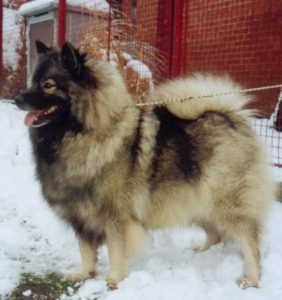 While keeshond lost their jobs on the barges long ago, they have still retained their strong watch dog instincts and are always on duty, sounding the alarm for anything they believe is unusual. Being sensitive, keeshond may be reactive towards loud noises and may not cope well in families where there is lots of tension or shouting.

They are also nicknamed “velcro dogs” because of their tendency to follow their owners around and wanting to be involved in every activity. This breed therefore does best in the home with its family as keeshond are very people oriented and being around their people is what makes them most happy!

Did you know? Talk about politics! The name Keeshond derives from Cornelis “Kees” de Gijselaar, Dutch politician and leader in the rebellion during the Dutch Republic against the House of Orange. Cornelius owned a keeshond which soon became a symbol of the rebel party. When Cornelis was executed, the breed unfortunately became unpopular because of its political association.

The Keeshond Club, The History of the Keeshond, retrieved from the web on December 6th, 2016