As mentioned, a retriever is a type of gun dog. As the name implies, retrievers were selectively bred to retrieve game for the hunter. When the hunter aims and then shoots, these dogs are sent to retrieve any downed birds that land to the ground. In order to excel in their work, well-trained retrievers must meet certain requirements.

Retrievers  must be under control so to not interfere with the hunter as he’s aiming to shoot the birds. Sometimes the hunter may be in a small boat, and a rambunctious dog may easily capsize the boat. This gun dog’s ability to “steady to wing and shot” is therefore not only a matter of obedience but moslty a matter of safety.

Retrievers may also have a good memory so that they can remember where the fallen birds have landed, even when visibility is not the best. Since dogs do not see where the birds have exactly fallen, hunters call this a “blind retrieve.”

On top of retrieving downed birds with precision, it is also quite imperative that retriever dogs return the birds with a soft mouth so to prevent spoiling the meat which will then be later served on the table.

All these tasks require a dog with a certain predisposition to follow directions and stay focused on the task, qualities that fall under the term of “biddability.” Retrievers are dogs who are often prized for their biddability, which is the opposite of what people describe as “head strong,” dogs who are more on the independent side, but not because of being stubborn, but mostly because of different work requirements. 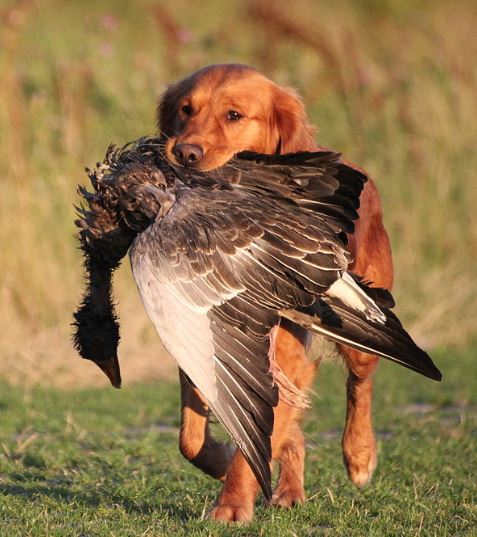 The golden retriever was selectively bred to retrieve downed waterfowl such as ducks and upland game birds. The breed was originally bred in Scotland in the mid 19th century when hunting for game birds both on water and land was particularly appealing to the Scottish elites of that time.

The ability to retrieve on land and water was a must back then considering that, at that time, the Scottish hunting grounds were covered in marshy ponds and rivers.

With the introduction of guns firing at longer ranges in the 1800s, there was a need for hunting dogs that would retrieve at great distances and on harsh terrains. It was the goldens who helped fill that role.

To succeed in their hunting tasks, Golden retrievers were selectively bred for a long coat with a dense undercoat meant to provide a nice layer of insulation topped with a water repellent top coat meant to help them dry off quickly. The biddable nature of golden retrievers makes them suitable today as family dogs that lend themselves to training and work as therapy dogs and assistance dogs. 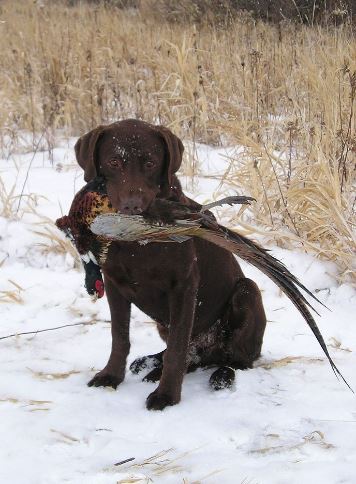 Labrador retrievers originated from the island of  Newfoundland, Canada, where they were selectively bred as helpers for local fishermen in the early 1700s.

Labrador retrievers at this time were mainly used to haul nets and ropes and retrieve fish who were able to evade the hooks.

Impressed by this dog’s utility in working in the chilly North Atlantic waters, English sportsmen imported a few specimens to England and converted them into hunting companions. Instead of retrieving nets, Labradors were used to retrieve downed birds. Their powerful noses and willingness to follow directions, made them excel in this task.

Labradors are powerful dogs with a hardy water-proof coat that helps them tolerate exposure to cold water for extended periods of time. Their broad, strong tails and webbed feet helped them excel in becoming excellent swimmers.

Today, Labradors rank high as friendly companions and their eagerness to work has made them excellent candidates as drug and explosive detection, search and rescue and therapy or assistance dogs. 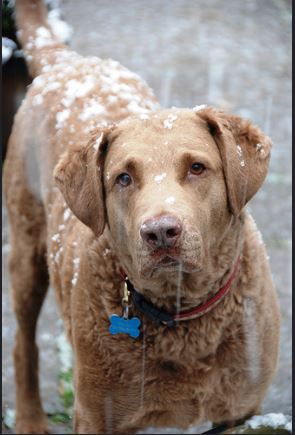 The Chesapeake Bay retriever is not as common as the golden or Labrador retriever, but deserves a spot of honor among the retrieving dog breeds.

As other retrievers, Chesapeake Bay retrievers are large dogs with a history of retrieving waterfowl for hunters. This breed was developed in the United States in the 19th century

While the Labrador retriever has a smooth coat, the Chesapeake has a wavy coat. The coat is also water proof and may have a slightly oily feel that may have a musky odor.

The toes are webbed which contribute for swimming, not to mention this breed’s powerful chest that helps break ice apart when hunting ducks in the frigid waters of the Chesapeake Bay.

The Chesapeake also boasts a unique amber, yellowish  eye color, which is quite unusual in dogs, considering that most dogs have brown eyes. Chesapeake are happy dogs, with lots of stamina and very smart. They have the potential to make wonderful companions when socialized well and trained. 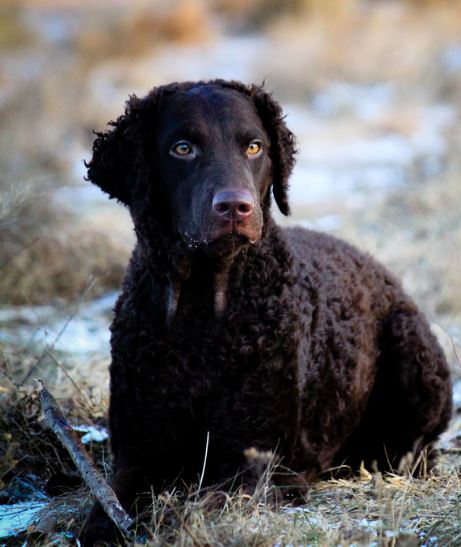 As the name implies, this retriever has the distinguishing factor of having a heavily curled coat characterized by tight, crisp curls.

This dog breed was originally bred in England for the main purpose of hunting waterfowl. This is one of the oldest of the retrieving breeds, possibly established as early as 1860, and it also gives the impression of being  one of tallest retrievers, perhaps because of the moderate angulation of front and rear which gives the idea of being higher on leg.

Curly coated retrievers were prized for their ability to retrieve both furry and feathered animals from the heaviest cover and the iciest waters.

Affectionately called “curlies,” curly coated retrievers are still used in several countries as bird dogs that hunt both upland birds and waterfowl. The American Kennel Club describes the breed as being wickedly smart, a trait that makes it highly trainable and cherished as  a loyal companion both for the home and in the field. As long as they are provided with sufficient exercise and mental stimulation, as the other retrievers, curlies can become laid back in the home. 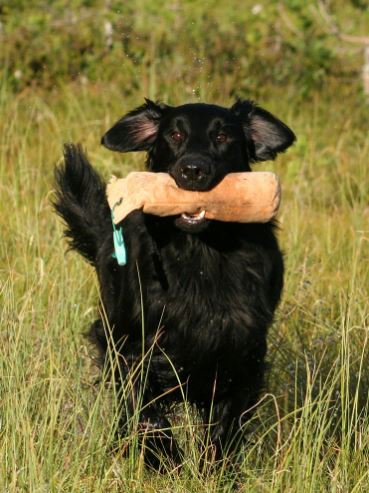 As the name implies, the flat coated retriever is a retriever with a coat that is flat, and not curly. This gun dog breed originates from the United Kingdom in the mid-19th century where it was selectively bred to retrieve both on land and in the water.

While the most common coat color is black, flat coated retrievers are also sometimes seen in dark brown and sometimes yellow.

The flat coated retriever was quite popular for some time, but then its numbers decreased when it was outranked by the more popular golden retriever.

As other retrievers, this breed has a tendency to want to please people and is an active companion who requires plenty of exercise and mental stimulation.

The fact that flat coated retrievers have a strong sense of smell along with a biddable nature, makes them excellent candidates as drug sniffer dogs. Their great  temperament also makes them potentially good assistance dogs.

The Nova Scotia Duck Tolling retriever is a medium-sized dog. It is the smallest of all the retrievers. Due to their small size, Tollers are often confused for a smaller version of the golden retriever.

As most of the other retrievers, this breed was selectively bred for hunting. As their name implies, Nova Scotia duck tolling retrievers originated from southwestern Nova Scotia, Canada where for many years they were used for luring waterfowl (tolling) within shooting range and then retrieving the downed ducks.

Want to learn more about the unique hunting style of the Nova Scotia duck tolling retriever? Read here: how Nova Scotia tollers hunts ducks.  Quite fascinating that is!

The Toller as several other retrievers is blessed with a water-repellent double coat that helped him retrieve ducks  from icy waters. Tollers are high energy dogs that require loads of exercise and mental stimulation. They are also very smart. To make them happy, they do best when they have a job to do. Nowadays, they are still used for hunting but also in several canine sports such as agility and dock diving. Tollers also make great search and rescue dogs.