The term watchdog is often used interchangeably with the word guard dog, but there are clear distinctions between the two. Unlike the guard dog (which should only be trained by professionals as it requires an extremely high level of refined training), the watch dog is not meant to physically restrain or attack intruders. Generally, the term watchdog is used to depict a dog who simply keeps an eye on his surroundings and who will sound the alarm if something is amiss. Ideally, a good watch dog should be able to discriminate between normal and abnormal activity. Not all dogs have what it takes to make a good watch dog. 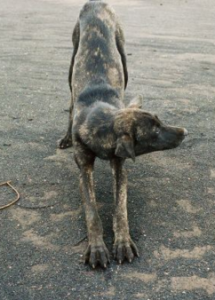 For centuries, mankind has relied on a dog’s barking behavior. Back in time, when humans lived in ancient campsites, dogs were used as an effective warning system, alerting humans of invading tribes and dangerous predators. Unlike wolves, coyotes, foxes and jackals which rarely barked, humans likely appreciated the fact that the early dogs were capable of emitting loud and persistent vocalizations. Most likely, humans,back then, must have selectively bred dogs for their watchdog capabilities. The dogs with the louder barks were allowed to reproduce while the ones that rarely barked were disposed of.

This may explain the divergence in barking behaviors between dogs and wild canines, suggests Stanley Coren in the book “How To Speak Dog: Mastering the Art of Dog-Human Communication.” Interestingly, selectively breeding dogs for barking wasn’t likely an arduous task. When it comes to passing down the barking trait, barking appears to be a dominant gene. When the for-the-most-part silent basenji was bred with the noisier cocker spaniel in an experiment by Scott & Fuller, the result was a litter of dogs with a vivid predisposition to bark. 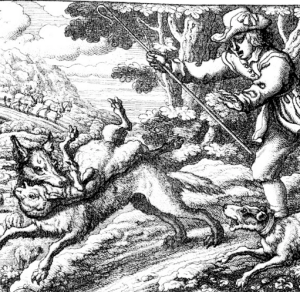 Did you ever hear about Aesop’s fable,”The Boy Who Cried Wolf?” In this fable, a shepherd boy repeatedly tricks villagers into thinking that a wolf is attacking his flock of sheep. “A wolf, a wolf!” the boy would scream as all the alarmed villagers gathered. After several repetitions, the villagers learned to no longer pay attention to the boy’s false alarms. The day though when a wolf really appeared, none of the villagers believed the boy’s cries so all the sheep ended up eaten by the wolf. Moral of the story? Dogs who are hyper alert and constantly bark at every single leaf falling from a tree don’t make good watchdogs. Bark after bark, just like the villagers of Aesop’s fable, the owners learn to ignore the constant senseless barking, even on that infamous day when a burglar is entering the home. Often, being hyper alert is based on fear and is seen in dogs who haven’t been socialized enough.

A Movie and Pop-Corn 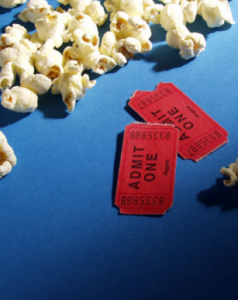 On the other side of the spectrum are dogs who are overly placid and sluggish, making them poor watch dogs. Should a burglar make it into their property, they might greet him like a long-lost friend and maybe even invite him over for a movie and some popcorn. Some dog breeds have a reputation for making poor watchdogs with a too friendly “feel free to come over” attitude. They may not bark at the intruder fiddling with the lock, but they may go bonkers when they see the neighbor’s cat. Some dog breeds were selectively bred for certain tasks and keeping an eye on their surrounding may be on their low end of their “to-do list”. Stanley Coren in his book the Intelligence of Dogs lists a dozen dogs breeds with a reputation for making poor watchdogs. 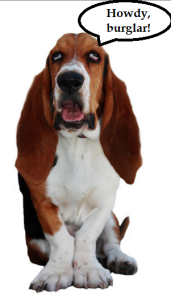 The ideal watchdog is alert and will sound the alarm when something really deserves the owner’s attention. A good watchdog will keep an eye on people walking by, but will only bark if something unusual happens. It’s as if these dogs were saying  ‘Hey, owner something’s up!” Barking for the most part when something is out of the ordinary is a fundamental quality of a good watchdog. Hypervigilance or sluggishness are not good traits in a good watchdog. Stanley Coren in his book the Intelligence of Dogs lists 15 breeds with the best watchdog capabilities. The list is in descending order with the best watchdog breeds at the very top.

A Grain of Salt

While lists of best and worst watchdog breeds may be helpful, they must be taken with a grain of salt. Dog behavior is the result of many variables and a dog’s ability to make a good or poor watchdog varies based on genetics, level of socialization, life experiences and training. Dogs are individuals, and as such, their watchdog capabilities vary even within a certain breed.

While many watchdogs are naturally inclined to sound the alarm, some dogs may benefit from some guidance to learn how to discriminate what’s worthy of barking from what is not. The best way to reinforce good watchdog barking is to acknowledge the stimulus and thank the dog for a well-done job!