Today’s dog word of the day is whale eye. What do dogs have to do with a whale’s eyes?  The term “whale eyes” was labeled by author, dog trainer and expert on dog aggression Sue Sternberg. It’s used to refer to when the white portion of the dog’s eye shows (not to be confused with a dog’s third eyelid). Also known as “half moon eye” whale eye in dogs is mostly seen when the dog turns his head slightly, but his eyeball remains turned to the side, fixed on something. When this happens, the white part of the eye, the sclera, appears as a  white crescent-like shape in the corner of one eye. You don’t normally see much of the white of a dog’s eyes other than in certain particular circumstances. 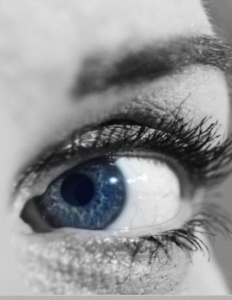 Interestingly, when it comes to the white portion of the eyes, humans come well equipped compared to dogs and other animals. In humans, the sclera of the eye is very visible, not only because of its contrasting white color, but also because the iris is relatively small compared to other animals.

Ever wondered why we don’t have the whole eye of the same color? There are theories that our sclera is so visible for communicative purposes so that others can see where we are looking and we can use our eyes as a form of non-verbal communication.

Interestingly, research on dogs has revealed that during the process of domestication, dogs have relied on picking up visual cues from our eyes too! Indeed, when it comes to picking up visual information, dogs seem to rely more on human eyes than the eyes of one another. After all, dogs don’t rely much on eye contact among each other (steady, direct eye contact may mean trouble in the dog world), therefore that may possibly explain why a dog’s sclera is just a narrow rim of white connective tissue that’s much less conspicuous than in humans.

A Look a Context

Paying attention to what is occurring when the dog shows whale eyes is important so to keep tabs on preventing putting the dog in a similar situation in the future. What is happening when the dog shows whale eyes? Is the dog being hugged? Photographed?  Is a person or dog getting too close to his toy or bone? Is another dog invading his personal space?

Whale eyes are often seen when the dog is in a situation that makes him feel uncomfortable. The dog doesn’t want to stare directly, so he’ll avert his head the other way, but at the same time he doesn’t want to take his eyes off from what is concerning him.

You may see it when a dog is cornered, guarding a possession or in an uncomfortable situation such as when being photographed or hugged. The dog may feel stressed, anxious, fearful or defensive.

Whale eye “is thought to occur because the dog is so afraid that he is not looking at you, but he’s too afraid to take his gaze away from you entirely. The result is a dog who is looking at something with his eyes while not facing it.” ~ Karen London  Ph.D. 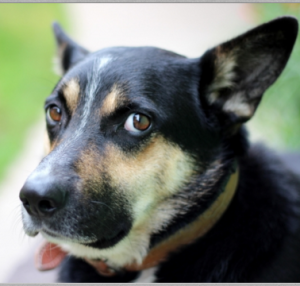 As with other canine body language, it’s a good idea to look at the context that evokes it, but it’s also worthy paying attention to the overall accompanying body language versus singling out only one signal.

Whale eye is often accompanied by tense facial muscles, a mouth tightly closed, dilated pupils, a stiff body, and there may also be more evident signs such as some growling and a curled lip.

Whale eye may be seen just a split second before a dog is about to snap or considering to snap should things escalate.

If you notice the half-moon eye in your dog, it’s time to give the dog space and plan how to avoid putting the dog in a similar situation in the future. Consult with a behavior professional for guidance on how to reduce stress in the dog and prevent situations from escalating.

“If you see the half moon eye when the kids approach the dog or are interacting with the dog, it’s time to intervene and give them all something else to do.” ~Doggone Safe

No Rule of Thumb 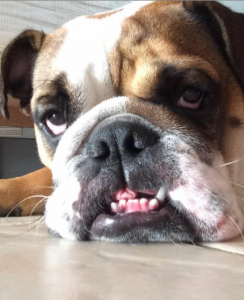 Paying attention to context and other accompanying body language can tell us a whole lot of what may be going on. Just because we notice the white of our dog’s eyes doesn’t necessarily mean though that our dogs are stressed, fearful or uncomfortable.

Dogs may show whale eyes for several other reasons. Whale eyes may appear just because dogs are moving their eyes to look at something, but they don’t feel like moving their head.

For instance, a dog may be lying down with his head resting on the floor and he may not feel like moving his head, but may still want to keep an eye on what his owners or other dogs are doing around him.

A dog may show whale eyes as a sign of a pinched nerve in the neck as dogs with this painful condition are reluctant to turn their head. Some dogs are also anatomically built in such a way that their eyes have the sclera that shows more without anything stressful happening. For example,  dogs with short snouts and shallow sockets may have a more visible sclera compared to other dogs.

Did you know?  How did the word “whale eye” end up relating to dogs? Patricia McConnell, in the book “For the Love of a Dog: Understanding Emotion in You and Your Best Friend” mentions that the term “whale eye” first came from a client of dog trainer Susan Sternberg who noticed how the eyes of whales she had been observing showed their whites no matter in which direction their head was pointing.