When it comes to the world of dog breeds, many of them are provided with nicknames and some of them are plain cute, others are more on the honorable side while some others portray what the dog breed was used for. We therefore have dogs nicknamed the “Firehouse Dog” or the “Dutch Barge Dog” and then we have the “Gamekeepers Night Dog.” As the name implies, these dogs likely pulled guard duty at night and therefore were dogs who must have looked quite imposing. Can you therefore guess this trivia question?

What dog breed is nicknamed “the Gamekeepers Night Dog?”

The Correct answer is B, the dog nicknamed the gamekeeper’s night dog is the bullmastiff.

What is a Gamekeeper?

To better understand the nightly duties of the Gamekeepers Night Dog, one must first understand exactly what is a gamekeeper.  A gamekeeper is basically an individual employed by a landowner who is responsible for managing an area of the countryside.

His main job is to ensure that there is enough game for shooting or fish for fishing. Gamekeepers, therefore, monitor farmland, woodland and moorland, to ensure that game birds, fish and wildlife in general are not threatened.

Poaching, the illegal capturing of wild animals, was a problem back in the days when impoverished peasants were searching for  sustainable food. In the 17th and 18th centuries poaching was considered a serious crime that could have lead to imprisonment or even death by hanging.

Back in those times, the nobility had exclusive rights to hunt and fish on the lands they ruled and any intrusion by poachers was considered a serious intrusion of those rights.

As one may imagine, a gamekeeper had to pay a lot of attention to his surroundings, but no worries, here comes the bullmastiff!

The bullmastiff is a large dog who was purposely developed by 19th century gamekeepers to help them guard large English estates. Standing between 25 and 27 inches at the withers and weighing between 100 and 120 pounds, the bullmastiff provided quite an imposing presence.

Bullmastiffs were created by crossing mastiffs with the early ancestors of the bulldog. Mastiffs were large but they were too slow, while bulldogs were fast and tenacious but they weren’t much imposing, so they combined these two breeds and got the best of both worlds. And the rest is history.

Bullmastiffs were known for their fearless and confident demeanor and for tracking quietly covering short distances quickly. While bullmastiffs today also come in a fawn coat, back in time when poachers abounded, the brindle coat was particularly cherished as it worked best for camouflage in the forest at night.

Silence was a virtue when looking for poachers on estates, therefore the bullmastiff has a history of not barking much.  The American Bullmatiff Association describes bullmastiffs as being independent thinkers. They had to make their own decisions at times but their job wasn’t to maul people. Instead, they would knock down and hold poachers until the gamekeepers arrived.

This breed’s large and square head worked perfectly for the task of  pinning the poacher down and holding him. Also known as “Poacher’s Nightmare” these dogs were quite effective in deterring poachers and keeping them at bay, so much so that poachers feared them often more than the gatekeeper himself!

“The original gamekeeper’s night dog was appropriately brindle, and this original color of choice is for obvious reasons: a brindle dog could blend well with the vegetation, with the dark muzzle and ears further providing camouflage even when his head was lifted up to sense, smell or sight the poacher. ” American Kennel Club 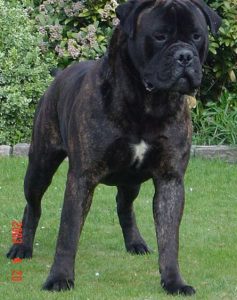 After a while, poaching declined and the bullmastiffs took a whole new role as guardian dogs. Because it was no longer necessary to camouflage in the dark, the fawn coat with a black mask became common.  Today, bullmastiffs are used mostly to fill the role as loving companions. These devoted dogs require loads of early socialization and training.

It’s important to invest time in teaching bullmastiffs to become accepting of strangers when welcomed by their owners. Ideally, when the door bell rings, a well trained mastiff should accompany the owner at the door and patiently wait behind the owner or on a mat with a “wait and see” demeanor. When the person is accepted in the home, he should accept that. Failure to provide sufficient socialization may lead to a bullmastiff is suspicious of everyone, which can lead to fear and defensive biting.

While bullmastiffs are large, despite their fleetness of foot they are overall calm and quiet as adults, once the boisterous puppy times are over. Many may find it appealing that these dogs are in need of moderate exercise and are generally pretty much mellow fellows.

“Fearless and confident yet docile. The dog combines the reliability, intelligence, and willingness to please required in a dependable family companion and protector.”~ American Kennel Club