In the world of working dogs, body conformation is important and the dog’s topline has played an important role in allowing dogs to perform the tasks they were bred for, but exactly what is a dog’s topline? You may have heard this word before perhaps at dog shows or among breeders, but the term is often used vaguely without giving out much information about what it truly depicts. So today we will be taking a closer look into what a topline is in dogs and its importance. 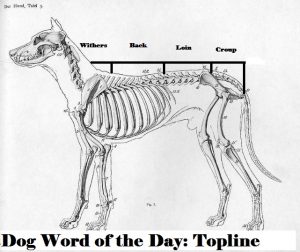 What is a Dog’s Topline?

So what is a dog’s topline? A dog’s topline is the profile line that goes from the dog’s shoulders to the base of the tail, tells us Veterinary Sports Medicine and Rehabilitation specialist Dr. Christine Zink in the book “Peak Performance: Coaching the Canine Athlete.”

Imagine drawing with a pencil the profile of the dog’s body from the withers (where the shoulders meet the neck, right over the scapula blades) to the tail. That’s the profile line of the topline.

The topline therefore includes the back (area between withers and loin), the loin (from end of the rib cage to the pelvis) and croup (area behind the hips and below the tail).

Did you know? The profile line that contours the brisket (the front part of the chest) and the abdominal floor is known as “underline.” Another term that often generates confusion is “backline.” Some people use the term backline to exclusively depict the profile line drawn from withers to tail, and top line to depict the whole silhouette of the dog from the dog’s occiput to tail. In this article we decided to use the term topline because that’s what the American Kennel Club‘s glossary uses to depict “ the outline from just behind the withers to the tail set.” 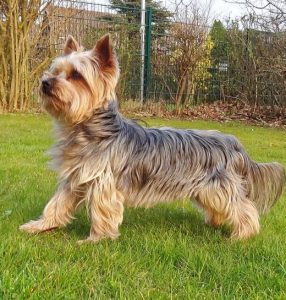 The topline can be straight in some dog breeds. So if you were drawing these dog breeds that profile line would be for the most part straight from the shoulder area to the tail.

In the world of conformation, a straight topline is referred to as being level. Most dog breeds are meant to have a level topline, therefore the majority of dogs tend to fall under this category.

Examples of dog breeds with a straight topline include the Skye terrier, Yorkshire terrier, Chihuahua, Labrador retriever, chow chow, Golden retriever and many, many more. 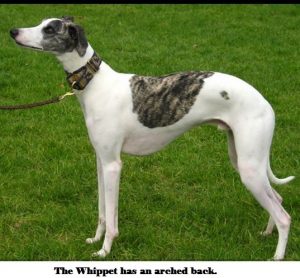 The topline can be arched in some dogs breeds. So if you were drawing these dog breeds the  profile line would arch towards the loin area.

The most notorious arched loins are found in many sight hound dog breeds such as the Scottish deerhound, borzoi, Italian greyhound and the whippet, as seen in the picture.

In these dog breeds, the arched loin allows flexibility of the spine so that the rear legs can be tucked well under at a gallop allowing them to cover more ground with each stride.

If one observes closely, in these breeds at a gallop, the rear foot is almost able to nearly pass the point of shoulder, as seen in the picture below. When a dog’s arch is continuous affecting also the croup, it tends to lead to the low tail set often seen in many sight hounds.

When it comes to arched toplines, it’s important to make one important distinction though. No American Kennel Club standard calls for a topline in sighthounds starting to rise from the withers, points out dog show judge Patti Widick Neale. It’s the back that rises a little at the loin area and not the whole topline, as often seen in several Art Deco statues depicting greyhounds!

“The key to the arch is flexibility essential in the double suspension gallop allowing the dog to double up on the ground and straighten in midair.”~Lisa Dubé Forman

Did you know? A faulty topline that arches starting from the withers is known as “wheelback” and affected dogs have a bouncy, energy-wasting gait that interferes with flexibility. 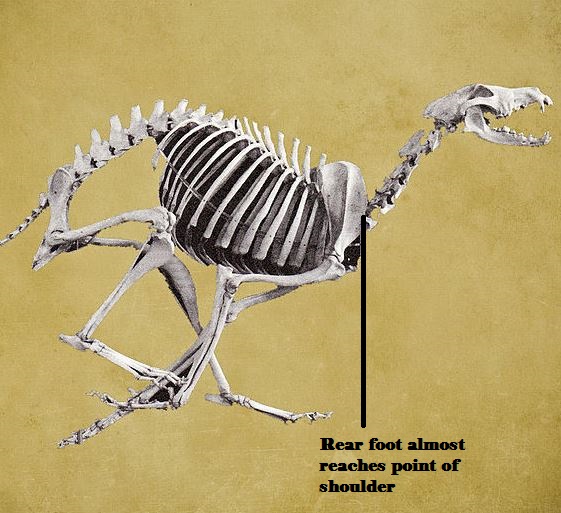 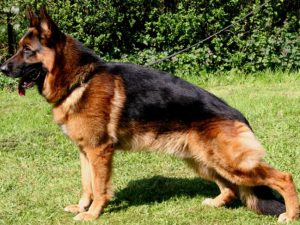 The topline can be sloped in some dog breeds.  So if you were drawing these dogs breeds, the profile line would slope towards the loin area, a bit like a mountain slope. Some people refer to this tendency as sagging or roaching back.  Dogs with a sloping topline tend to have more angulation in the rear legs which results in a lowered rear.

A notorious dog breed with a sloped back is the German shepherd. However, excessive sloping is  sadly a new trend that strays away from the breed standard. Max Von Stephanitz, the creator of the German shepherd breed, described the German shepherd as having a back that was “straight and powerful.” And then, he further added “curvature of the spine diminishes the power of endurance and speed, and is therefore, an especially serious handicap for efficiency..”

The new trend is mostly seen in the show lines of this breed. According to Louis Donald, a working dog judge, the curved spine seen in German shepherds dogs is fruit of a ”very small number of very influential people” that go by the name of “breed authorities” who promoted this feature at dog shows. The breed’s conformation therefore shifted from a straight, powerful back to sloped with an exaggerated hind leg angulation, features that would perhaps make respected Von Stephanitz roll over in the grave. The American Kennel Club doesn’t even call for a sloping back in the German Shepherd breed and actually refers to it as a fault.

Did you know? German shepherd dogs with sloping backs are now often nicknamed ” the hatchback, “downhill dog” and “dog in front, frog in back.”