Wondering what “giving eye” means when it comes to border collies? In the world of dogs, there are many breeds selectively bred to perform several tasks. We have dogs bred for hunting, dogs bred for retrieving, dogs bred for guarding and even dogs bred for providing companionship and with a history of warming up the laps (lap dogs) and feet of aristocratic ladies. Border collies were  selectively bred for herding, something these dogs do very well, hence why they’re often referred to as “the workaholics of the canine world.” In this breed, “giving eye” is something that is much appreciated by the shepherds, but can you guess what it exactly means for a border collie to give eye? So today’s Trivia question is:

What does it mean when a border collie is “giving eye?”

C The border collie is giving a mean, hard stare to the other dogs he’s working with

The correct answer is: A, The border collie is staring at the sheep so to control motion 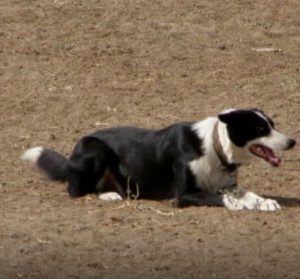 A Matter of Herding Style

A Look Back in Time 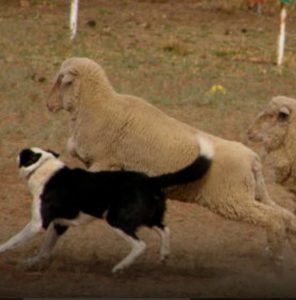 A border collie’s herding style is reminiscent of the past when a dog’s ancestors were hunting. Back in the old days, in order to enjoy a meal, it was necessary to follow a precise sequence which is known as  the predatory sequence. This sequence entailed giving eye, stalking, chasing, catching, killing, and of course, eating. Catching, killing and eating is something that is out of question nowadays as herding dogs should never hurt their sheep. Fortunately, for the most part, it appears that a herding dog’s predatory sequences has been “truncated.” In other words, it has been cut short.

So border collies will give eye, stalk, and chase and some may occasionally nip too particularly when dealing with stubborn sheep, but fortunately not very hard. However, it’s  generally quite frowned upon for a herding dog to show the grab/bite behavior typically seen in cattle heelers and some consider it a major fault. 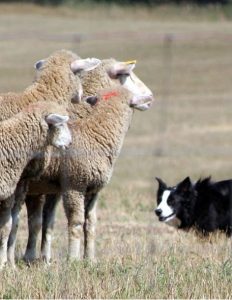 An Eye for Herding

The border collie breed gains its name from the border between Scotland and England where this dog was considered a valuable asset, courtesy of his almost inborn aptitude to follow the shepherd’s requests and his signature stare, the “eye,” with which this breed controls the flock. When border collies give eyes, they are orienting towards the sheep in a stalking position.

According to James Serpell, author of the book “The Domestic Dog: Its Evolution, Behaviour and Interactions with People” this giving eye behavior seems to act as a reward on its own and once it’s present, the only way to stop it is to remove the dog from the stimulus contributing to the behavior.

“It’s impossible to even to try to herd sheep with a pup until it shows eye. What a border collie handler does is to train the dog when and how to go in order to use the eye. But nobody can train a dog to show eye or to point.”~Raymond Coppinger, Lorna Coppinger

Movement is a Trigger 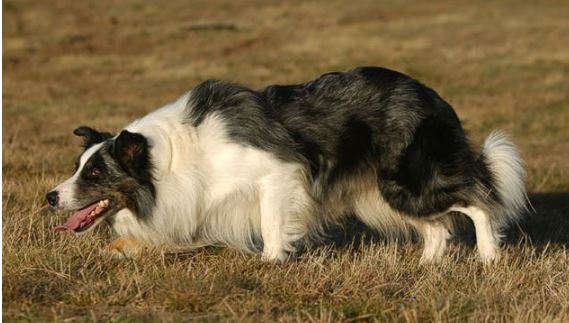 What triggers a border collie to give eye? Experiments at Hampshire College showed that the eye giving behavior in border collies was in part stimulated by the anticipation of movement. Indeed, when the border collies were introduced to a group of sedated chicken which were pretty much motionless (poor poultry!), they were not giving eye. Instead, they were carrying out all sorts of displacement behaviors such as barking at the birds or play-bowing. However, giving eye behaviors  promptly seemed to resume once the border collies detected movement (Coppinger et al, 1987)

How does the “giving eye” behavior get the sheep under control? It seems that sheep respond to it naturally because it mimics the intensity of posture seen in a wolf stalking its prey. It’s sort of a way to “exert psychological pressure,” so to say. John Holmes in the book “The Farmer’s Dog,” makes quite an interesting observation. He claims that the “eye ” is more an attitude of approach than something connected with the dog’s eye. Talk about the art of giving eye!

“A Border Collie moves livestock by controlled intimidation. He pushes them along with a threatening glare. This glare is called ‘eye’ and is probably related to the wolves’ tactic of selecting a victim in the herd by catching its eye… before starting the attack run.”~Donald McCaig

Did you know? When it comes to the amount of “eye” a dog has, dogs can be classified as having strong, medium or loose-eyes.

The Border Collie uses a direct stare at sheep, known as “the eye”, to intimidate while herding, by C. MacMillan – Original Work, CC BY 2.5