As verbal humans, we are very used to using our words to communicate our thoughts, and this tendency often also surpasses species boundaries when we use our words as well to communicate with our own dogs. One of the most common words people use to communicate displeasure is a sharp “no!” said often in a “I mean business” tone of voice. But do dogs really understand the meaning of the word no? We may assume they do based on how they sometimes react to it, but things are not always as we perceive them. 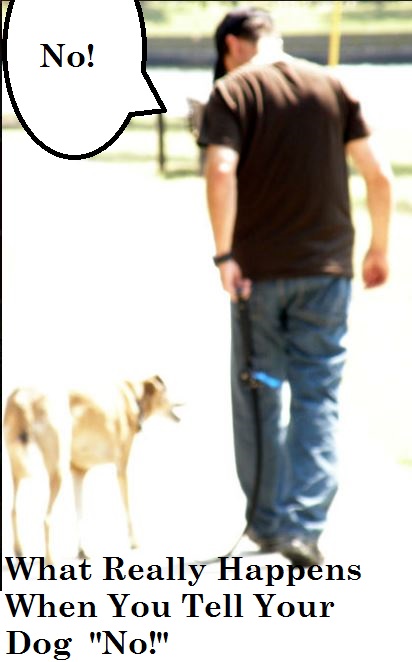 Using the Word No

Since many dogs stop in their tracks upon hearing the “no” word, it’s perceived as if the dog completely understood our message. The word “no” is therefore reinforcing to the owner as it made a bothersome behavior stop in its tracks. Since it feels good to the owner to make an unwanted behavior go away, the word no will therefore be used more and more in similar contexts. So next time Rover tries to dig a hole in the yard, the owner will say.. yes, you guessed it, the powerful word “no!”

Dogs don’t use words as we do, and as such, they often don’t understand many things we tell them. The word “no!” used to tell Rover to stop chewing, to stop jumping, to stop stop digging, to stop begging, to stop pulling and to stop all those different things dogs do that we don’t like, isn’t perceived by dogs in the same way we perceive it.

So if dogs don’t really understand what we are saying, then why do some dogs often stop in their tracks upon hearing us say “no”? Following are several explanations as to what dogs may be actually perceiving when we say the magic word “no.” 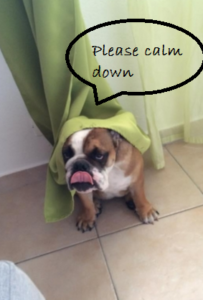 Think dogs understand the word ‘no’? Here’s what’s likely happening. When the dog owner says “no!” in a firm “I mean business” tone of voice, the dog is simply responding to the owner as if responding to a dog who is growling and snarling. No exact meaning is attached to the word no as to “stop jumping, stop digging or stop begging.” Therefore, the dog is not stopping any particular activity, but is actually stopping ALL activity, explains veterinarian Myrna Milani, in the book “The Body Language and Emotion of Dogs.”

“Using the word “NO” means nothing to a dog, he is not born with an understanding of the word “NO” or any other word for that matter.”~Georgina Lees-Smith

What to do instead:  here’s an easy exercise: try to stop relying on the word “no” and instead do some troubleshooting, figuring out what you really want your dog to instead. Write these behaviors down and and start practicing them when the problem behaviors are NOT occurring. Make these behaviors really fluent so that you can ask for them when you notice your dog is about to engage in a troublesome behavior. 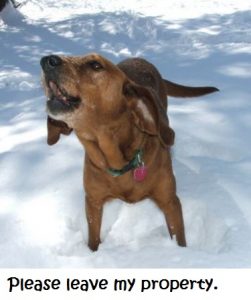 “I Don’t Understand You”

When we tell a dog “no” we are not understanding our dog and our dog is not understanding us. This makes for some mass miscommunication! For example in the case of a dog who is barking at the door, we may tell the dog to quiet down by saying “No!” But what is really going on in Rover’s mind? Rover may have heard a noise, perhaps somebody walking close by the door and by barking he is announcing an intruder. “There’s somebody coming close!” he barks to alert the owner. The owner instead remarks “No!” while the dog keeps barking as if saying “Yes, yes, there is a person walking by, I just heard him with my sensitive ears! Don’t believe me? Check it out!” This leads to a profound form of cross-communication that often leads to dog owners further raising their voices, remarks veterinary behaviorist Karen Overall in the book “Manual of Clinical Behavioral Medicine for Dogs and Cats.”

What to do instead: In this case, rather than raising the voice to tell the dog “no” a better option may be to acknowledge the dog’s barking by looking outside and thanking the dog for alerting, then possibly giving the dog something else to do such as sit or lie down and rewarding with a tasty treat or a toy. 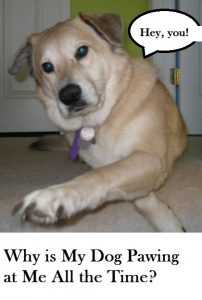 While in some dogs the word “no”may suppress any behavior they engage in, for some attention seeking dogs, the word “no” may have the opposite effect. For these dogs. the word “no” has actually become a powerful word that has become associated with attention!

These are often bored, under stimulated dogs who may appreciate any form of attention, even if of the negative type. So when their owners come home from work, these dogs are looking forward to doing anything that just gets the owners’ attention away from watching a TV show or talking on the phone. “Me, me, please pay attention to me! ” So these dogs start chewing on the remote, barking at the owners or insistently pawing at them or stealing an item and taking off with it in hopes of gaining the owner’s attention. If the word “no” is incorporated in the owner’s reaction, it often becomes a signal that the owner is now paying attention to the dog, looking at him and talking at him or even “playing with him” as seen with dogs stealing items and having the owner yell “no” as he starts chasing him around in a fun game of keep away.

What to do instead:  Dogs have needs too! Provide your dog with the right amount of exercise and interaction before sitting down in the evening. Then as his energy is drained off, provide a quiet, yet mentally stimulating activity for your dog such as working on a stuffed Kong or other type of puzzle that can provides several minutes of entertainment. When commercials come on, why not do some fun, yet brief training sessions with your pal? 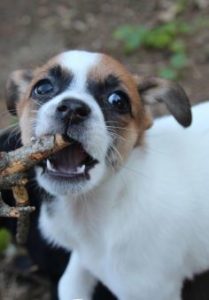 On the other hand, there are dogs who care less about the word “no.” Indeed, the word “no” has become just as irrelevant as the birds chirping in the trees during the day or the crickets singing during the night. Often this is the result of dog owners repeating the word no over and over like a broken record, and the dog has no clue what the dog owners mean so they have learned to just ignore it.

This is something often seen with new puppy owners. They follow their puppy around the house as the puppy starts investigating. The puppy chews on a shoe and the owner says ” no!” The puppy next steals the remote and the owner says “no!” Because all these “no” do not have an immediate consequence such as diverting the puppy’s attention to something else or providing a brief timeout to a boring room, they go to deaf ears or the puppy may also think it’s a fun game.

“The power of the word ‘no’ is totally lost on the dog who hears it used repeatedly, thus learning to ignore it. “~Sue McCab

What to do instead: manage your puppy’s environment so he’s not allowed to repeatedly rehearse problem behaviors which put him into the position of failing. So if say your puppy chews on your shoes, why not stop leaving those shoes around in the first place? “Out of sight, out of mind,” is quite a powerful management technique! Instead, leave around all the toys your puppy can play with so he’s set up for success and every body is happy.

“I Don’t Care About Your Needs” 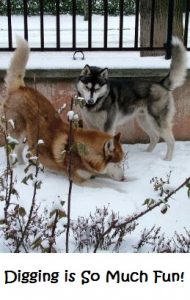 Many behaviors that trigger the word “no” are instinctive, natural behaviors that dogs may find self-reinforcing. When a dog is stopped from performing an undesirable behavior (from our perspective of course!),  often a behavior vacuum is likely to take place. Deprived from performing the natural behavior, the dog may feel frustrated and try to find another replacement behavior just to fill up the void. So if Rover is told “no” every time he tries to dig in the yard, at some point he may get frustrated from not being able to perform this natural behavior, so he’ll likely fill the void and decide to start chewing on the water hose instead.

What to do instead: A better option is instead to give a dog benign activity to engage in that meets his natural desires such as getting food out of a stuffed Kong or shredding a cardboard box so that it can fit nicely in the trash can.

If dogs don’t understand exactly what the word no means, then it’s not fair to use it, or if it must really be used, it should be simply used as a way to re-direct the dog to performing a replacement behavior. This can be an option if it’s said in a neutral tone and the word hasn’t received excessive negative connotations in past. There are several great things dog owners may do to improve their relationship with their dogs. Management is a great tool to use at least until the dog has had an importunity to being trained. Providing outlets for natural behaviors using benign, innocent hobbies (puzzles, interactive toys, designated digging areas) is important. Replacement behaviors are great as they can fill the void and help your dog make good choices because they have a strong reinforcement history. A win-win!